SHANGHAI, China — If anyone understands the challenges of making reform happen in China, it is Lv Xiaolei. But the powerful vice secretary-general of Shanghai Fashion Week — called ‘Madame Lu’ by reverent insiders — is on a mission to transform her event into the premiere designer showcase in China.

“We want to not only become the leading fashion week in China, but also a requisite stop for international buyers,” Lv said at the latest Spring/Summer 2017 edition of Shanghai Fashion Week, held from October 12 to 19. “What we aim to do here is tap outstanding designers and help them to build a stable platform.”

During her 18-year tenure, Lv has overseen the fashion week’s maturation, watching new dynamics and adapting best-practice from fashion weeks abroad to become one of China’s most important fashion weeks. A trip to Berlin Fashion Week, Burberry’s “see now, buy now” and integration of men’s and women’s lines touched her the most.

Shanghai Fashion Week’s main rival, China Fashion Week, began in 1997 and is held biannually in Beijing. The next edition will take place from October 25 to November 2, where established names such as Jefen and Ellassay regularly show.

But according to Lv, these are just two of around 30 fashion weeks held each year in different cities throughout China with various kinds of support and subsidies from local governments as well as totally different participation criteria, motivations and objectives. The fashion week in Shenzhen is one of the more well known among the new entries.

The result of this multiplicity has been that some Chinese designers became distracted or confused when choosing a showcasing platform. Perhaps this explains why critics contend that Shanghai Fashion Week’s designer roster has not been as consistent as it should be.

Designers have to be energetic but it’s not necessary to be totally exaggerated or nuts.

In spite of this, Shanghai Fashion Week has emerged as the country’s most globally-minded event and one that has embraced innovation. It certainly has come a long way since its launch back in 1998, as demonstrated by the progressive collections shown this month by young Chinese designers such as Shushu/Tong by Liushu Lei and Yutong Jiang, Angel Chen, Dido Liu’s Deepmoss, Xu Zhi, Staffonly by Shimo Zhou and Ya Wen and Ffixxed Studios by Kain Picken and Fiona Lau.

But with the cluster effect of Shanghai Fashion Week magnifying, more young designers applied to present at Labelhood, which took place at a cool, scenic location on The Bund. In addition to the official agenda, there were many unofficial showrooms and events this season.

“Because of this, many fashion vendors and suppliers were even short of venues and equipment. Xintiandi, Rockbund and 800 Show, all of these area's sales and businesses have been significantly increased by Shanghai Fashion Week,” Lv said. 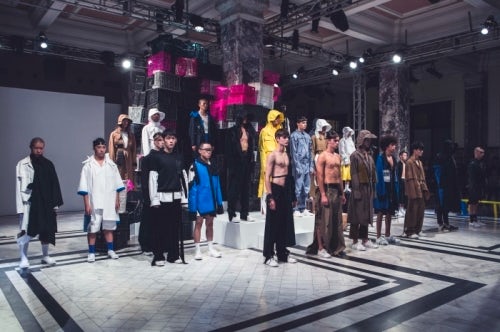 Numero China’s editor-in-chief, Karchun Leung, suggests that some of the designers showing needed more restraint. “To present on a platform like Labelhood, you have to be energetic. But they need to note that it’s not necessary to be totally exaggerated or nuts with your design,” he says. “At this moment in time, it’s essential for more of them to develop their own design language."

GQ China’s fashion director Dan Cui seems to agree. “What some designers are missing is not ideas and creativity, but a deep understanding and perception of the market dynamics,” he says. This season, GQ China collaborated with Shanghai Fashion Week and will select the best menswear designer on the GQ Day in Labelhood, sponsoring them to attend London Fashion Week Men’s.

Lv concedes that Shanghai Fashion Week’s showrooms and trade shows have yet to fully blossom. “We still need to focus on segmentation if we want to grow step by step, encourage healthy competition, and make sure these platforms each have their own personalities and styles from which the press and buyers can choose their market positions. Little changes add up to something great,” she says.

According to Echo Zhuang, former buyer at Lane Crawford, 10 Corso Como and Yoox, a professional industry body is urgently needed to collect and allocate the resources because the pace of development in China is so fast. “But Shanghai Fashion Week has done a good job adapting to the changing environment and balancing between the local market and international standards. Also, I look forward to seeing it take a regulatory role to lead the market in the industry environment of great changes,” she says.

“There would be no Ontimeshow without Shanghai Fashion Week [SFW],” says Yeli Gu, the founder of the trade show where brands such as Tommy Zhong, Min Wu and KKtP were presented to Chinese and international buyers. “SFW helped improve our professionalism [and] it produces a great sense of cohesion [between the platforms it oversees or orchestrates].”

Despite China’s economic slowdown and fears of a luxury retail slump, many Chinese designers present their collections in Shanghai to access the domestic market, even if they already show in London or Paris.

The 1436 X Uma Wang collaboration could become a real benchmark.

Fashion designer Angel Chen, who hails from Shenzhen, shows her namesake label in London, but also chose to present her collection at Shanghai Fashion Week’s Labelhood which she says is less restrictive and “open to all.”

Thanks in part to Lv, the government’s support for China’s fashion industry has increased — in particular by the Shanghai municipal government’s support of fashion week through venues and logistics. Looking at the latest season of Shanghai Fashion Week, it is clear that there is less of an obsession with ostentatious shows and more of a focus on bona fide B2B strategies aimed at supporting local talent.

“But I do want to find a new venue for China’s large, excellent commercial fashion brands in the future so that they can stage fashion spectaculars at scale transforming the venues as they want,” says Lv, a strategy that coincides with current market trends where Chinese brands spend lavishly on product launches. 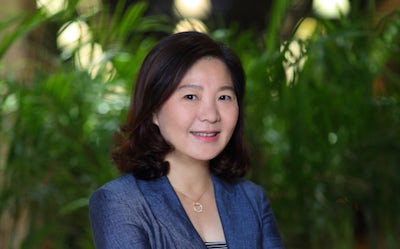 In addition to a series of forums and talks for professional audiences, Lv will also launch Shanghai Fashion Weekend next year, a consumer orientated public event. This season, the fashion week organised high brow and pop culture attractions like a special fashion film exhibition by ASVOFF (A Shaded View on Fashion Film), founded by Diane Pernet and an eco-friendly themed project GreenCode in partnership with Lane Crawford, where a “see now, buy now” limited flash sale happened.

Shanghai Fashion Week also cleverly tapped the fashion as entertainment card by presenting Fashion Rocks, the first of its kind held in Asia. In partnership with Chinese fashion and event specialist Apax, where Chinese designers like Sankuanz’s Shangguan Zhe and international brands including La Perla and Dsquared2 put on a spectacle with musicians Coco Lee, Charli XCX and Usher. In past editions, luxury brands like Lanvin, Salvatorre Ferragamo and Jean Paul Gaultier have presented at SFW.

“We stopped doing individual international brand fashion shows this season, trying instead to tap their commercial value [in other ways like Fashion Rocks]. By mixing entertainment and fashion, we hope the public can engage with fashion week better,” Lv explains, referring to the model used by Seoul Fashion Week where K-pop celebrities attend and show support for their favourite Korean designers.

Notwithstanding the success of Labelhood, observers maintain that Shanghai Fashion Week needs more strong commercial brands in the main show venue — brands that can one day become synonymous with the event in the same way that Marc Jacobs is for New York or Prada is for Milan. The event’s influence would grow, they say, if the fashion week committee can attract more of the grand scale domestic fashion brands that are in urgent need of transformation, and bring more trade fairs into the official calendar.

"It’s the 1436 X Uma Wang collaboration that could become a real benchmark," Lv concedes, suggesting that more progress could be made if this generational shift were replicated elsewhere and young, cosmopolitan Chinese designers transformed big Chinese apparel brands, thereby closing the gap between them.