HONG KONG, China – With over 270 million monthly users, Chinese technology company Meitu is in the business of vanity. The company has several apps, but their most famous one is MeituPic – China’s number one photo retouching app. It gives users the ability to alter their appearance with surprising flexibility and specificity.

Yet what is most notable about Meitu Pic is its uniquely Asian features and filters. There are functions to smooth skin, slim the face, add makeup, attach cute stickers, and enlarge one's eyes. Similar to MeituPic, Japan’s Line Camera and South Korea’s Snow also offer facial enhancement features.

While these selfie apps may differ in terms of functionality, they all help users to beautify themselves in ways that are telling about the markets they serve. They provide an interesting lens on how women in three East Asian countries view beauty ideals – and why certain beauty products succeed in an increasingly influential region. 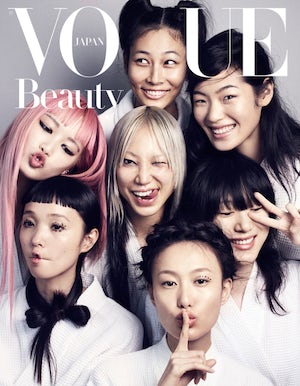 The cover of Vogue Japan, September 2016

A sweeter aesthetic than in the West

Traditionally, East Asian women have been held to a standard of feminine beauty that suggests they should be sweet and gentle. In some ways, not much has changed. Flattering words like “aegyo” in South Korea, and “kawaii” in Japan still convey the notion that attractive women are those who style and groom themselves in a way that is cute and soft.

One example of this in China is Fan Bing Bing, who is considered by many to be a feminine ideal. She possesses porcelain pale skin and a slender, heart-shaped face. Her charcoal black hair is both long and lush, and her large Bambi eyes are complemented by a wide set of gently-arched eyebrows.

This aesthetic contrasts greatly with Western standards, where a supermodel like Gisele Bündchen is prized for her athletic figure, bronzed complexion and extroverted, sexual aura. A quick browse through Instagram reveals a clear disparity between East Asian and Western feminine ideals.

“Part of this difference [in beauty standards] comes from the fact that the East equates beauty to balance. The aim is to balance yin and yang in order to achieve inner health and outer beauty,” says Wei Young Brian, founder of traditional Chinese medicine beauty brand, Wei Beauty. Balance in this sense creates an ideal of moderation and wellbeing as pillars of attractiveness.

While the importance of health as part of a beauty regime has been touted in the West in recent years, this concept has long been understood and appreciated in East Asia.

“Chinese herbalists have concocted special tinctures, tonics and elixirs for over 5,000 years to specifically address individual skin concerns. This knowledge has passed down from generation to generation and is what we use today to formulate many of our beauty concoctions,” Brian explains.

The influence of Hallyu and ‘K-Beauty’

“Korean women tend not to put so much colour cosmetics on their face, as the tendency is not to look too glamorous. Instead, they are more keen to achieve a pure and minimal look,” says Hye Ran Ji, team leader of Amorepacific’s brand management team.

Ji elaborates: “For Korean skincare, you need skill, patience, time and energy to put on makeup – to give the appearance that your skin is naturally perfect. Most Korean women use at least four or five products just for basic skincare … Many of them also use at least seven or eight products for their evening skincare routine.”

Most Korean women use at least four or five products just for basic skincare.

The international expansion of ‘K-Beauty’, South Korea’s beauty industry, has gone hand in hand with Hallyu, the global rise in popularity of South Korean culture since the late 1990s. This includes fashion, film, food, K-pop music and beauty.

“One example of the kind of woman who embodies this feminine ideal is Suzie Bae, who is a member of K-Pop idol girl group Miss A. She has a natural look, with bright, flawless skin and long hair. Compared to other stars, she’s not considered to be a trendsetter when it comes to fashion [but] this fits her image and many Koreans have dubbed her the ‘nation’s first love,’” explains Ji.

Indeed, Bae’s look couldn’t be more different than that of her compatriot Chaelin Lee, a pop star better known by her initials CL whose rising status as a global style icon has been aided by her tough girl demeanor and a sultry, experimental hair and make-up combination.

Either way, the influence of K-Beauty is not to be underestimated. According to market research firm Euromonitor, the country’s beauty exports were valued at US$207 million – a staggering increase of 59% from the year before. No wonder brands like Sulwhasoo, 3 Concept Eyes, Tonymoly and Amorepacific are fast becoming household names abroad.

Cosmetic surgery also draws in large numbers of international clients thanks to the country’s reputation as a leader in surgery techniques and trends, with one of the highest rates of surgery per capita in the world. 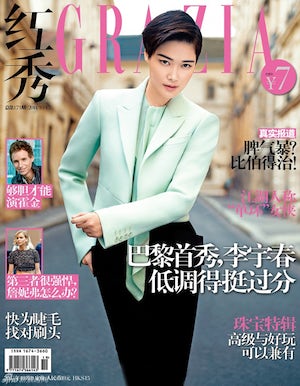 Li Yuchun on the cover of Grazia China |Photo: Courtesy

Whilst women in East Asia place a great deal of emphasis on preserving a youthful appearance, there are both timeless and evolving perspectives on beauty standards for older women. It can be challenging to strike a balance between guarding values of filial piety and overcoming elements of a patriarchal society.

“[The actress] Haruka Igawa is one example of a top-selling cover celebrity in Japan. She has a very clean, natural look as a mother, and is considered a woman many would like to be,” says celebrity hair and makeup artist Aburaya Yoshiaki. “Two others are Yo Yoshida and Yuki Amami, who are considered beautiful, single working women who don’t need to depend on [anyone else].”

Older women representing mainstream beauty ideals in China include Gong Li, the first Chinese ambassador for L’Oreal Paris 20 years ago, and Qin Yi, a 94-year old actress active before the Cultural Revolution who made a comeback in the 1980s.

Natural, matriarchal beauty templates may still be the norm for women of a certain age but there is also a growing acceptance and popularity of young women experimenting with gender definitions. Chinese singer and actress Li Yuchun is a modern day example of someone who straddles this line of androgyny. Earlier this year, she posed on the cover of T Magazine China for their menswear fashion issue.

Another figure is Amber Liu, a rapper and singer who is a member of Korean group F(x). Whilst Liu initially faced an initial reluctance by the general public to accept her platinum cropped hair, snapback hats and baggy shorts, audiences are warming to her boyish beauty.

Similarly, many Asian men are experimenting with their feminine side. Korean rapper G-Dragon has flirted many times with women’s products, including his regular use of make-up and wearing clothes from Chanel’s womenswear collections. Japanese beauty brand Shiseido highlighted the blurring lines between gender late last year in a viral advertisement called “High School Girl?”.

Haruka Igawa has a very clean, natural look as a mother, and is considered a woman many would like to be.

The video depicts a group of girls in a classroom setting to a soothing ballad of a girl, before the illusion is destroyed. As the film moves backwards, the viewer quickly realises that the entire cast of schoolgirls are young men who have been disguised with the help of make-up, hair and beauty products. The film illustrates the blurring of male and female beauty in parts of East Asia, and how easy it can be to move along the gender spectrum.

According to Ritchie Chan, founder of the multi-brand boutique Triple Major which has outlets in Beijing and Shanghai, this movement toward genderless beauty is having an impact at fashion retail too. “Most of our younger female clients are quite comfortable with unisex clothing [and many now] end up purchasing men’s styles too,” he says.

An important factor in the East Asian beauty industry is the influence of family and society on life choices and consumer behaviour. One striking example was highlighted earlier this year by Japanese brand SK-II when the company conducted the Global Dreams Index. The survey revealed that 81% of women in Japan and 67% of women in Korea admitted that they had stopped pursuing their dreams due to factors such as societal pressure – the highest in comparison to the rest of the world.

These alarming findings propelled the brand to launch their Change Destiny initiative. The marketing campaign encourages women to dream again, and to break free of the outside forces that suppress them. They include stories of courage and strength from inspirational figures like Sayaka Osakabe, a women’s right activist and professional tennis player Chan Yung-jan.

One video in particular by SK-II, entitled “Marriage Market Takeover”, looks at the crippling pressure surrounding women from China to marry before they turn 25. The film explains the kind of social pressures these women face, before helping them to re-frame ideas of self-worth, independence and happiness around notions of beauty by engaging with the family members who pressurized them in the first place.

This narrative of female empowerment is quite different from a brand like Dove and its campaign for real beauty, which resonated well in North America by focusing on a more diverse notion of beauty but on a less nuanced understanding of individuality.