ATHENS, Greece — Impressively, despite starting up in the middle of Greece’s economic crisis, a time of violent protests against austerity cuts and mass trade union strikes across the country, footwear brand Ancient Greek Sandals has achieved an average rate of growth of 51.69 percent since its launch in 2012.

“It wasn’t devastating, but it was difficult,” says Nikolas Minoglou, co-founder and chief executive. “Thank god that we are self-financed and we did not need a loan, because it would have been impossible. The general environment is simply not business friendly. The VAT that we collect is not easily returned to us, bureaucracy is long and difficult and taxes are high.”

In 2013, unemployment in Greece reached 26.8 percent — the highest in the EU. The same year, Ancient Greek Sandals grew 73 percent and leapt in production from 26,000 to 45,000 pairs of shoes. “Our main factory was able to handle our growth — the Greek crisis was an ally in that. If it were not for the Greek crisis the factory would have been busy with other projects,” Minoglou continues.

The brand’s stockists now include Colette, Barneys, Selfridges and Le Bon Marché and it has global reach through Net-a-Porter, Mytheresa.com and Matchesfashion.com. In addition to wholesale accounts, direct-to-consumer e-commerce has always been part of the business. Minoglou bought the URL ancientgreeksandals.com in 2006. “We always believed in the importance of having an impeccable online store, it helps with brand awareness and end customer feedback.” Currently, the site accounts for 15 percent of the brand’s sales.

Today, the brand projects total revenues of €8 million for 2017. Its rapid success can be attributed to insightful positioning and a laser-focus on product. “The market was missing a sandal brand with a concept behind it. Handmade sandals with a raw aesthetic, but feminine and urban, not just for the beach and not super expensive. I still think the strongest part of the brand is the concept,” says Christina Martini, co-founder and creative director of the brand. 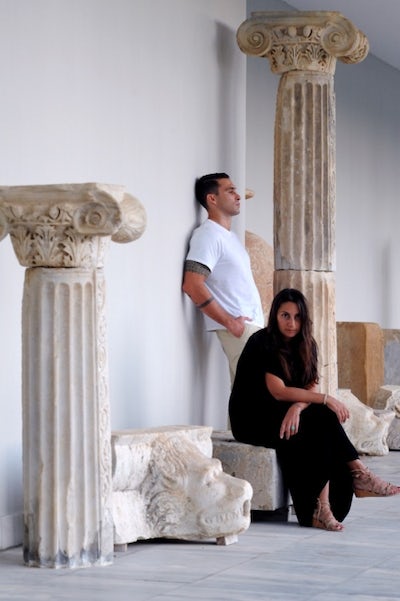 “I always liked the touristic sandals that you can find on the islands, and around the Acropolis. So, it was in the back of my mind that I would like to do something with the sandals, but I had a very good job working in Paris, at Balenciaga (2008 – 2010) and Louis Vuitton (2010 – 2012), and I didn’t think I could do it alone… Then I met Nikolas, he had a good business background and the same idea — we realised that we had to do it,” she continues.

Introduced through “a good friend,” the co-founders first discussed the idea that would become Ancient Greek Sandals over dinner in 2010. Hellenic by descent, Martini and Minoglou cut their teeth outside of Greece, Martini through her time in Paris and her student years at the esteemed Cordwainers College in London. Minoglou in Boston, gaining his MBA in Entrepreneurship at Babson College.

“We made perfect business sense. I had got my MBA and I really wanted to do something in my country, I love Greece,” says Minoglou. “Often partnerships happen between old friends or couples…” he continues, before, in practiced synchronicity, his partner interrupts: “It doesn’t have to be that way. It is not necessary. You don’t have to be friends, we weren’t friends before, but we are friends now. I couldn’t do what Nik does and Nik couldn’t do what I do, and we respect that,” says Martini.

A year and a half after their initial meeting, having agreed to go into business with each other, “on the side,” as Minoglou puts it, the new partners began to manufacture samples of their brand. Minoglou chose a small production facility on Crete for production. “It is very important to know how the product is made and what the actual production costs are. One should enter a manufacturing agreement having researched the production cycle,” he cautions.

Equipped with samples, the partners took their product to market. “We couldn’t go along to all of the trade fairs, so we had to find a sales agent. There are not many showrooms where we wanted to be, because you have to find relevant brands that have the same look as you,” says Martini. The brand signed with Rainbowave, Maria Lemos’ influential showroom and sales agency.

Distinguished by a winged buckle, inspired by the personal motif of the sandal maker to the Greek gods, whose workshop was also on Crete according to legend, the first collection of 31 styles ranged from refined updates on traditional sandals, to more editorial styles with exaggerated gladiatorial ties, studs of semi-precious stones or stylised wings flanking the ankle, à la the original Hermes. The commercial response was immediate. The first order ran to 6,000 pairs, and the brand had an immediate boost when Net-a-Porter signed on as the first stockist.

On the back of this, Minoglou and Martini turned their full attention to their fledgling business. “We invested $60,000 into the business between us. We also had something of a base because my family’s business is shoes so we had use of a warehouse, and that helped a lot,” says Minoglou.

But the brand’s early success was both a blessing and a challenge. “The factory wasn’t sure if it was going to be able to produce and deliver on time. We expected a maximum order of 1,000 not 6,000. We had to make sure that the quality of the shoes was up to standard, so we had to make it twice in fact,” explains Minogolou.

Always launch a brand with two producers and end up with three in the long run. This gives you negotiating leverage.

Positioning itself as luxury, if not ultra-expensive footwear, required the brand to ensure the quality of its production was flawless. Martini’s previous experience was invaluable. “At Balenciaga and Louis Vuitton I went to Italy all the time, working with the best factories — learning their standards of quality and attention to detail. We use Italian leather in our sandals so all of that research and my knowledge of the leather was crucial,” says Martini. In time, it became apparent that the Cretan manufacturer was unable to deliver product in necessary numbers while meeting the necessary quality.

“Luckily, I spent a week visiting five prospective producers around a month before we stared noticing the serious issues with our production in Crete,” says Minoglou. “The initial idea was to find an additional producer in order to be able to handle future growth. When the problem arose, we immediately ran to an Athenian producer, they saw the opportunity and agreed to help. Now, I would advise people to always launch a brand with two producers, and end up with three in the long run. This gives you negotiating leverage and stops your brand being in total jeopardy due to factors affecting your production.”

It was during this time that Minoglou and Martini first appreciated the importance of cash flow. “In the beginning cash flow is more important than profit. We have never used external financing so we basically had to grow from within. It came close a couple of times in the first year, because we were training the factory and we had to use the money from the sales of the shipment just shipped to fund production,” says Minoglou. 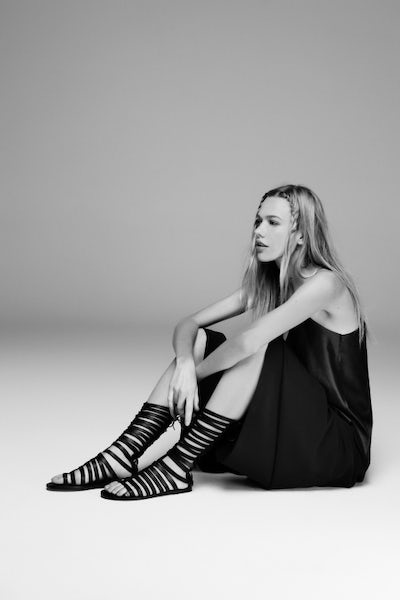 While expanding its wholesale network, Ancient Greek Sandals further defined its product strategy. Four of the brand’s most classic styles account for 20 percent of total sales and 50 percent of the collection is repeated each season. “Our customers are happiest with our entry priced sandals €130-160 ($195-240). We introduce new materials, new colours, and of course I make some new designs,” says Martini.

The brand has also entered into collaborations with Peter Pilotto, Carven, Marios Schwab, Ilias Lalaounis, Dosa and Caramel Baby and Child. Those collaborations and an editorial aesthetic have given the brand a high profile in the style press. The brand has appeared in international editions of Vogue, Harper’s Bazaar, Elle, InStyle and the fashion pages of The New York Times, its first editorial.

Minoglou and Martini see direct feedback from end consumers and the opportunity to create a retail template (that could be replicated in future projects, including shop in shops) as persuasive inducements to invest in own-retail. “We are going to start in either Athens or Mykonos, but it has to be Greece,” says Minoglou.

In terms of wholesale, although the brand has identified Japan as a key target market for 2016/7, it doesn’t intend to sign on a slew of new international stockists. “We want to grow through deeper buys. We can’t grow x10, we don’t have the production capability to do that, but we could feasibly double or triple production,” says Minoglou. The brand is also expanding its product offering to tap growth levers like men’s and leather accessories. However, Minoglou and Martini do not want to diversify too far beyond their core product.

“We have established a sandal brand and we want to grow without losing our uniqueness. It is most important that there is an aspirational quality to our goods. We are very affordable but our product sits on a shoe floor next to Céline. There are not as many brands that can do that,” concludes Minoglou.

What Would a Grexit Mean For Luxury Fashion?

Charlotte Olympia Dellal Says Believe in Product and Yourself