Dior and Louis Vuitton led fashion division sales that jumped 37 percent compared to 2019, ‘smashing’ expectations. How did they do it? 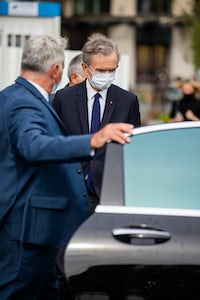 Dior and Louis Vuitton led fashion division sales that jumped 37 percent compared to 2019, ‘smashing’ expectations. How did they do it?

LVMH was the first luxury company to report first-quarter revenue Tuesday, and a sharp jump in its fashion division’s sales not only point to a return to pre-pandemic health for the conglomerate, but have raised the stakes for its competitors.

Sales in the Louis Vuitton and Dior powered fashion unit grew 37 percent over 2019 (a more apt comparison as 2020′s results were coloured by the pandemic’s impact), and as much as 52 percent compared with the prior year’s quarter, when lockdowns first swept through the key Chinese market and subsequently Europe and the US.

Double-digit growth in its wine and spirit division, home to brands like Hennessy cognac and Veuve Clicquot champagne, also helped drive a rebound.

It wasn’t all good news: the retail unit, home to beauty giant Sephora and airport shopping chain DFS, saw steep declines in its retail activity. Sales fell 5 percent versus Q1 last year — and by 30 percent compared with the same period in 2019 — as the division was penalised by a new round of retail shutdowns in Europe due to coronavirus, as well as by the absence of a recovery in long-haul travel.

Overall, though, the group’s revenues rose 8 percent over 2019, and 32 percent over last year, with revenue at 14 billion euros (or $16.72 billion). The report “smashed” expectations, Bernstein analyst (and BoF contributor) Luca Solca said in a note to clients.

It can be challenging to pinpoint exactly what’s driving the rapid rebound, as LVMH doesn’t report numbers for individual labels or often comment on their strategies. But there are a few clues.

First, Louis Vuitton got a major boost from repeatedly raising prices over the past year (in March, April, and January), a move that helped to offset lower volumes due to the impact of the coronavirus.

On top of the price hikes for identical SKUs, the brand benefited from having embraced the popularity of smaller bags, releasing new, more expensive logo styles like the $2,050 “Multi-Pochette” crossbody. That design, which first debuted in late 2019, has been steadily rising in popularity and helping to upsell clients who might have otherwise gone for a cheaper mini-bag.

Since the pandemic’s start, the most famous brands with an unimpeachable clout factor have been the winners in the luxury market. Brands like Vuitton were able to remain top-of-mind for consumers even without walking past storefronts or stumbling across their products in a department store display. Occasional or first-time luxury buyers who were stuck at home, itching to spend their money on something as vacations and restaurant-going were restricted, seem to have boosted luxury sales — and Louis Vuitton is a brand almost all of those less fashion-forward clients are sure to know.

At Dior, LVMH had wanted to lean into the significant momentum the brand was enjoying before the pandemic. Loathe to let up on the gas any longer than they had to, the brand hit the market hard and fast with marketing investments last summer including pop-up stores on the Mediterranean coast, live-streamed fashion shows, a hit collaboration with Nike and a sprawling museum exhibition in Shanghai. Though many consumers weren’t yet ready to shop again, the moves helped make sure Dior went to the top of their lists when they were.

As first quarter results show, the brand is still reaping the benefit of that high visibility compared to less well-funded rivals who had to freeze spending for longer. Dior was the only LVMH brand to grow faster than the fashion division’s average, CFO Jean-Jacques Guiony said, though he declined to say by how much.

Loewe, Marc Jacobs, and Celine were also called out for strong performance at the start of the year, though they grew less quickly than Dior or Vuitton, according to Guiony.

While LVMH set a high bar for luxury’s Q1 results, not all companies are set to fare as well. UBS analyst Zuzanna Pusz predicts outerwear specialist Moncler will grow 1 percent versus 2019, while shoemaker Tod’s could fall by 23 percent. Kering’s flagship brand Gucci is expected to stay 6 percent below 2019 levels.

Why Dior’s CEO Is Pushing Couture in a Pandemic