LONDON, United Kingdom — Housed in what were previously the men’s toilets of London's Old Street Tube Station is Ejder, a small boutique that has become something of a streetwear institution.

More unique than its physical location is Ejder’s trajectory. Established in 2012, Ejder began as a digital retailer. But in 2014, the company partnered with Appear Here, a London-based firm that helps businesses find and book short-term retail destinations. A series of pop-ups led Ejder around the globe, from central London to Paris to Toronto, before eventually settling in its semi-permanent Old Street space.

In establishing these temporary brick-and-mortar outposts, Ejder successfully tapped into the dedicated consumer strongholds it had cultivated online. By providing a physical experience, Ejder not only drove sales offline but built brand recognition and engagement.

“How I execute these [pop-ups] is based on my relationships with people in these territories,” explains Simon Suphandagli, founder and creative director of Ejder. “It’s not a prescriptive thing. It’s a community effort.” Furthermore, by using the pop-up spaces as venues for events, Ejder created relevance in an increasingly crowded market. “That’s the defining word for me: relevance. We see ourselves as being able to create cultural moments. It’s not just about serving products.”

"The pop-up concept [is] a great acquisition channel, branding technique and way to increase spend per person,” explains Michelle Malison, a research analyst at Euromonitor International. “Additionally, it’s low risk especially now that retail real estate is not doing well — you don’t have to spend as much as you would in order to open a full store. Retailers can use pop-up stores to test potential locations before fully committing.” 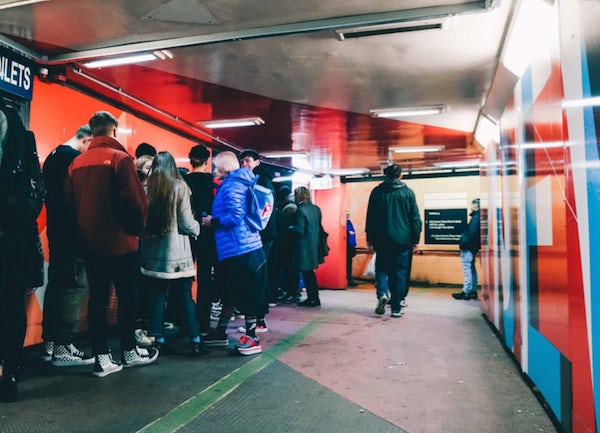 In the past year, however, pop-up shops have proliferated on a mass scale. What was once a guerrilla strategy that allowed emerging brands to level the playing field has become a mainstream weapon, adopted by everyone from Louis Vuitton to Kanye West.

The lines are blurred. It’s not about talking about pop-ups or long-term. I think now it is just retail.

The pop-up’s spike in popularity can be attributed in part to the shifting tides of real estate. In London, landlords have become more accepting of short leases. In New York City, as vacancies increase throughout parts of Manhattan, rent has dropped.

“Retail leases in traditional high street shops are getting shorter every year. They’ve gone from about 25 years [to just] three years,” says Ross Bailey, founder and chief executive of Appear Here. “And in places like New York at the moment, there is a huge amount of vacancy, and we’ve seen a massive price discrepancy.”

According to London’s Centre of Economics and Business Research, pop-ups contributed £2.3 billion to the UK in 2015, up 12.3 percent year-on-year. About 44 percent of all consumers surveyed by the centre had visited a pop-up shop within the year, with the keenest consumers aged 18-34, evidence of the format’s resonance with younger consumers, who tend to eschew traditional shopping experiences.

But has the widespread adoption of pop-ups weakened the effectiveness of the format? Smaller brands have neither the financial nor marketing resources to stage pop-ups that match the scale of their larger counterparts. Last year, Kanye West launched a global string of pop-ups in 21 cities around the world, selling merchandise from his "Life of Pablo" music tour. When compared with this, a one-off pop-up store without a celebrity hook or gimmick pales in comparison, making it increasingly difficult to grasp media and consumer attention.

In 2017, competition in the pop-up space is expected to intensify further. Euromonitor predicts an increasing number of brands will use temporary stores as a means of supplementing online platforms with a physical point of interaction with consumers.

Nevertheless, mainstream giants remain keen to adopt the strategy, seeking to create similar cultural moments like Ejder. “Pop-ups are an integral part of the strategy of our launches,” explains Alegra O’Hare, vice-president of brand communications for Adidas Originals. When Adidas partnered with Alexander Wang last fall, the pop-up format was an effective launchpad. “It is less of selling per se, but really creating a tone of a kind, experience with creativity and originality at the heart of the project."

It is tough and it is going to get tougher, because of who you are going up against.

Appear Here, which works with fashion brands ranging from Christopher Shannon to Net-a-Porter, launched around 80 pop-up shops in its first year of business three years ago. In 2016, it established upwards of 3,000 shops in London, with 200-300 for fashion brands during December alone.

For Bailey, the popularity of the pop-up signifies an evolution in retail. “The lines are blurred. It’s not about talking about pop-ups or long-term. I think now it is just retail. Ultimately, it probably makes more sense for the brand to not have the store as a massive liability in their cash balance as it was previously.”

Looking forward Bailey predicts, “We will see this more in fashion retailers. How do we convince people that it matters today rather than down the line?”

Euromonitor's Malison agrees that the pop-up landscape is more crowded than it used to be. "The real challenge for retailers experimenting with pop-up stores is to introduce pop-up concepts that are closely aligned with their brands, not only in design and product, but in attitude,” she says. “It’s not enough to simply open a temporary shop — this won’t be enough to capture shoppers’ attention.”

The difficulties of rising to the challenge, however, are particularly pronounced where smaller brands are pitted against giants. “When, say, Adidas wants to do an idea for a pop-up for a product, look at the size of their audience, their market, their budget and ability to execute any idea that they may have,” says Suphandagli. “I remember, we used to do these [pop-ups] — this was us. Now I am seeing these big brands doing the same. It does make it a bit more challenging for ourselves.”

To find success in today’s pop-up marketplace, emerging brands must be more innovative than ever to set their concepts apart. Even pioneers of the format like Ejder feel the pressures of competition.

“It is tough, and it is going to get tougher, because of who you are going up against,” says Suphandagli. “We are concentrating now in this brick-and-mortar store. Whether we extend to stay or move, we are a permanent store now.”