The British brand, which in 1999 became part of the LVMH Group, has appointed the Dunhill veteran, whose first collection will be during the Autumn/Winter 2018 season.

"We wanted to have someone who really understood Englishness, had an extraordinary sense of detail with a very strong and specialised menswear background and was going to understand very clearly where we want to go with the brand," says Christopher Zanardi-Landi, who joined the company as president and chief executive officer in April.

Ray, joins Thomas Pink with over 25 years of industry experience. He began his career as a student at Katharine Hamnett, eventually joining full-time and rising to become head of menswear. In 1996, he joined Gucci as a menswear consultant under Tom Ford, eventually being appointed creative director of menswear in 2004. He was tapped by Dunhill as creative director in 2012; a post he left in February 2016.

"I am delighted to be joining Thomas Pink. For those of us who are British, [the brand] holds a strong emotional appeal and potential," said Ray.

The appointment of both Ray and Zanard-Landi are part of a strategy to revamp the brand over the next 18 months. "We think it's a gem of a brand that maybe hasn't had the loving care that it needed," says Zanardi-Landi. "We have been building a strong team in London and I think there are lots of opportunities of where we can take the brand." — Christopher Morency

Much has changed since Hearst founded a dedicated webshop, ShopBazaar, for Harper’s Bazaar in 2011, back when the idea of making magazines shoppable seemed like a relatively simple step for media brands looking to diversify revenue. But the results, including Lucky Shops and the new Style.com, have often been undifferentiated or full of friction.

“A variety of people have been saying for ten, fifteen years that this is a promising area… it hasn’t really come through,” says Rick Edmonds, The Poynter Institute’s media business analyst. He cites the Wirecutter, a product recommendation site — often likened to a modern consumer report — as a successful example. In 2016, the New York Times acquired the company for $30 million.

Where does this leave ShopBazaar, which aims to sell pieces inspired by the magazine’s editorials? A year ago, the site decided not to renew its contract with retail partner Yoox Net-A-Porter Group, which supplied 50 percent of its inventory. ShopBazaar operates a revenue share model like Farfetch, while also working with a variety of different retailers, including Kirna Zabete. While the site declined to share how much it takes from each sale, it said its revenue share percentages are double or triple that of affiliate partnerships, which can range anywhere from 3 to 20 percent.

On Thursday, ShopBazaar is relaunching an optimized site — designed with the creative agency Wednesday —that will feature less inventory and focus on editors’ recommendations. “This will really give us the opportunity to capitalize on the trends, the well story, the beauty story and the Bazaar lists,” said e-commerce director Katie Hobbs.

ShopBazaar has dedicated pages in each issue of Harper’s Bazaar that highlight about 50 to 100 pieces available on the site, which are often a season behind magazine editorials. Those pieces only account for about 10 percent of ShopBazaar’s total inventory, but drive 40 percent of the sales.

“We made a decision that, as all of the fabulous fashion e-commerce sites are about a wealth of product, we had to be first and fast,” said Harper’s Bazaar publisher Carol Smith. “We are never going to be able to compete with a Net-a-Porter or a Matches… But what we can do is be a true reflection of our magazine.” ShopBazaar is still a small operation: last year the site, which also creates branded content for brands, sold $5 million worth of product to 350,000 average monthly unique visitors.

Product will continue to be sourced from boutique retail partners, including Otte, The Webster, and Hamden, as well as its first beauty retailer, Cos Bar.

But some pieces — like a pair of pink Loeffler Randall mules in the May issue of Harper’s Bazaar — will be ordered through a direct relationship with designers in order to satisfy anticipated consumer interest. Instead of holding that inventory, ShopBazaar has started asking partner retailers to buy a volume of certain pieces from brands like Tibi and 3.1 Phillip Lim, while guaranteeing the extra inventory at wholesale cost. “We’ve started tiptoeing into it in the last six months,” said Smith, adding that the team plans to do more of these “shared risk” partnerships in the future — starting with contemporary brands before testing designer level price points.

“We feel really lucky today to have this, especially given the challenges we are facing in the US market — we made all the mistakes five years ago,” said Smith. “It’s a tough year, but ShopBazaar is our shining star.” — Chantal Fernandez

Tim Coppens is to present his Spring/Summer 2018 collection in Paris.

After showing in New York for the five years, Tim Coppens' Autumn/Winter 2017 show at Pitti Immagine Uomo 91 was a European homecoming for the Belgian designer. And it seems Coppens is not ready to return across the Atlantic just yet, today announcing a formal presentation on June 22 during men's Paris Fashion Week. 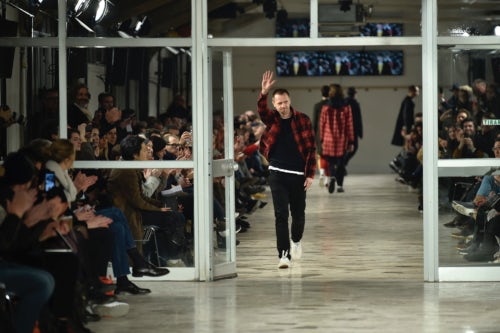 "The main reason for us to show in Paris is to present the collection as a whole and not as a representation in our sales showroom after the show," Coppens tells BoF. "We want to give the collection and the brand more context, so that it gets communicated to press and buyers better. It's the perfect opportunity."

The designer’s namesake label, which launched in 2011, is known for having pioneered the luxury sportswear aesthetic. In 2014, the designer's ready-to-wear brand received the CFDA Swarovski Award for menswear and an LVMH Prize nomination. In June 2016, Coppens joined activewear giant Under Armour as executive creative director of Under Armour Sportswear.

"We're based in New York and it's very much part of the DNA but it's about the crossover with me coming from Europe that is starting to make more sense," says Coppens. "Bringing the collection to New York would be one thing but to [show in Paris] is a good first move that makes sense." — Christopher Morency

Elaine Welteroth, Mira Duma and Derek Blasberg are among the judges for the inaugural Green Carpet Talent Competition.

The prize, which honours the late Vogue Italia editor-in-chief, offers the winner the opportunity to present at Milan Fashion Week in February 2018 and a mentorship programme courtesy of Value Retail.

We’re looking to help shape the future of the luxury industry.

“Our judges bring a heady mix of innovation, insight and authenticity,” says Firth. “We’re looking to help shape the future of the luxury industry. Our winners will combine an intense understanding of tradition, skill and culture with the new demands of sustainability and holistic design, that reflects the realities of the biosphere.”

Created by Eco-Age and the CNMI, the Green Carpet Fashion Awards will celebrate established and emerging designers while focusing on ethics and sustainability.

“It joins two pillars of the strategy of CNMI: new talent and sustainability,” says Capasa. “This project looks to the future of fashion, represented by sustainability, seen through the eyes of emerging designers.”