In a bid to differentiate themselves — or even just to survive — more trade shows will add B2C attractions or launch new services and experiences to improve relationships with their traditional B2B audience.

LONDON, United Kingdom — Trade shows have long been at the heart of the brand-retailer relationship in fashion.

They allowed retailers to buy the next season’s clothes in one place in just a few days and were cost-effective for brands who could see all their retailers, and meet new ones, in one go. They also allowed fashion media and industry experts to stay on top of industry trends.

But as technology disintermediates the wholesale business, old buying models evolve, and the craving grows for experience over exchange, trade shows and showrooms are becoming less important for certain segments of the fashion industry. Some are struggling to stay relevant while others are being discontinued altogether.

Bread & Butter, for example, declared bankruptcy in 2014 and was subsequently bought by Zalando. Under new ownership, the biannual show for contemporary clothing opened its doors to the public, set up digitally enhanced urban environments, held concerts and engaged with celebrities. It was not enough, and the 2019 show was cancelled with no plans for its return. 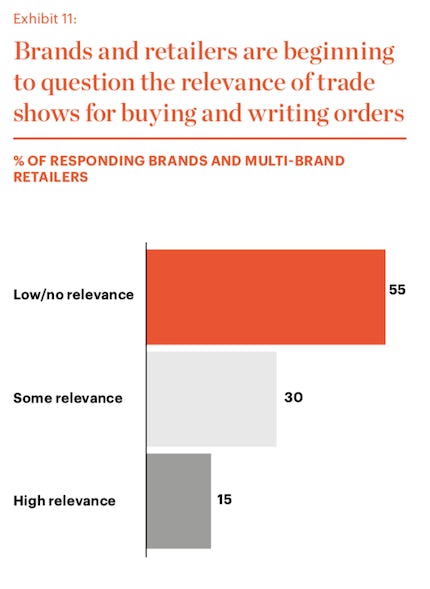 While industry-wide data is hard to come by, US attendance numbers as collated by Trade Show Executive magazine at a number of shows such as Womenswear In Nevada and TransWorld’s Jewelry Fashion & Accessories are showing signs of plateauing in recent years, as retailers pay less attention to such large-scale events. Likewise, more than half of the brand and multi-brand retailer respondents to our 2019 survey agree that trade shows had little or no relevance to placing orders.

One challenge is that fashion seasons have shortened beyond the four seasons traditionally defined by luxury players. Pre-season orders are shifting towards open-to-buy models and, since retailers must keep their websites and windows fresh, this pace of output puts a huge creative and financial burden on brands for whom trade shows are simply not frequent enough.

In addition, digitisation has reduced the need for brands and retailers to physically come together. There are already several online fashion B2B platforms connecting the two parties, such as Ordre, Joor and eFashion Paris. While the very nature of fashion and its tactile properties means that B2B processes may never be completely absorbed by digital — in the same way that online retail still makes up just a fraction of offline retail — there is undoubtedly an impact. This is compounded by buying teams becoming more streamlined and thus being more selective about their travel plans as competition with online retailers has intensified.

“Are we about to see the complete demise of physical showrooms and tradeshows? No, we’re not,” says Simon P. Lock, founder, chairman and chief executive of Ordre. “However, the industry is heading towards an omnichannel approach. While insignificant now, I believe in the next five years, 20 percent of B2B business will happen online.”

There is a third problem for trade shows today. Due in part to the value of harvesting customer data, brands increasingly prefer selling direct to consumers either online or through their own physical stores and select key accounts. As their dependency on distribution via a broad population of third-party retailers wanes, so does the need to invest in trade shows.

In response, major trade shows have already begun to rethink their purpose and focus more on the attendee experience. Trade show organisers are trying to reinvent the concept with new formats, fresh content, and by appealing to new audiences.

Major trade shows have already begun to rethink their purpose and focus more on the attendee experience.

Pitti Uomo, one of the largest men’s clothing trade shows, is held every six months in Florence and attracts 30,000 visitors. In January, the organisers changed things up dramatically and transformed the 16th century fortress where the show is held into a vibrant city square that encouraged networking more than sales. There were street-food stalls, art installations and runway shows. Salvatore Ferragamo and Givenchy have even moved their menswear collection launches from fashion weeks to Pitti Uomo.

Even in China, where the B2B trade show concept itself is much newer, players are striving to bring more to the table than traditional trade shows. As China’s largest fashion trade show, Ontimeshow hosts panel talks and multi-media installations alongside creative showcases for Chinese brands.

Some trade shows have worked on integrating the digital component to improve the in-person attendee experience, streamline the wholesale order process and meaningfully reach buyers that can’t attend. For instance, the Magic show in Las Vegas offers a digital concierge service to connect with brands more efficiently.

“We are starting to see some technical innovation, but this needs to happen in a deeper way as buyers and exhibitors are becoming frustrated with the old-school system,” says Lock. “Where is the technology that identifies a brand’s best buyers when they walk in the door? [Or the technology] that allows you to quickly and effectively place orders, even outside of the three-to-four days of the show? Those that don’t go online won’t be in business in 10 years’ time.”

Alongside these new formats, progressive trade show organisers are ensuring the content of their events is as fresh as the fashion. By focusing on industry issues as well as trends, they give retailers and industry insiders more reasons to attend. ISPO, which organises the world’s largest sportswear show, held a Digitise Summit this year, with a series of events on growth through digitisation.

Pure London, a semi-annual show that attracts 17,000 visitors, chose to emphasise sustainability issues. Its Power of One campaign aims to unite the fashion industry around the topic and it has partnered with the United Nations, actively promoting brands that are helping work towards key sustainable development goals such as ending poverty.

Perhaps the biggest change some trade shows are making is to stop being just about the brand-retailer trade. Opening up to end-consumers is one way to boost attendee numbers and reflects the growing trend for selling direct.

“It’s never just a communication between the parties [in the sense] of buying a collection and selling a collection,” says Stefano Martinetto, chief executive of Tomorrow London. “It’s about delivering experience for the end consumer, so there definitely needs to be attractive consumer experience.”

White Milano opened its doors to consumers in June 2018 with the White Street Market. It allowed certain streetwear and sportswear labels, along with a few niche fashion brands, to talk directly to both retailers and consumers. As White Milano chief executive, Brenda Bellei explained, “B2B remains essential, it is the focus of our business and always our primary concern. But B2C is a real opportunity for the brands.”

The concept of a trade show for the public has even led to entirely new events.

The concept of a trade show for the public has even led to entirely new events. Reference Berlin was a 24-hour fashion festival held in a trendy Berlin neighbourhood in May. It attracted directional fashion labels, such as Martine Rose and Comme des Garçons, as well as more than 2,300 members of the public.

Textile and fibre trade shows further upstream are innovating too. Exhibitors at Blossom Première Vision, which saw both attendee and exhibitor numbers grow at its 7th edition of the show this year, used the opportunity to highlight their latest innovations, particularly in sustainability.

Even with all this innovation, trade shows still face enormous challenges. MICAM, a biannual trade show that attracted 43,000 visitors to Milan in early 2018, tried a range of initiatives to help attendees and buyers better understand the industry, such as a partnership with trend forecasting agency WGSN, and a set of dedicated spaces with experiential features designed to promote co-learning and collaboration. Yet, despite this effort, visitor numbers declined; giving people what they want is not always enough.

“It’s opening a sort of winner-takes-all scenario… There will be a couple of companies left, and those couple of companies will be leveraging an increased number of services,” says Martinetto, underscoring that in the luxury sector the fate of the multi-brand showroom could mirror that of the trade show.

In 2020, we expect to continue to see a shift in the role of trade shows and showrooms. Integrating more sophisticated digital components will be crucial to reach a wider audience and enhance the experience for attendees both during and outside of the show period. More trade shows will consider tailoring and optimising their experience to a targeted audience rather than trying to appeal to everyone, while others will open their doors to end consumers. Those that fail to adapt sufficiently or who misjudge their new ideas may disappear from the calendar altogether. Fashion brand exhibitors need to adapt too. As shows become more targeted, exhibiting brands should become more careful and selective about which ones they join while upgrading their own booths in a much more engaging and digital way.

Trade shows and showrooms remain relevant for B2B relationships in the fashion industry. However, with the entire model of buying at trade shows under increased pressure and retailers picky about which ones they attend, we would expect a continued decline in overall attendance — only the most dynamic, exciting trade shows that add real value to all parties will likely survive in the long term.