TOKYO, Japan — Louis Vuitton menswear maestro Kim Jones calls his friends Verbal and Yoon the most famous couple in Japan, like Beyoncé and Jay-Z, only more so, because they are such all-powerful style icons. “People don’t download music so much in Japan,” he explains. “They’re still really caught up in the whole package, the look as well as the sound. And Verbal and Yoon set trends like no-one else.” Great for designers like Jones, who creates outfits specially for them, but even better for the couple — a hip hop artist and graphic designer, who have turned their hands to fashion and jewellery — as they open their first store in Shibuya, Tokyo this week. Dubbed Ambush® Workshop, the 1,500-square-foot store provides a kind of invaluable work-in-progress platform for Verbal and Yoon’s multi-pronged attack on consumer culture.

Ambush® is the name of the jewellery range that is spearheading their global incursion. They also make clothes to go with the jewellery. “Some brands do accessories to activate the clothes, we do it the other way,” says Yoon. “People understand the story better through clothes than jewellery.” She imagines the new shop will also function as a creative hub for the collaborations and consultancies that have evolved as she and Verbal have become cultural conduits between Tokyo and the West. 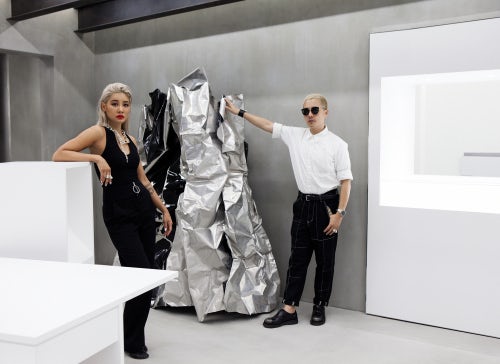 They’ve been married for 10 years, but together for nearly 20, since they met in Boston where Verbal was majoring in business and philosophy and Korean-American army brat Yoon was studying graphic design. After Verbal returned to Japan, he had a career re-think and started m-flo, which turned into Japan’s highly successful response to Daft Punk. When Yoon joined him, she re-shaped his image, away from traditional baggy hip-hoppery towards something more high-fashion — Raf Simons, Dior Homme.

They formed Ambush Design Company in 2002 as a creative outlet for her, and then launched an extravagant made-to-order jewellery line because, says Verbal, “I couldn’t find stuff to buy with my first royalty cheques.” It clicked with the likes of Kanye West and Jay-Z. Nothing like 18 carat gold chains or real stones to catch a rapper’s eye. But stores wanted something smaller, more affordable, so the couple launched Ambush® in 2008.

There’s an amazing animé quality to them. They’re like fashion superheroes.

Initially, Verbal and Yoon toted their wares around from store to store in a trunk, like a real mom-and-pop operation. It’s certainly an image: one of Japan’s most recognisable pop stars and his gorgeous wife showing up on your doorstep with a suitcase full of jewels. That same kind of hands-on humility has coloured their expansion beyond Japan, with their originally via-e-mail-only international business now buoyed by Colette, Barneys New York, Dover Street Market — the usual litany of cutting-edge curators. 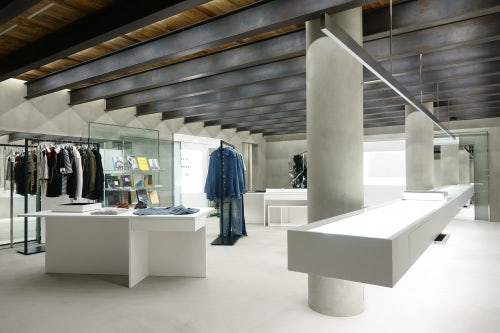 The hands-on approach is winningly coupled with the mesmerised — and mesmerising — eye that Japanese designers have always cast over Western sub-cultures, transfiguring the forgotten, the neglected, the arcane. For instance, Verbal and Yoon love the Beatles, but the particular track they singled out as inspiration for their last Ambush®collection was “Revolution 9,” the most obtuse, Yoko-fied thing the group ever recorded. But it sort of worked as the spaced-out soundtrack in your mind while you thought about the Amerindian feather-and-arrowhead jewellery, the laced, fringed leathers and suedes ideal for “Zabriskie Point”-like make-out sessions in the desert.

Then there’s the latest Ambush® range, sparked by the fusion of punk and reggae in the UK in the late ‘70s. Verbal and Yoon’s research took them back to the arrival of the first immigrants from the Caribbean in 1948. They’re thorough like that. But the integration of cultures is something that fascinates them. “It’s the same idea as sampling,” says Verbal, “Putting things together in a different way.” Yoon adds, “It’s about self-expression, not status. It should be about you. If you like the ring from a Crackerjack box, then that’s your story.”

And not just the ring from the Crackerjack box. The substance of the new Ambush® collection is solid silver and 18 carat plate, but the style is utilitarian: punky found objects like safety pins and plastic zip ties and bits of barbed wire. There are also earrings modelled on tiny black vinyl 45s. And, just as Yoon says, the clothes that go along with the jewellery amplify the story brilliantly. The classic MA-1 jacket, a punk staple, is turned into a cape. The M-65 field jacket comes in bright colours, the camo of an army trench is hand tie-dyed. Everything is surreally oversized. Even if Vetements has already familiarised the eye to that particular development, exaggeration is a Verbal and Yoon signature too. “There’s an amazing animé quality to them,” says Kim Jones. “They’re like fashion superheroes.” In which light, Masamichi Katayama’s interior for Ambush® Workshop is a surprise. It’s significantly minimal, more a flexible gallery space — or maybe a neutral backdrop against which the couple’s story will continue to unfold. In a way, that blank canvas is a promise. The one thing we can expect from Ambush® is constant change.

The Gatekeepers Who Hold the Keys to Japanese Fashion