From Burberry to Gucci to Ralph Lauren, fashion retailers are adding experiential elements like cafés and restaurants to their stores.

LONDON, United Kingdom — In a grand restaurant in central London, customers tuck into classic British delicacies such as afternoon tea topped off with a glass of champagne. Since opening this spring, Thomas’s on Regent Street has become something of a destination. But the space isn’t one of London’s new dining hotspots; this is Burberry’s all-day café at its London flagship, named after the founder of the luxury fashion brand.

Burberry is just one of the retailers enhancing their stores with food and drink experiences. In September, Ralph Lauren opened Ralph’s Coffee on the second floor of its Polo flagship on Fifth Avenue in New York, while the previous year, further downtown, Club Monaco unveiled a coffee shop, Toby’s Estate Coffee, in its rebranded flagship. Just last month, Gucci launched a bistro, Gucci Café, in its store in Shanghai’s IAPM shopping centre. Meanwhile, over in the Ginza district of Tokyo, customers can eat and drink at Bulgari, Chanel and Dunhill, to name a few. 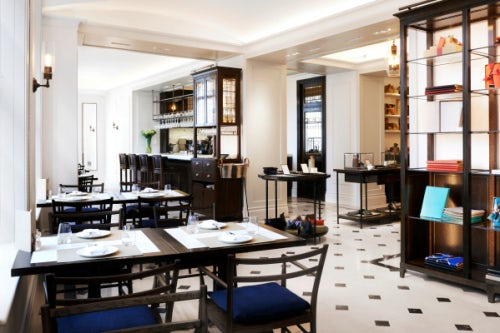 So why are the retailers that dress us starting to feed us and top up our drinks as well?

When British menswear retailer Hackett London revamped its Regent Street flagship in October 2013, the new design included a gentlemen’s club-style gin bar. Managing director Vicente Castellano says the business wanted to “build a full luxury shopping experience for the Hackett customer” — and boost dwell time. “It is widely known that men do not necessarily spend a great deal of time in stores when shopping, so we felt that free gin and tonics were a great incentive to increase browsing time and ultimately increase sales,” says Castellano. Whether the strategy has worked is hard to assess. Hackett says it’s hard to tease out exactly how the bar has impacted footfall because it was introduced as part of an entire store revamp, but the retailer has since installed an oak-finished cash desk, which doubles up as a bar with a sink and ice machine, at its new concept store in Amsterdam.

“For us, it’s really about driving more footfall and more regular visitors to the store,” says George Graham, co-founder of multibrand designer boutique Wolf & Badger, which opened up the basement beneath its Dover Street location last year to healthy food brand Raw Press. Customers can enter via the store or through a separate entrance. Wolf & Badger has also added a Raw Press juice fridge to its Notting Hill boutique. “Some of our customers now regularly buy juice and others have started buying from Wolf & Badger. They may not have been in before and, by coming for a juice, they find out what we’re all about and become regular customers.”

Since the move, Graham says footfall has increased by between 20 percent to 30 percent across both locations, and, while he says it is difficult to identify how much sales have increased on the back of the juice bar, he believes there has been a positive impact.

This increase in dwell time has also been observed by Dover Street Market (DSM), which features a Rose Bakery café in its London, New York and Tokyo branches. “The bakeries enhance the overall experience and allow our customers to hang out and spend time with us,” says James Gilchrist, general manager of DSM New York. “For example, some of our customers come for the entire day to shop, have lunch, shop some more, then relax with an afternoon drink.”

Across the globe, there are a total of 13 Armani restaurants and cafés, including one located inside its Munich store, as well as a Nobu restaurant housed in its Milan branch. “I believe that cafés and restaurants are a destination after a day’s shopping; a space where you can enjoy a smart and relaxed atmosphere,” says Giorgio Armani. “I’ve always wanted to create a complete Armani lifestyle that reflects my ideas and can be applied to different areas, not just fashion. Restaurants and cafés seemed a logical expansion.”

Lorna Hall, head of market intelligence at trend forecasting agency WGSN, says the key motivation behind retailers opening up their space to restaurants, cafés and bars, is to create excitement and give customers another reason to visit, at a time when customers are increasingly shopping online. “Retailers need to create something other than product,” says Hall. “Product is not enough; they have to create a destination and keep customers with them. They need to increase dwell time and give them a reason to come.”

“The turnover generated from restaurants and cafés will be so minimal, but it’s about building customer loyalty and getting them in store and giving them an opportunity to buy,” adds Honor Westnedge, lead retail ‎analyst at intelligence firm Verdict Research. “I’d expect there to be a small uplift in sales, just like click-and-collect does. That captive audience may well be tempted to purchase.” 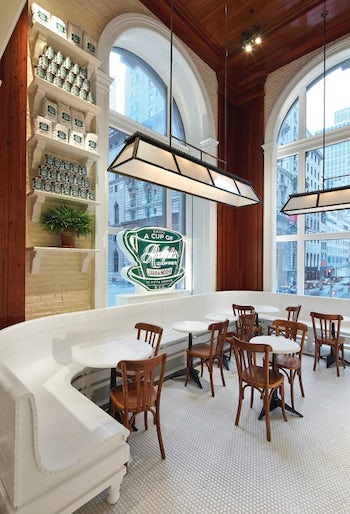 Joe Pine, co-author of The Experience Economy and co-founder of Strategic Horizons, believes that consumers are seeking a more engaging and memorable shopping experience — and if retailers can captivate them with experiential elements like restaurants and cafés, and thereby increase dwell time, it will inevitably boost sales. “If you, as a retailer, can get your customers to spend more time with you, then, naturally, they will spend more money as well.”

But why are retailers enhancing their in-store experience with food? First off, the market they’re entering is pretty buoyant. In the US, the dining out sector continues to report strong growth, with sales estimated to have reached $482 billion in 2014, up from $395 billion in 2009, according to Mintel.

In China, over 85 percent of consumers eat out at least once a week, according to a survey by Unilever Food Solutions. And, thanks to rising incomes, Chinese consumers are trading up to spend more on premium dining options, leading to expenditure on food service increasing 8.1 percent to RMB 799 billion ($129 billion) in 2014, reported Mintel.

Those retailers tapping into the explosive coffee market are also savvy: in the US, specialist coffee shops reported $19.1 billion in sales in 2014, up from $16.6 billion in 2009, according to Euromonitor. Quite simply, food and drink is a footfall driver.

“Food has become so important over the past 15 years,” says Gilchrist. “More and more of us are extremely interested in food, cooking and what and where we eat.”

“Food is in fashion,” says Hall. “And while you don’t need to go out to buy a product because you can do that online, you can’t meet a friend in the same way; that’s why food is becoming a glue for retail.”