LONDON, United Kingdom —  Louis Vuitton is the latest luxury brand to jump on the wearable tech bandwagon with the launch of its first smartwatch: the Tambour Horizon, a drum-shaped device that’s part of Vuitton’s Tambour collection and runs on Google’s Android operating system. The watch is available in three different case styles which can be customised with 60 interchangeable strap options and a range of downloadable digital watch faces.

“We don’t know where the industry of connected objects is going, but we know it’s going to be massive,” Louis Vuitton chairman and chief executive Michael Burke told BoF. “You can either sit on the sidelines and observe, or you can dive in and be an actor.”

We don’t know where the industry of connected objects is going, but we know it’s going to be massive.

Indeed, the global market for smartwatches could reach $32.9 billion by 2020, registering a CAGR of 67.6 percent from 2014 to 2020, according to Allied Market Research. But Louis Vuitton is late to the smartwatch game. The arrival of the Tambour Horizon comes more than two years after Apple launched its device in April 2015. Several luxury brands, including fellow LVMH brand Tag Heuer, Bulgari and Montblanc have since launched smartwatches of their own, yet Apple remains the world’s dominant smartwatch player by a large margin. 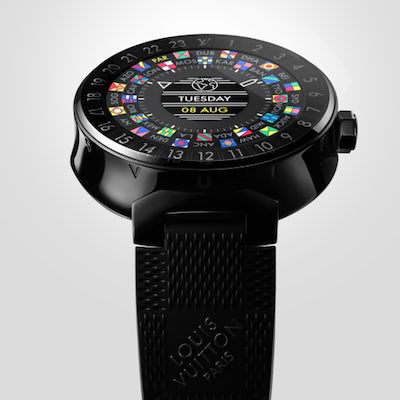 The Horizon will become Louis Vuitton’s entry-level timepiece, with prices starting at £1,950 ($2,511) for the case and £235 ($303) for a strap. Leaning on its travel heritage, Vuitton is targeting a customer that’s highly mobile. Its smartwatch comes with the label’s famous city guides and a downloadable “My Flight” app. It also offers a seamless experience across both Chinese and Western apps.

“It’s the first time ever that a connected watch will be launched worldwide and will function in China and in the rest of the world,” explained Burke. “Right now, when [the] Chinese travel, they have to travel with two watches: one for China and one for the rest of the world. If a Chinese citizen buys the Horizon watch in Paris, when they land in Shanghai and they reboot the watch, it boots automatically on the Chinese operating system.”

But many have noted the disconnect between the fast-moving, wearable tech space and makers of luxury watches, which are often marketed as timeless heirlooms or investments. “The challenge that you have is to keep the pace and be relevant from a technological point of view,” said Mario Ortelli, an analyst at Sanford C. Bernstein. “Luxury companies risk coming out with a smart watch that is old from a technological point of view even before the launch.”

The challenge that you have is to keep the pace and be relevant from a technological point of view.

For Vuitton, its smartwatch may ultimately prove to be more about buzz than sales. “Some people will undoubtedly enter the store to look at the product,” predicted Ortelli. “The buzz around the product will create traffic both online and on the shopfloor, but it is unlikely to be a significant revenue generator.”

“I don't expect a smart Louis Vuitton watch may move the needle for them,” agreed Luca Solca, head of luxury goods at Exane BNP Paribas. “Yet, this may help to make them à la page and in line with the spirit of the moment. It should carry some communication value, I guess.”

Montblanc Launched a Smartwatch. Here's Why It Matters