The modern dandy specialises in fitted, shrunken suiting and has designed for Brooks Brothers Black Fleece and Moncler Gamme Bleu.

Thom Browne ’s stunted male silhouette and his otherworldly creations for women have placed him at the vanguard of New York’s fashion scene. His aesthetic and theatrical presentations has garnered Browne worldwide recognition and has led to extremely successful collaborations with Brooks Brothers and Moncler Gamme Bleu.

Having obtained a business degree at Notre Dame, Browne tried his hand at acting in LA. While auditioning and working in commercials Browne discovered a passion for altering vintage men’s tailoring with Johnson Hartig, now the co-designer of Libertine. Once resigned to the fact that acting was not the right path, Browne sold his car and moved to New York in 1997, taking up a job as a Giorgio Armani salesman. He was then taken on by Club Monaco, then owned by Polo Ralph Lauren . Lauren saw Browne’s potential and hired the designer to be a part of Club Monaco’s design and merchandising team.

In 2001 Browne started his own label, believing the ubiquity of casual dressing had created a gap in the market. Browne told New York Magazine, “I feel like jeans and a T-shirt have become Establishment. Everyone’s dressed down. So actually putting on a jacket is the anti-Establishment stance.”

Unable to fund a full collection, Browne made five suits for himself, wearing them around town in a form of guerilla advertising and imploring friends and contacts to buy from him. “Thom’s suit is the new expression of the suit,” Tommy Fazio, men’s fashion director at Bergdorf Goodman told New York Magazine at the time. “He’s really influencing everyone. I see his shape echoed throughout the market. But no one does it like Thom. And in the store it’s gotten to the point where guys just come in and say, ‘Where’s the Thom Browne?’ You hear it as much as ‘Where’s the ladies’ room?’ these days.”

In 2003 he opened his made-to-measure store in New York, quickly followed by a presentation at New York Fashion Week in 2004. In 2007 he began his collaboration with Brooks Brothers and the following year was named designer of the year by GQ. In 2013 the CFDA awarded Browne its Menswear Designer of the year Award.

Browne made an audacious move in 2011, launching a womenswear collection at New York Fashion Week. His womenswear aesthetic is as equally novel as that of his menswear, however for all of his collection’s avant-garde sensibilities Michelle Obama called upon the designer to custom make a coat dress for her husband’s second inauguration.

In August 2018, Ermenegildo Zegna acquired an 85 percent stake in the company, valuing the business at approximately $500 million. 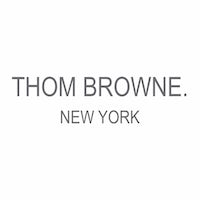 Thom Browne Wants to Be an Artist