The Year Ahead: Rethinking Retail ROI

Amplified by a potential power shift from landlords to retailers and the need to seamlessly embed digital, companies will need to make tough choices to improve their return on investments.

The Year Ahead: Rethinking Retail ROI

Amplified by a potential power shift from landlords to retailers and the need to seamlessly embed digital, companies will need to make tough choices to improve their return on investments.

For those who dismissed the “retail apocalypse” as an exaggeration, 2020 will be remembered as the year that gave them food for thought. In the US alone, some 20,000 to 25,000 stores are likely to shut this year, which is more than double the number in 2019. Even retailers that actively addressed the retail disruptions of recent years have been forced to reduce their store network significantly. Macy’s, Zara, J.C. Penney, John Lewis, Onuma and Isetan Mitsukoshi are among those to have announced closures around the world. One exception to the rule is China, where, according to McKinsey Fashion Scenarios (based on information available September 2020), the offline market is expected to grow by up to 5 percent in 2021 versus 2019, in the Earlier Recovery scenario. However, Europe is likely to see an 8 to 13 percent decline in offline sales and the US will likely see a drop of 22 to 27 percent compared to 2019 levels.

The pandemic is, of course, the predominant recent source of stress for physical retail, but there are also significant long-term challenges, including sometimes punitive operating costs. Rent alone can often account for 25 to 40 percent of operational expenses in the physical space. In times of crisis, these fixed costs quickly become disproportionate to revenues, leaving retailers with limited options to reduce the cost base in the short term.

Many retailers have embarked on strategic reviews of their store networks and launched initiatives to improve the productivity of remaining stores, leveraging digitisation, automation and more flexible working practices. With respect to the latter, they are both cutting staff costs to align with lower turnover and training staff across diverse skill sets. These kinds of decisions are often accompanied by budget and capital reallocations across channels to better reflect revenue potential. Digital is often the beneficiary.

Rent alone can often account for 25 to 40 percent of operational expenses in the physical space.

According to the BoF-McKinsey State of Fashion 2021 Survey, 37 percent of fashion executives expect to close more than 10 percent of their stores by the end of 2021, compared with pre-Covid plans. Zara’s owner Inditex has announced it will close up to 1,200 stores over two years and invest €2.7 billion (approximately $3.2 billion) in digital transformation and online-offline integration. Nike has promised to accelerate its digital strategy and invest in high-potential areas, which it said would lead to job cuts in stores and new jobs in digital. Similarly, some executives in Asia-Pacific markets are focusing on increasing online sales capacity rather than investing more in physical retail (see Exhibit 12).

The role of in-store employees is evolving, as companies retrain or redeploy people to add a human touch to digital experiences — and vice versa. For years, futurists have predicted these so-called “bionic” retail services across a variety of sectors. Now the conditions are right for the idea to become a reality. The ultimate goal is to deliver a stimulating and rewarding shopping experience that caters to individual needs across channels. We expect these kinds of hybrid roles to increase exponentially, with in-store employees requiring high levels of skill to help deliver an omnichannel offering. Activewear brand Fabletics is among the companies that are responding, experimenting with “omni-associates” who both guide clients in-store and interact through online channels.

“The lesson… for all brands is that we don’t build our lives around retail. Retail builds itself around our lives,” wrote retail industry futurist Doug Stephens in a column on The Business of Fashion.

With store closures expected to accelerate in 2021, there is a growing sense that landlords have more to lose than tenants, leading to the potential for a relative power shift in the relationship. 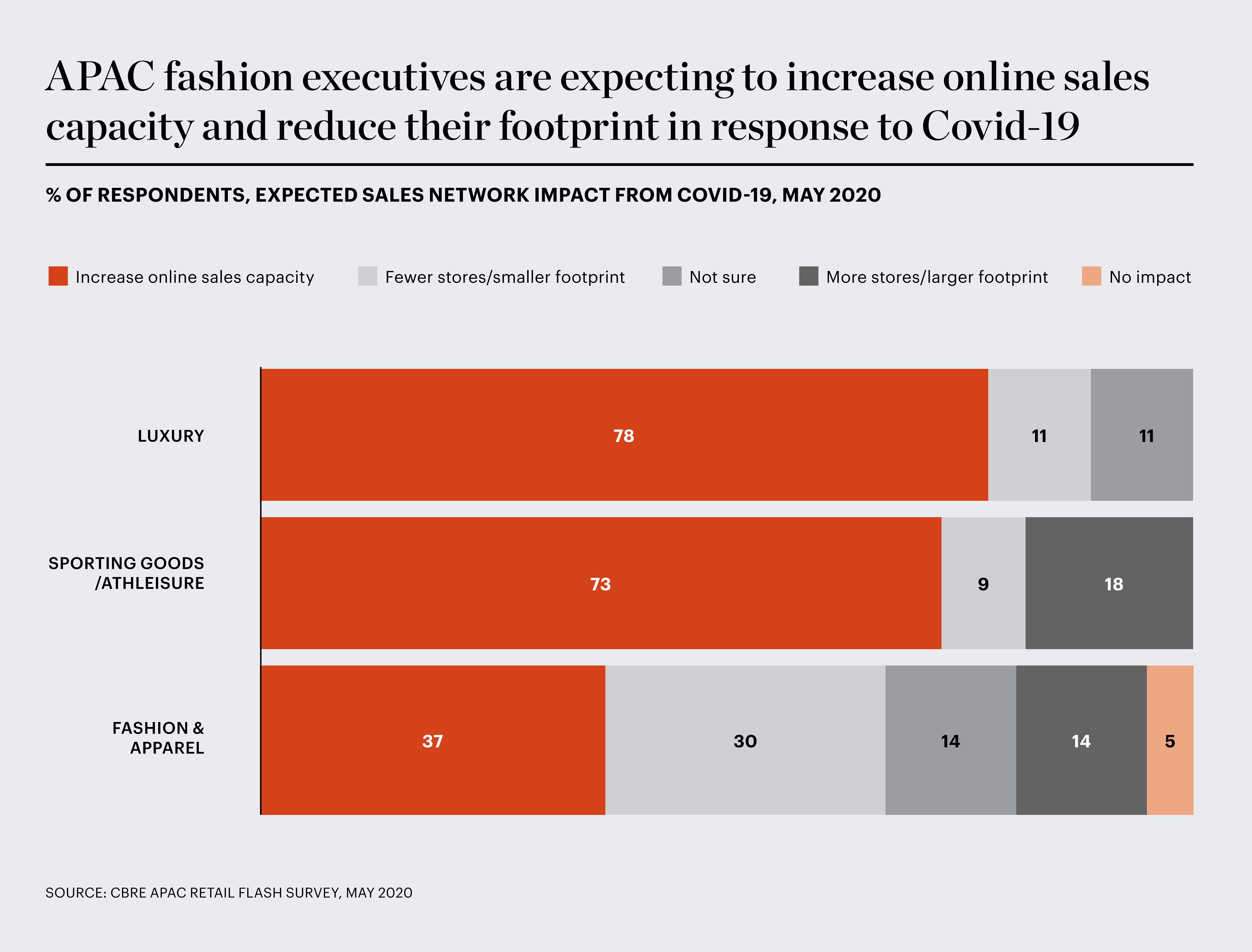 As a result, while some real estate firms are taking retailers to court, others are considering a possible transformation of lease models. New Look and All Saints are among tenants to have requested turnover-based rents for their stores, while some landlords are experimenting with rent models indexed to store performance, alternatives to upward-only rent reviews and lease renewals with shorter terms.

To gauge the ROI of their retail networks, some brands are using new key performance indicators that measure the stores’ contribution to omnichannel profitability. Through this lens, the ROI of a flagship store is often considerably higher than it would appear to be. Alongside this trend, a number of companies have invested in hybrid flagship spaces, tapping demand for digitisation, localisation and personalisation. Burberry, Nike and digitally native Arias have recently invested in hybrid flagship spaces. Nike’s latest House of Innovation store opened in Paris in July. The format deploys technologies such as apps and body scans to create a richer shopping experience and leverages data analytics to predict footfall and sales patterns. Burberry’s boutique in Shenzhen, China, offers a customised WeChat programme in partnership with Tencent, which delivers to customers exclusive content, rewards and personalised experiences.

“[Currently, luxury] e-commerce is used as a complement to flagship stores, not a substitute. In the future [however], this trend will be reversed and physical stores will be a complementary experience to e-commerce,” said Li Rixue, chairman and chief executive of Chinese luxury e-commerce company Secoo.

New store formats will continue to emerge in 2021, offering a range of omnichannel services, such as BOPIS (buy online pick up in store) adapted for in-store returns, in-store ordering and customisation. Among recent examples of innovative initiatives, French footwear brand Veja has opened a “services” concept store in Bordeaux that features a shoe-repair corner, and Brazilian luxury mall group JHSF Participações allows customers to remotely chat and browse with in-store personal shoppers via WhatsApp and receive their purchases at home. “We are increasingly reinforcing the idea that the shopping centre can also go to the customer, wherever they are,” said Thiago Alonso de Oliveira, JHSF Participações’ chief executive.

Another way to improve store ROI is to convert strategically located but underperforming (or closed) stores into digital fulfilment centres, following examples from other retail segments. In April, Bed, Bath and Beyond in the US said it was converting a quarter of its locations into dark stores. At the height of the pandemic, players experimented with repurposing closed stores as warehouses. US department store Nordstrom, for instance, rapidly increased the share of online orders handled by its full-price stores and its off-price Nordstrom Rack stores, which were both closed to the public at the time, in order to reduce inventory levels.

For some players, these temporary strategies could become permanent as online order volumes continue to grow. At the same time, as retail localisation trends evolve, we are likely to see increasing numbers of small stores, enhanced with hand-picked inventories, and neighbourhood stores designed to forge local connections, as seen with Macy’s and Harrods’ experiments with smaller, out-of-town formats. The relative importance of these new formats compared to large downtown stores will be a factor of how long the health crisis continues to restrict movement and of how long consumer preferences for local retail endures after that.

In addition to the repurposing of entire stores, brands will trial new uses for parts of their retail floorspace, moving beyond co-retailing to alternative models such as space sharing. French sports retailer Decathlon, for example, has opened boutiques in stores of grocery chain Franprix. The move reflects the growth of retail-as-a-service models, in which businesses lease out space to generate revenue and boost footfall. In the US, Neighborhood Goods and Showfield are prime examples.

Some brands and retailers are capitalising on demand for independent workspaces, creating blurred boundaries between work and leisure by opening up retail floorspace to remote working. Selfridges and Westfield London are among those to have announced plans.

The lesson for all brands is that we don’t build our lives around retail. Retail builds itself around our lives.

As companies aim to boost store ROI in 2021, many will focus their store footprint on high-growth markets. Brands including Montblanc, Hublot and MSGM are targeting Asia for new store openings, reflecting the region’s economic growth potential and the fact that China is ahead of the global recovery curve (see Mapping the Retail Portfolio of the Future on page 89). Still, a precondition of success in the region is likely to be the ability to offer a mature digital–physical hybrid, reflecting Chinese consumers’ high levels of digital engagement. Uniqlo is among the brands with major plans, having reaffirmed in March 2020 its pre-pandemic announcement that it would open 80 to 100 new stores in the market next year.

In 2021, fashion leaders must finally resolve long-standing structural issues, closing unproductive stores and renegotiating rent terms across their portfolios. The challenging real estate landscape will create opportunities to engage landlords in conversations about ways to improve productivity, both overall and at individual sites. At the same time, executives should evaluate their presence in fast-growing regions such as China to optimise retail strategies to capture market growth.

While spearheading the many changes to the store footprint and function, fashion executives will also need to develop new models to measure store ROI. Fundamental to these will be their alignment with emerging ideas about store economics and use of data to make every square metre generate as much value for the omnichannel model as possible.