The Year Ahead: Keep Your Suppliers Close

To mitigate future ruptures, fashion players must move away from transactional relationships with suppliers in favour of deeper partnerships that bring greater agility and accountability.

The Year Ahead: Keep Your Suppliers Close

To mitigate future ruptures, fashion players must move away from transactional relationships with suppliers in favour of deeper partnerships that bring greater agility and accountability.

For years, there have been calls for closer partnerships between brands and suppliers. However, progress has been frustratingly slow, evidenced by the fact that before Covid-19 the prevailing relationship between fashion companies and suppliers was transactional in nature and short-term in scope. Now, change is finally afoot.

As underlying tensions in the supplier relationships painfully rose to the surface during the pandemic, brands were jolted into the realisation that their supply chains need to be more resilient. A growing number of executives recognised that nurturing closer relationships is one way to do this while helping to meet their sustainability obligations and support the fashion industry’s transformation to a more flexible demand- focused supply chain. In a McKinsey survey, some 73 percent of the sourcing community expected the trend towards deeper partnerships to accelerate over the coming year.

“Brands must break down and break through the adversarial bargaining that is focused on the price of finished goods out of the factory,” John Thorbeck, chairman of supply chain analytics firm Chainge Capital told The Business of Fashion in September 2020. “You need to collaborate and cooperate on the components of finished goods in order to create flexibility, which in turn creates value that can be shared among the partners.”

Brands must break down and break through the adversarial bargaining that is focused on the price of finished goods out of the factory.

Amid store closures, plunging fashion sales and bankruptcies, 2020 was the year in which the fragile nature of buyer and supplier relationships was laid bare. It all began in the first few months of the year, as lockdowns in China, the world’s largest producer of apparel and raw materials, caused deliveries to be delayed. This sent ripples across the globe. As a result, brands focused on China-based manufacturing scrambled to accelerate diversification strategies and then still faced capacity issues due to the dependence of many Asian sourcing markets on raw materials and textile inputs from China. As the pandemic spread around the globe, temporary lockdowns followed in other regions. Supply chains became stretched, leading larger-scale suppliers and sourcing agents with multi-country footprints to gain an advantage.

Going forward, we expect fashion brands will seek to more permanently diversify their geographic sourcing footprint, as well as support priority suppliers with longer-term volume commitments and work more closely with them to align on strategy.

Later in the year, cancellations, delayed or reduced payments and contract renegotiations put a spotlight on the continuing power imbalance in the value chain. Sanjeev Bahl, founder of Vietnam-based denim manufacturer Saitex, characterised the period as a “bloodbath.” “The buying community is taking the supply chain for granted and creating long-term collateral damage,” he said. “It’s very reckless behaviour.”

In a McKinsey survey from April 2020, around three quarters of sourcing executives reported cancelling orders during the first wave of the pandemic, while just one in five paid for more than 75 percent of orders as agreed, and 41 percent renegotiated supplier contract terms. Not surprisingly, nearly half of sourcing executives expected many of their suppliers to face financial distress this year. 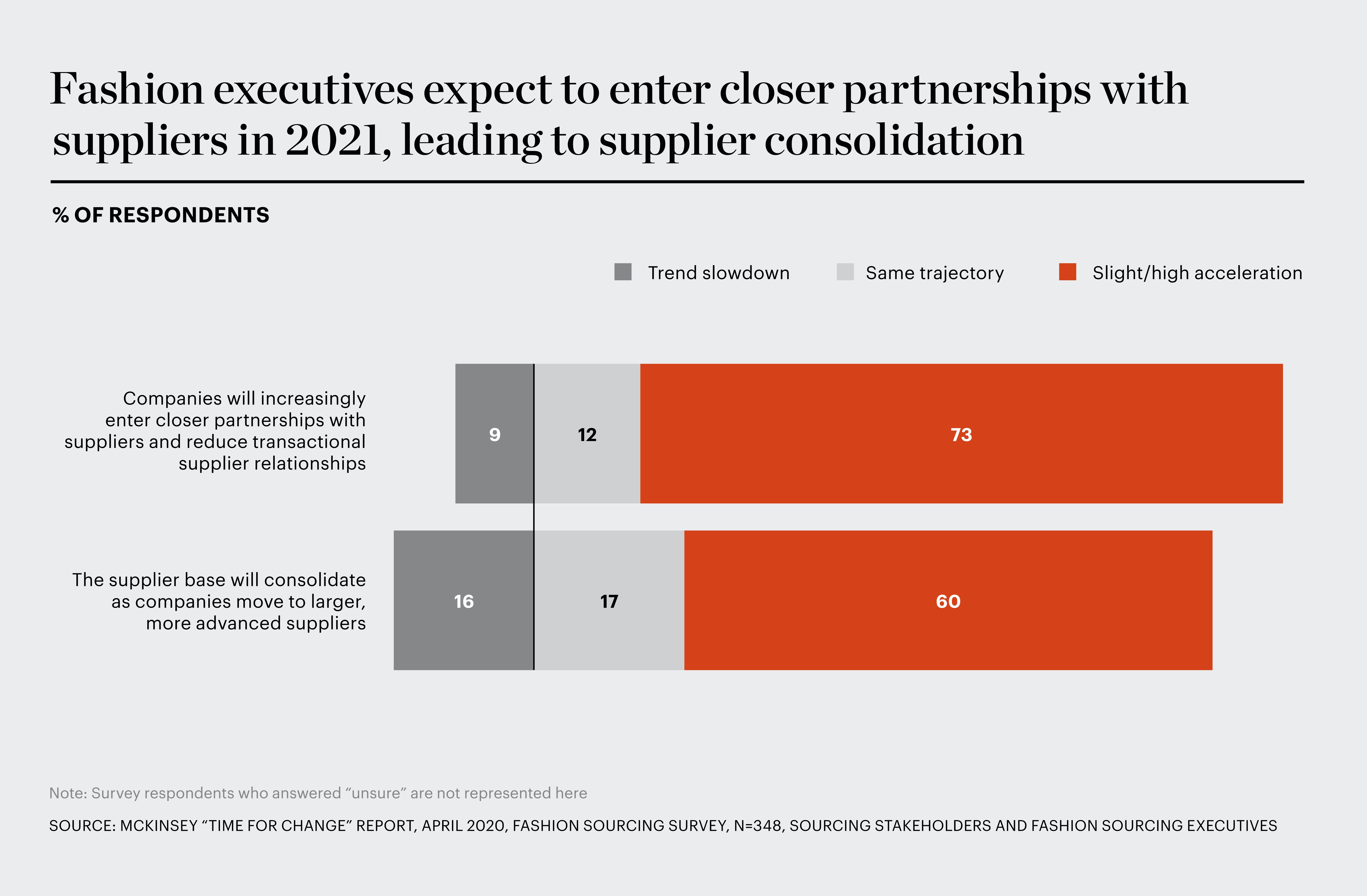 Examples of supply chain pressure have proliferated around the world. Italy’s artisanal luxury suppliers saw orders drop by around 40 percent early in 2020, with many avoiding furloughs only by switching to production of personal protective equipment. In Honduras and El Salvador in Central America, apparel exports to the US tumbled by over 90 percent year-on-year in April, and in Mexico they fell by more than 65 percent. By March, western fashion brands had reportedly cancelled $2.8 billion of orders from Bangladeshi suppliers, impacting the livelihoods of 1.2 million workers. Reports in August suggested some 9 percent of Bangladeshi garment factories had closed permanently because of the pandemic, and nearly a third of the remainder doubted whether they would be able to resume normal operations. Still, despite many factories shutting permanently, just 17 percent of fashion companies said they will co-invest in suppliers to secure future capacity.

Many brands initially reacted slowly to the impact on suppliers and workers of cancellations and payment delays, with many claiming contracts were invalidated by force majeure. The industry response became more nuanced as the year progressed.

However, as more factories closed and public pressure mounted (supported by campaigning organisation blacklists) more brands during the northern hemisphere summer said they would indeed honour their contracts. As time progressed fashion sourcing executives put more focus on coming out of the crisis together and on strengthening the resilience of their supply chain.

“We have to [help build better] social protection systems… in countries where there’s a lot of production,” said Helena Helmersson, chief executive of the H&M Group, referring to the need for “more collective, industry-wide agreements between employers, workers, unions and governments, as there are in some parts of the world. [Though] you might argue that it takes a longer time, what you’re building is a system change that will [last].”

Though the power imbalance in the fashion supply chain is unlikely to be resolved any time soon, the voice of suppliers is getting louder, reaching consumers globally. Many suppliers are demanding a relationship based on mutual respect, fairer treatment, a reasonable share of value and better adherence to contracts. Suppliers in all industry segments are speaking up, from mass-market suppliers in Bangladesh to Indian artisans working for the international luxury houses. Some are threatening embargoes when brands do not pay their bills, applying rating systems and leveraging tools such as HSBC’s Serai to conduct financial health checks on brands. Looking forward, we expect to see more suppliers — especially the stronger ones — put their buyers’ financials, payment histories and purchasing behaviours under intense scrutiny. However, most suppliers concede that brands and retailers continue to have the upper hand.

By March, western fashion brands had reportedly cancelled $2.8 billion of orders from Bangladeshi suppliers, impacting the livelihoods of 1.2 million workers.

Nevertheless, a growing number of suppliers are taking measures to compel brands to honour contracts as well as questioning payment terms and the financial risks suppliers are asked to take. Some brands are responding. H&M, for example, has joined other players who isolate their labour costs and ringfence them in price negotiations in order to protect worker wages. Meanwhile, governments are moving in that direction too, as more lawmakers around the globe look to move fashion companies away from voluntary initiatives toward taking legal responsibility for their supply chains.

As brands reinvent their supply chain relationships, they are also likely to take the opportunity to make positive moves on sustainability and human rights. Under the Paris Agreement on climate change, countries around the world are committed to trying to limit the planet’s warming pathway to 1.5°C. Analysis by the Global Fashion Agenda and McKinsey shows that fashion can only play its role with a reduction in excess stock by infusing flexibility in the supply chain in close collaboration with workers. They are also increasingly partnering with suppliers across tiers, as the production and raw material stages are often the biggest emissions-savings levers.

This year is seeing hyper-acceleration on several fronts: from sales volatility and overstock to online market share and sustainability demands by both consumers and investors. As such, there is rising pressure on fashion companies to speed up the transformation of purchasing practices and sourcing relationships. Brands need to cater to a less predictable, multi-channel environment, enabling them to source smaller batches and react faster to in-season trends. Strategic suppliers with longer-term relationships will also take on more responsibilities — including co-design and quality control — to speed up the product development process.

Some 76 percent of sourcing executives in a McKinsey survey said that the need for flexibility and speed will accelerate further in the coming year, as brands place greater emphasis on full-price sell-through and sell-out margins. Deeper partnerships are likely to be a precondition of successful execution, in which suppliers have more transparency on brands’ strategies, sales data and forecasts, and in which binding commitments are made to secure open-to-buy capacity.

In addition, strategic partnerships or co-investments can help suppliers invest in new machinery, semi-automation, technology and R&D. These will help companies increase productivity and optimise inventory management in a more volatile market, as well as reduce their environmental impact. We also see more players moving from broad-based sustainability visions to concrete targets and timelines to operationalise their strategies.

In summary, we expect fashion brands to reduce transactional or non-committal relationships in favour of medium- to longer-term volume commitments and strategic alignment with suppliers. Empowered suppliers will likely help brands boost margins and improve consumer perceptions of the industry through increased efficiency and improved sustainability. Rather than focusing on order management, traditional negotiations and compliance, the sourcing function will play a key role in sustaining relationships and communicating with preferred partners. For digitised, agile product development, brands will also need to forge closer relationships between their design and merchandising functions and suppliers. At the margins, we will see investment in the upstream value chain. This will drive sustainability and support implementation of new technologies to boost productivity and enable on-demand manufacturing.