TOKYO, Japan — Thanks to its notoriously bin-free streets, high-tech toilets and Marie Kondo-branded minimalism, Japan has a reputation for cleanliness.

“Everyone is obsessed with being clean... a lot of people carry around wet tissues and sweat-wipes,” says Tokyo-based media student Yoko Hashimoto. “I think females are expected to look tidy and smell nice at all times, which is a bit unrealistic, in my opinion.”

There are exceptions to Japan’s obsession for hygiene. The country is home to a thriving second-hand retail scene — its domestic market for digital resale was valued at 483.5 billion yen ($4.59 billion) in 2017, a 58 percent year-on-year spurt according to the Ministry of Economy, Trade and Industry — but resold clothes and accessories can withstand a thorough clean. Makeup, however, is a different story.

Japan’s domestic beauty market is one of the world’s most sophisticated, boasting a fruitful ecosystem of cult local drugstore and high-end brands such as Shiseido and SK-II accompanied by thriving demand for global luxury names. As a result of the emphasis on premium and potent ingredients and vigorous commitment to innovation and R&D, Euromonitor International estimates that the country’s shoppers spend the most on cosmetics and skincare per capita. 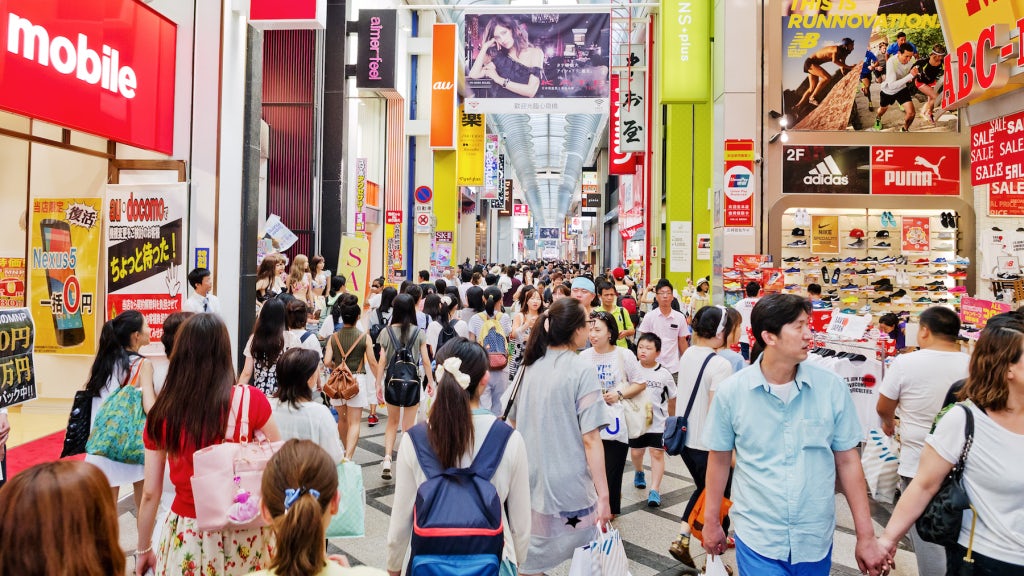 And yet, puzzling as it may sound, buying used makeup is becoming popular among a small but growing segment of Japan’s Millennials. The phenomenon speaks volumes about the demographic's consumer psyche, which is simultaneously brand-loving and increasingly frugal.

Mottainai, often translated as “what a waste,” goes some way in capturing this frugal aspect of Japanese culture. It is a deeply rooted value that often goes undetected by casual observers who tend to focus on the big-spending surface of Japanese shopping habits.

The sentiment informs and manifests in myriad aspects of Japanese life, from children being warned not to leave a grain of rice in their bowls to utilising fabric scraps to craft patchwork and woven textiles such as traditional-stye nanbu saki-ori. The pride and comfort that many Japanese feel towards buying, using and owning less — but spending on quality and luxury items where it counts — attests to the country’s sophisticated and thoughtful consumption culture.

Marika Sakamoto is a 28-year-old Tokyo dweller who has purchased used RMS Beauty and Nu Skin products on Mercari, Japan’s top peer-to-peer marketplace platform. “When I buy secondhand cosmetics, I always carefully look thorough about how many times has [it] been used and expiration dates,” she says.

“Mercari helps [make] buying these products easier, because you can't buy them in Japan and people really don't mind if they're used.” The fact that buying secondhand products is more environmentally friendly is a bonus.

The used beauty trend isn’t unique to Japan. On West Coast-based Glambot in the US, shoppers can find Giorgio Armani’s Chinese New Year highlighter palette with “80 percent fill” remaining for $44.50 instead of the original $89. Peer-to-peer shopping app Depop, Lithuanian Vinted and Reddit also provide platforms and forums for users to buy used cosmetics. In China, shoppers can pay $4 for 15 minutes in shareable makeup booths found in malls across the country.

You can't buy these products in Japan and people really don't mind if they're used.

Even with the habitual ‘swatching’ and testing of shades and formulas in the most high-end department stores, sharing makeup is extremely unhygienic — in April, American beauty giant Sephora settled a lawsuit with a customer who claimed she contracted oral herpes after sampling a lipstick at its Hollywood outpost for an undisclosed sum. But Japan’s hand in the makeup resale trend is uniquely at odds with its spotless image.

However, as Japan’s sharing economy matures, a small number of millennials seem willing to overlook germs for luxury-priced beauty at a steep discount. A search for used makeup on Mercari returns products from Chanel’s natural finish loose powder to face brushes from local beauty brand Addiction, used beyond the point of being merely tested or "swatched." An FAQ page states that Mercari allows used makeup to be sold, provided that the products are well-described and not expired.

“I was so surprised that most of [my listings] were sold within a few days,” says Tokyo-based Moe Miura, who has sold her opened and used Chanel, YSL Beauty and Clinique products on Mercari. As her generation experiment with new brands discovered through Instagram and Youtube, she reckons that secondhand beauty will gain speed.

“I thought it was very weird for people to use used makeup products,” says Miura, who despite selling her own makeup would not buy used cosmetics for sanitary reasons. “[But] recently, Japan has a trend of sharing and I feel like people's consciousness towards [extreme] cleanliness has been changing.” 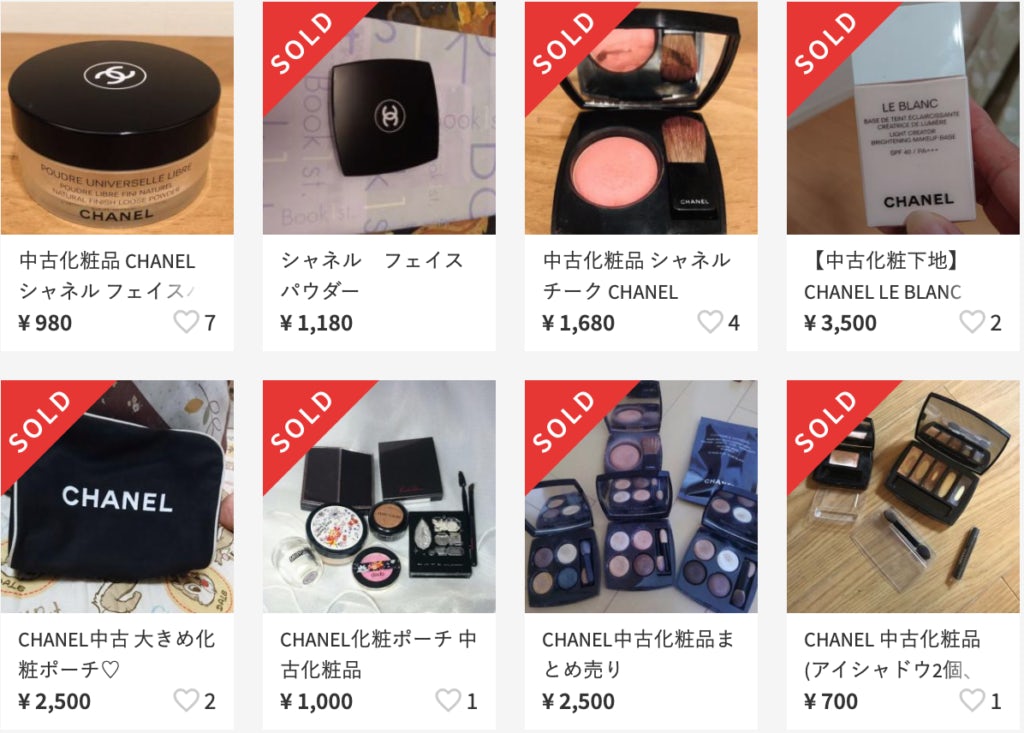 Mercari has become the ideal place to access luxury cosmetics, allowing younger Japanese customers to try shades and formulas without committing to full price, or nab beauty brands that aren’t available directly in the country. Mercari did not respond to BoF’s request for comment.

“When you want to try a new Chanel lipstick, you can try it via Mercari at a lower price and then buy a new one if you actually like it,” says Yo Douglas, Gartner’s senior specialist for research and advisory in the APAC region. “It’s not unlike buying used cosmetics from your friends.”

According to Douglas, the trend has taken hold — despite Japan’s sensitivity to hygiene — due to a mutual understanding, and high level of trust and consideration between buyers and sellers. “Sellers know about the consumers sentiment,” she says, noting that users are encouraged to communicate and sellers will even voluntarily replace used powder puffs when sending foundation compacts to their new owners.

As luxury beauty products seldom go on sale, second-hand beauty plays into local younger shoppers’ desires for branded goods, with specific product categories being stronger status symbols than others. According to Bain & Company overall luxury sales rose 6% in 2018 to €22 billion ($24 billion), though inbound tourism is one significant driver. 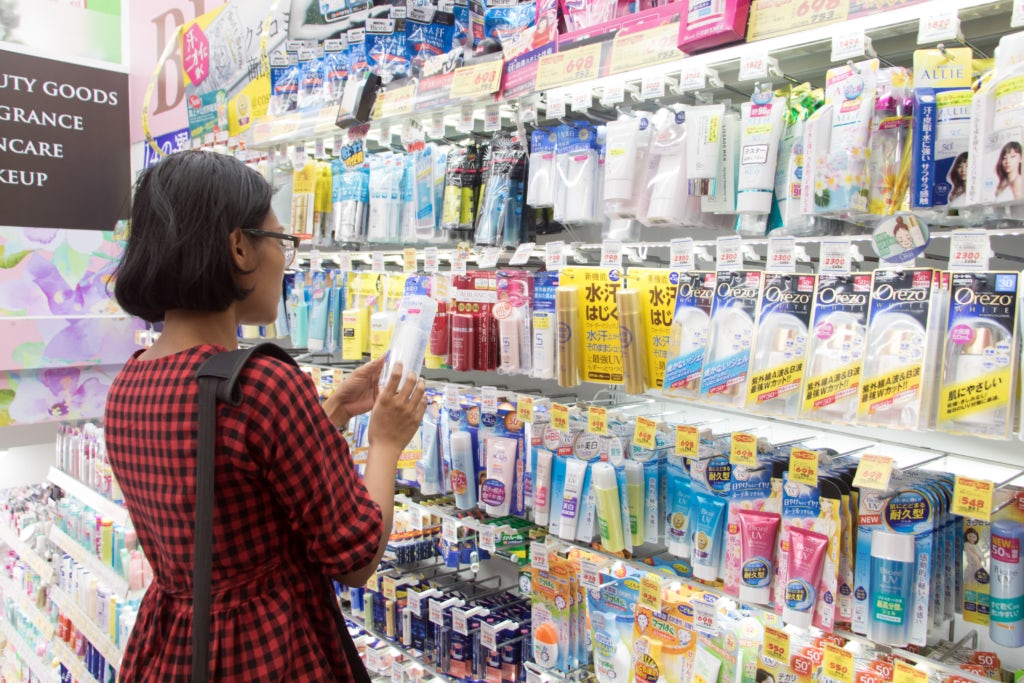 A young woman chooses cosmetics at a store in Osaka | Source: Shutterstock

“Younger people like to carry around branded lip products [and] setting powder,” says Hashimoto. “But they like to use minimalist products at home, [such as] skincare, base, sunscreen so that they can feel like they are taking care of themselves while being frugal and saving money.” According to Hashimoto, buying used makeup is especially popular with those looking to use the product as a prop for social media posts.

Though the 22-year-old hasn’t bought used makeup for herself, she has sold used products on the platform on multiple occasions, including a cushion foundation she received that was a touch too dark. “It was purchased within a few hours after I posted it,” she tells BoF. “I [indicated that it was] 'Shu Uemura' in the description and I think that's why I was able to sell it quickly.”

A Complex and Contradictory Consumer Psyche

Japan’s economy, the third largest in the world behind the US and China, surprised observers by growing at an annualised rate of 2.1 percent in the first quarter of this year, according to data released on Monday by Japan’s Cabinet Office. Since prime minister Shinzo Abe came to power, Japan has mostly experienced modest growth but the broader view is that Japan has been struggling to find its way out of the economic doldrums since the 1990s.

Though it remains one of the world’s largest luxury markets with old money and new money alike driving the sector, Japan's ageing population has traditionally positioned older consumers as the core focus for high-end brands. “Unlike China and other emerging countries, Japanese Millennials don’t have a prospect that they will have a better life, financially, than their parents,” says Gartner’s Douglas. “Luxury brands often hire young pop idols as a brand ambassador to target young consumers in China. However, we don’t observe the [same] trend in Japan.”

We can't afford expensive makeup products, but we still want them because we somehow think they will brighten up our routined lives.

Having come of age during the 2008 global financial crisis and Japan’s 2011 tsunami and nuclear disaster, the country’s Millennials are frugal shoppers relative to their preceding generation. Though  Abe's economic policies are expected to boost spending for post-Millennials aged 18-22 years old, old habits die hard.

While many are motivated by a renewed — or newfound — sense of pride in learning to become frugal, others are simply watching their wallets. “So many young people in Japan are struggling financially... it's really hard to find a stable job that pays a fair wage,” says Hashimoto. She says that it is common for shoppers her age to treat themselves with branded products but collect coupons on their mobiles and buy skincare at drugstores on days where they can collect extra points.

While the used makeup trend underscores this duplexity, Douglas notes that global brands can rethink their pricing and digital strategies accordingly. “For example, Shiseido launched a brand targeting Millennials called Recipist in 2017 that is sold only on e-commerce platforms with a lower price than Shiseido’s traditional brands.”

As an alternative to value-centric retail models, compelling brand experiences could be a compelling proposition for younger shoppers. “We can't afford expensive makeup products, but we still want them because we somehow think they will brighten up our routine lives,” says Hashimoto.

“We clearly don't see a bright future ahead of us, and all we can do right now is [to] have as much fun as possible while cutting off unnecessary spending and investing in experiences.”