SHANGHAI, China — Cardcaptor Sakura is a Japanese manga-turned anime television series starring Sakura, a cute puff-sleeved elementary school student moonlighting as a card-wielding magician to defeat the forces of evil. Given that the duo behind Shanghai-based label Shushu/Tong cite the anime as key point of inspiration, it’s no surprise that their pieces are often described as girly.

Yet, with aplomb unexpected of two designers who only made their runway debut last month, Liushu Lei (‘Shu Shu’) and Yutong Jiang (‘Tong’) have won over fashion industry press and buyers with refined tailored and sculptural designs that playfully incorporate saccharine bows, exaggerated ruffles, scalloped edges and gingham prints. “Every season we tell a different girl’s story,” Lei tells BoF. “It’s like writing a novel or anime, but with fashion.” 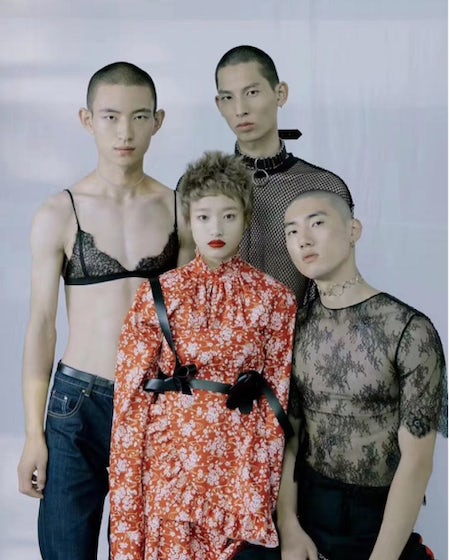 Over the course of a decade, the soft-spoken duo were flatmates intermittently and best friends throughout. After completing their master's degrees at the London College of Fashion and respective stints at Simone Rocha and Gareth Pugh, Lei and Jiang founded Shushu/Tong in 2015. But their relationship with fashion stems back as far back as high school. "My friends and I would always put a twist on our school uniforms — it was a way for us to rebel against the system," says Lei.

Shushu/Tong pieces are conceived through a female gaze, tied to cultural iterations of girlish adolescence and nostalgia. Where the brand’s edgier side is concerned, Lei credits sartorially daring Londoners and courageous anime protagonists for having inspired a rebellious streak. Like the urbanites and magic-wielding heroines, he hopes that customers too will be empowered “to wear the clothes for themselves, not for men, or anyone else.”

At the Spring/Summer 2019 season of Shanghai Fashion Week, Shushu/Tong’s latest heroine made her appearance. The collection, titled "Boudoir," was aimed at putting a streetwear-worthy spin on “bedsheets, curtains and the underwear that girls wear at home,” according to Jiang.

The collection captured the intimacy and dreaminess of Sofia Coppola’s cult drama The Virgin Suicides (another key source of inspiration), sans suburban ennui. A model sporting a girlishly overdrawn red pout walked down the runway in a sky blue and white knit polo top ($400) paired with short shorts in a matching knit ($115). Showgoers also saw a lilac gingham print blazer with ruffle-adorned shoulders ($850) and a white quilted duvet-worthy tent dress with voluminous bell sleeves ($1,250). The pieces would be on high rotation in the Lisbon sisters’ wardrobes, if they outgrew their white lace nightgowns and went to art school.

Our girls wear the clothes for themselves, not for men, or anyone else.

The duo’s knack for dressing their imaginary heroine has its appeal, even for the bow and frill-adverse. Farfetch market editor Celenie Seidel was drawn to the label by its “playful sensibility that simultaneously feels feminine and grown up.” As Shushu/Tong has matured, the designers have earned themselves a cool-girl following including the likes of pop songstress Rina Sawayama, and pieces have become stylists’ favourites in the editorial pages of Vogue China, Numero China, Elle UK and Wonderland magazine.

“Because of the brand’s eccentric style, it was a small clique of younger and more directional girls buying their collection at first,” says Kelly Wong, director of fashion at Lane Crawford, the label’s first major stockist. “Now they’ve expanded their collections and reached out to a wider customer base.” Browns womenswear buying director Ida Petersson adds that the brand is especially loved by the retailer’s East London clientele.

When asked if Shushu/Tong will ever return to London, it’s clear that Lei and Jiang have embraced Shanghai as their home base, not unlike many of their peers who are imbuing the city after years abroad. “More showrooms, platforms, boutiques and opportunities are here for designers, and the creative atmosphere feels quite fertile,” says Jiang. Looking ahead, Lei says the duo are eyeing cosmetics and perfume as potential projects for the future.