PARIS, France — When in 2009 Takahiro Miyashita shut his cult menswear brand Number (N)ine, he had some soul-searching to do. Despite the label’s critical acclaim, commercial success to the tune of $22 million in annual revenue and resonance with a loyal following of men’s fashion enthusiasts who felt connected, like the designer did, to alternative music and the films of Gus Van Sant, Miyashita felt unhappy. The company had grown beyond his control, with his investors pushing for the kind of continuous expansion that the designer felt compromised his creative vision.

He took a year off in order to concentrate on his mental health. But in 2010, Miyashita launched a new brand Takahiro Miyashita The Soloist. As the label’s name implies, this time Miyashita would keep a tight grip on its creative direction. His design team would be an army of one. “For me making clothes is like making music,” Miyashita said in a rare interview a few days ahead of his third Paris show for the label. “Number (N)ine became a professional band, one I did not want to be in. I was losing myself and I no longer felt like I was expressing myself through those clothes.” 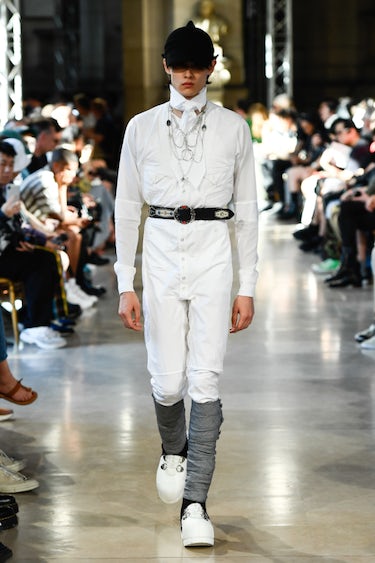 Miyashita began his new project slowly, with collections of garments that he felt were uniquely his. The standout pieces were the unstructured, multi-layered patchwork tailored jackets that looked fractured, like his own mind at the time. At first, he eschewed fashion shows and seasonal collections. Referred to, among fashion cognoscenti, simply as Soloist, the label quickly became a well-kept secret among the menswear aficionados. A return to the runways took almost nine years and was a difficult decision, in part spurred by the invitation from the Pitti Uomo trade fair in Florence to stage a double-header Fall/Winter 2018 show with Undercover, whose designer, Jun Takahashi, is an old friend. After that show’s success, Miyashita decided to stage a show at Paris Fashion Week for the Fall/Winter 2019 season.

Meanwhile, the designer was steering Soloist back to the cultural influences — such as Nirvana and The Beatles — that had shaped him in his youth and informed his DNA as a designer. And even though these groups may have lost their outsize influence with today’s youth, they remain central to his work. “I inevitably come back to these sources, because they affected me in my formative years,” Miyashita says.

As an auteur, Miyashita can afford to make his influences as narrow or as wide, as concrete or as abstract, as he wishes. His Spring/Summer 2019 collection, for example, was an ode to Charles Peterson, the seminal photographer of the Seattle grunge scene. It was heavily graphic, with garments sporting multiple patches. But Miyashita never relies on graphics alone.

One particular garment from that collection was a plaid reversible shirt with attached vest, essentially giving the wearer four ways of wearing it. The clothes from his first Paris show were even more complicated, featuring multiple zippers, removable linings and harnesses. “Taka designs menswear with the same complexity that I design womenswear,” Takahashi once told me.

His upcoming show, Miyashita said, will take references from Charlie Chaplin’s film Modern Times by the way of The Joker, as well as the work of the Japanese artist Kosuke Ichikawa, a friend. Such an unexpected amalgam, channeled through Miyashita’s singular mind, is what makes his design vision unique. The collection is also about dealing with his own mental health. “In 2003, I was on medication and I have no memories of that year, not of what I designed, or how the show was produced. I skipped one season that year. I am now piecing that year together from the memories of other people,” Miyashita says.

Designing feels therapeutic for me and remains the best way for me to deal with my own negative feelings.

Not compromising on design vision in terms of complexity of construction and use of materials can come at a cost — quite literally. Soloist’s clothes can be prohibitively expensive, with outerwear sometimes reaching the $7,000 mark. It does not help that after duties and shipping, Japanese designer fashion in general ends up costing up to 40 percent more in the US and Europe than in Japan itself. That’s partly why, Miyashita devotes about 50 percent of each collection to more accessible fare like t-shirts, jeans and hoodies that are not shown on the runway. Which is not to say that this is mere commercial filler. Miyashita pays equal attention to how he approaches a sweatshirt as he does a tailored jacket. Besides, he has always had an affinity for the uniform of American youth. 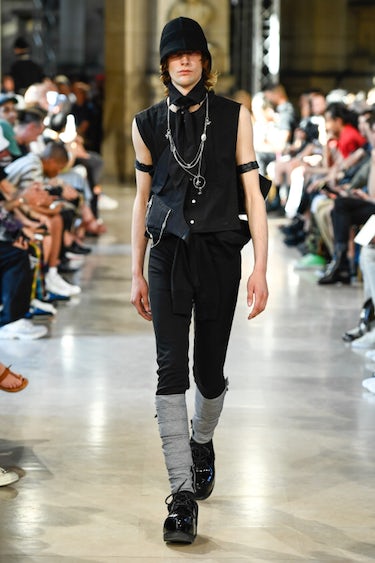 Soloist has a loyal community, not least amongst menswear industry insiders, who value Miyashita’s sense of creativity. “Miyashita may be the last great cult designer,” says Jian DeLeon, the features director at Highsnobiety. “Soloist, like Number (N)ine before it, brings people together, even guys like me who have never owned a piece but appreciate its aesthetic value and the consistent universe Taka has built. It's not a brand for e-commerce, and more one you'd find at a boutique and then talk about for two hours with the shop guy.”

Jack Cassidy, head of menswear buying at Selfridges, agrees: “What attracts me to Takahiro’s work is that each collection and piece he creates is so richly designed and inspired with a vivid narrative. The level of detail, construction, and execution is incredible and really differentiates the brand within the market.” In addition to department stores like Selfridges, Soloist is stocked at independent boutiques like IF in New York and Maxfield in Los Angeles. In total, in addition to five branded boutiques and department store spaces in Japan, the latest set to open in Fukuoka next month, Soloist is distributed in 55 stores in Japan and 60 in the rest of the world, and generates about $7.7million in annual revenue, not bad for a niche brand.

Despite the quiet success, Miyashita’s design process can be torturous. “I feel very inadequate and inferior at the start of each collection. I begin from the bottom, and I hope to get somewhere by its end.” Miyashita also plays music and takes photos, but design is in his blood. “Even having dinner with friends, or talking to someone, only half of me is present, and the other half is designing.” Surprisingly, the cult following Miyashita has acquired is not really on his mind. “Yes, it’s important to have a connection to my audience, but what really drives me is my own sense of constant dissatisfaction with myself. Designing feels therapeutic for me and remains the best way for me to deal with my own negative feelings.”