JW Anderson is fashion’s great hippie guru, and the romance was intense in the clothes he showed on Monday. 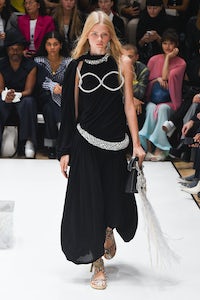 JW Anderson is fashion’s great hippie guru, and the romance was intense in the clothes he showed on Monday.

LONDON, United Kingdom — Why did I love Jonathan Anderson’s show so much on Monday? My response wasn’t rational. I felt like I’d climbed on a magic carpet and ridden through some extraordinary fairytale. In Aladdin pants.

Anderson lives to disorient his audience. His latest show was informed by his admiration for Canadian artist Liz Magor. A lot of her work has to do with infusing familiar objects – anything from a blanket to a shack – with oddity. We walked into a set of stacked plastic storage boxes, in each one a cast-off something or other, a scarf, a toy. In their exaltation of the banal, they were like reliquaries of lives past. The peculiarity was typical of Anderson. So was the playfulness.

The first look was a loose, black, bias-cut tank dress, waist swagged with silver, bust outlined cartoon-style. Shazam! 1001 Arabian Nights, thought I. That first impression was sustained through silken scarf-hemmed skirts, through pants nipped at the hem (Aladdin!), through gilded pantsuits, armoured bras, and a lamé cape with sci-fi imperialism. Queen of Outer Space? No, princess! Anderson’s collection saluted the princess with the fluted medieval sleeves on a sinuous black dress. So simple, but so sensual.

Anderson said Magor was one of his favourite artists. He loved the way she questioned the way we look at things. What are we actually seeing? That was his motivation for twisting the familiar tropes of fashion. Was the peplumed waist an echo of Dior’s New Look? Anderson puffed it, deflated it. Jewellery? He insisted he’d turned it into a kind of armour. “How do we take things we no longer want and re-position them?” he wondered. Magor gave him the answer. Make them desirable again. Give a trench coat a billowing cape back. Cut a sensual keyhole in a silver lamé tank dress, and rim that keyhole with rhinestones. Cape it! Swag it! Gild it!

He insisted there was no grand design. Live in the moment, enjoy the experience. It’s an ethos Anderson has also promoted through his work at Loewe, like he’s fashion’s great hippie guru. The romance was intense in the clothes he showed on Monday, with a soundtrack of surging strings as an aural counterpoint. The strings eventually resolved themselves into “Tonight,” the Smashing Pumpkins classic that Anderson claimed he hadn’t heard since college. It was heaven.