Her collection impressed with its sensual rigour and a razor-like precision that would suit the most exacting – possibly transgressive — demands. 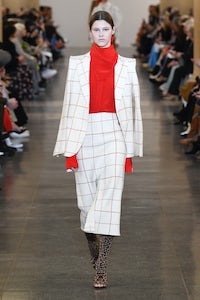 Her collection impressed with its sensual rigour and a razor-like precision that would suit the most exacting – possibly transgressive — demands.

LONDON, United Kingdom — After her show at Tate Britain on Sunday morning, Victoria Beckham rattled off a list of movies she’d been looking at during the lead-up to her latest collection. My ears pricked up when she mentioned “Secretary.” Did she mean that Maggie Gyllenhaal starrer from 2002, the one which explored a woman’s S&M relationship with her boss a whole decade before the Fifty Shades phenom kicked off? I don’t trust my hearing at the best of times, but it hardly mattered, because Beckham’s collection had already impressed me with its sensual rigour, and a razor-like precision that would suit the most exacting — possibly transgressive — demands. I mean, her boots alone, peep-toe, knee- or thigh-high…

Appropriately, the graphic motif of the collection was a chain, borrowed from a 70s print Beckham found in a fabric archive. It was literalised in the metal chain that linked the sleeves on a tweedy scarf/coat hybrid. That sounds tricksy, but the collection was actually a standout for its clarity: long, lean, flattering lines wrapped in immaculately tailored, strong-shouldered coats. There were skirts with a slight ruching on the hips, like 1940s screen sirens, and a black lace dress that Beckham was particularly excited about “because it took 22 hours and 27,000 stitches to make.” In her enthusiasm there was an echo of the young Victoria's dreams of becoming a fashion designer. Now, when she dreams something, she can make it happen.

And she’s getting much better at it. The first look — white windowpane-checked suit, strong- shouldered, partnered with a blouse in a colour Beckham called lipstick red (reminding us that there is a beauty range in the offing) — set the pace. Even more with the peep-toe leopard-print boot that accessorized it. The same vermilion-ish shade fired up Adut Akech’s camel coat/cape. Why was there something so irresistibly suggestive about such a look? The leopard boots? In tandem with the sober camel, maybe, but really it was just the subtly powerful fuck-offery of the whole effect. It even translated to the Argyle sweater and tweed pencil skirt outfit, with the neat little shirt collar pointing to secretarial propriety ready to cut loose (this time, the leopard boots helped a lot).

“I’m 44 years old, I’m a mum and a working woman.” Beckham ticked off the boxes. “And I let my clothes do the talking.” What they were saying this time was a whole lot more interesting.