PYONGYANG, North Korea — When tanks rolled down Kim Il-sung Square in Pyongyang, the capital of North Korea, last October — part of an enormous military parade celebrating the 70th anniversary of the ruling Workers’ Party, which included hundreds of troops marching in carefully choreographed formations — the image projected to the rest of the world was of business as usual in the isolated state. But away from the pomp of the country’s colossal parades and the continued sabre-rattling of the country’s leader, Kim Jong-un, change is simmering.

Most North Koreans still remain too poor to think much about things like fashion. The country’s paltry economic output yields an average annual income of around $1,800 for its 25 million citizens, according to 2013 figures from the CIA World Factbook. In comparison, South Korea, which has been separated from the North by a demilitarised zone since the end of the Korean War in 1953, boasts an annual per capita income nearly 20 times higher.

Nevertheless, in Pyongyang, where the standard of living is high compared to the rest of the country, clothes and styles have been changing in recent years — slowly and in a limited way, but more than many outsiders might think.

The plight of North Korea’s economy has been exacerbated by harsh, international economic sanctions, imposed after the country’s three nuclear tests, in 2006, 2009 and 2013. (Earlier this year, North Korea attracted international condemnation for a fourth test of its nuclear weapons programme, followed shortly by a long-range missile launch that many countries viewed as a front for a ballistic missile test.) These sanctions include bans on the importation of luxury goods, as well as arms embargoes and restrictions on access to international banking and travel. Yet several countries have enforced the regulations poorly, permitting a black market trade of luxury goods to emerge, supplying the country’s ruling elite.

Today, despite UN sanctions, a handful of department stores in the capital of Pyongyang are stocked with imported luxury goods: The Hae Dang Hwa department store looks remarkably similar to the shops you might encounter in Tokyo or Seoul, selling cosmetics goods branded as Chanel, Dior and Lancôme. Meanwhile the Rakwon (“Paradise”) department store, found on Changwwang Street in the capital’s central district, sells imported whiskey and Adidas footwear. 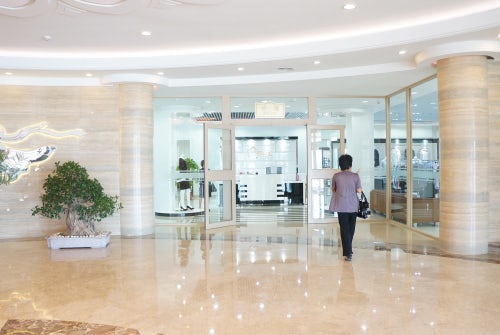 According to statistics submitted to the South Korean parliament in 2013, North Korea’s luxury goods expenditures have more than doubled since Kim Jong-un came to power following the death of his father Kim Jong-il in 2011. In 2012, imports of luxury goods in North Korea were reported to have amounted to $645.8 million, a sharp increase from the average of around $300 million a year under Kim Jong-il. The data also pointed to an increase in the importation of cosmetics, handbags, leather products, watches and cars.

In some cases, North Korea’s luxuries are bought directly from European suppliers. Swiss manufacturers reportedly sold the late Kim Jong-il millions of dollars’ worth of watches every year. But in most cases, luxury goods are purchased through intermediaries and smuggled through China, North Korea’s most important ally and biggest trading partner.

According to the Seoul-based think tank Korea Development Institute (KDI), trade between the two countries, which hit $6.39 billion in 2014, up from about $500 million in 2000, now accounts for almost 90 percent of all North Korean trade. “That’s really North Korea’s only economic portal to the whole world,” says professor John Delury of Yonsei University in South Korea.

However, a report by KDI stated that bilateral trade between North Korea and China dropped by almost 15 percent in 2015. And with the UN in discussions to impose additional sanctions against the reclusive regime, KDI noted that there is a high possibility that bilateral trade will contract further in 2016.

In addition to Pyongyang’s upmarket department stores, North Korea observers have noticed many other new developments in recent years, including Western-style restaurants and cafés, a ski resort and even an amusement park for those who are wealthy enough to afford it. At the same time, outside the capital there are still reports of malnutrition due to the lack of food, clean water and medicine, indicating the existence of a two-tier economy.

With the government in charge of social classifications (known as the songbun caste system), wealth has always been determined by political standing and ‘degree of loyalty’ to the state. But the burgeoning black market, however, is subtly interfering with the government’s control.

Jangmadang, which translates as “marketplace,” is the term used for the often illegal, yet tolerated, black market in North Korea, a phenomenon that has accelerated under Kim Jong-un, experts say. The jangmadang generation grew up during and after the famine of the 1990s and are now aged 18 to 35.

“It’s distinct because this generation grew up in a market economy, not relying on the state socialist economy,” explains Park, noting that this age group makes up “approximately 25 percent of the total population — about 6 million people.”

“Jangmadang is a very important scene for the North Korean economy,” says Inhae Yeo, director at Oikonomos, a fashion communications agency focused on intercultural relations. Indeed, not only does jangmadang undermine the songbun caste system of North Korea, it is also estimated to account for as much as 80 percent of family income. For post-famine North Korea, there is one real economic rule, she says: “don’t follow the rules.”

“You have trucks going across the border between North Korea and China. Every night there’s shipment going back and forth, carrying all sorts of things [some] legal and [some] illegal,” says Park. The items are then sold, either in tolerated official marketplaces or from private houses that effectively act as unmarked shops, he explains.

“Schools and universities are also sites of exchange,” says Adam Cathcart, a lecturer in Asian history at the University of Leeds and the editor of SinoNK.com, a website focused on Northeast Asia. They offer a safe place to barter, he explains, instead of buying goods in dodgy black markets where shoppers are sometimes cheated or sold inferior goods by transient merchants.

One of the biggest influences on the jangmadang generation is South Korea’s hallyu (a word used to describe the overseas popularity of South Korean pop culture). South Korean movies and K-pop songs, as well as foreign blockbuster films, are smuggled into the country on USBs and DVDs. Many North Koreans have become enamoured with this culture — its celebrities, fashion, food and catchphrases.

The South has been using this to its advantage. In response to North Korea’s perceived aggression, South Korea has retaliated with its own psychological warfare, blasting K-pop hit songs from border loudspeakers, which include chart-topping tracks from boy group Big Bang, led by G-Dragon, a Korean superstar with a huge following across Asia.

“It goes without saying that South Korean music and soap operas, in particular, are dangerous to the North Korean state as they indicate South Korea’s obvious wealth and living standard advantage over the North,” says Cathcart. They also pose as an insult to the North, where people are only allowed to listen to and watch government-sanctioned music and films.

To act as a riposte to South Korean pop groups like Girls Generation, Kim Jong-un has formed his own band: a North Korean girl group called Moranbong, who are building their popularity on hit songs such as “My Country is The Best!” and whose existence suggests a new acceptability of previously censured fashion styles, such as short skirts and high heels.

With police constantly patrolling the streets, most North Koreans have abided by the state’s strict rules on how to dress. North Korea observers report that clothes should be loose; skirts should be knee-length; jeans should be black (blue denim is seen as a symbol of America, a sworn enemy of the State); and dyed hair is unacceptable. On special occasions, women are expected to wear the joseon-ot, a traditional Korean dress not dissimilar to the hanbok in South Korea.

But in recent years, the rules have relaxed and the sight of women wearing high heels, shorter skirts and branded bags are no longer unusual on the streets of the capital, says Vicky Mohieddeen of Koryo Tours, a travel agency that specialises in trips to the isolated country.

“Most people settle for Chinese counterfeits, but still follow trends as closely as they can,” she says. Indeed, a fake version of a pair of shoes worn by South Korean actress Kim Tae-hee went on sale in a Pyongyang department store last year and imitations of trench coats from Burberry have also been spotted in the city.

Kim Jong-un’s wife, Ri Sol-ju has even been seen carrying a Christian Dior handbag, making North Korea’s first lady into something of a fashion icon for the country’s population.

But while subtle signs of foreign influence are popping up, Yoo Ho-yeol, a professor of North Korea Studies at Korea University in Seoul, believes that these changes are not indicative of a genuine, fundamental acceptance of new ideas. If anything, they are part of Kim’s political agenda to cast himself as a leader that is “familiar with this new and advanced culture,” he says.

Nevertheless, the fashion choices being made by the jangmadang generation are still a dramatic change when seen in the context of North Korea’s isolated society and repressive regime.

“Just being able to mimic South Korea or other foreign fashions takes on a higher meaning in North Korea than it would in other countries,” says Park.