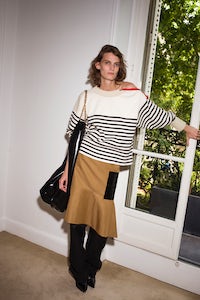 PARIS, France — Sonia Rykiel is down to three bidders, each vying to buy the troubled French brand out of receivership, or the French equivalent of Chapter 11 bankruptcy protection.

Offers from the three, which were selected from a group of nine original bidders, were reviewed during a closed-door hearing at a commercial court on Monday morning with members of the company's management and workers' council in attendance. Some of the bidders who were not selected were more interested in the company's well-known trademark than the struggling business.

The news comes after the court granted, on April 30, Sonia Rykiel's request for bankruptcy protection while it searches for a new owner after several business restructurings and rounds of layoffs.

First Heritage Brands, which currently owns the label and is helmed by French luxury executive Jean-Marc Loubier, is eager to unload the asset. Facing a sharp decline in sales and a rocky recent split with designer Julie de Libran, Sonia Rykiel filed for bankruptcy protection in France and liquidated its presence in the US. It has shut down all of its stores, apart from six in France and Monaco: Boulevard Saint-Germain, Faubourg Saint Honore, Monte-Carlo, Bordeaux, Cannes, Deauville, plus outlets and e-commerce. The company currently employs 130.

Diemoz, who was Balmain chief executive from 2003 to 2017, saw the label through a similar process of restructuring during his tenure. Diemoz’s plan for Sonia Rykiel is said to focus on the brand's core categories — knitwear and ready-to-wear — and include a reduction in the size of its retail network to three stores: the Boulevard Saint-Germain, Monte-Carlo and Cannes. His bid is conditional on terms of the rent for the Boulevard Saint-Germain flagship. He is said to already have a new designer in mind and plans to reduce the total workforce to 40.

The second bid comes from a family residing in Paris whose name remains undisclosed. Their plan involves a strong focus on digital. They are also interested in the Boulevard Saint-Germain flagship but the store is not critical to their approach. They would also reduce the workforce to around 40 employees.

The Chinese investor, who has never acquired a French brand before is still in the process of completing due diligence.

The deadline for final bids is set for July 18. The next hearing is scheduled for July 25 and final judgement is expected 7-to-10 days later. Meanwhile, Sonia Rykiel's studio presented a Spring/Summer 2020 Pre-Collection last week in Paris.

First Heritage Brands, which is backed by Li & Fung billionaires Victor and William Fung in partnership with Loubier, also owns Paris-based shoemaker Robert Clergerie and luxury leather goods label Delvaux, both of which it acquired in 2011.

Sonia Rykiel Seeks Bankruptcy Protection in France, Liquidates in the US