NEW YORK, United States — “There is absolutely no separation, now, between fashion and politics,” says Stella Bugbee, editor-in-chief and president of New York Magazine’s digital brand the Cut, remarking on an approach that has become standard practice at women’s titles from Teen Vogue to Bustle in the age of Donald Trump. “Five years ago, it felt strange.”

In 2012, then four-year-old online fashion tabloid the Cut took its first steps to bridge the gap between fashion and politics, announcing plans to transform itself into a magazine-blog hybrid covering relationships, feminism, politics and style through its personal, and often sarcastic, signature voice. “I knew it would work because it was for me and everyone I knew,” says Bugbee, then editorial director. “If there was no site for us and I could make one, then maybe there would be an audience for it.” Elsewhere online at the time, women’s interest blogs such as Jezebel, the Hairpin and Slate’s Double X were balancing pop culture and politics in a way that fashion magazine websites were still trying to figure out.

But the expanded ambition was a risk for the Cut. “We bet on it and we put all of our energy behind it,” says Bugbee, recalling some of the most frequently covered personalities by the site in 2012: Vogue’s Andre Leon Talley, model Karlie Kloss and Kate Middleton. So when the Cut covered Hillary Clinton’s first bid for the presidency, it was jarring. “A lot of comments on the site were like, ‘You are a fashion website, why are you covering this,’” Bugbee continues. “We plowed through that confusion quite resolutely.” The magazine’s history also helped: When Gloria Steinem was a staff writer in 1971, she launched Ms. Magazine in one of its issues. 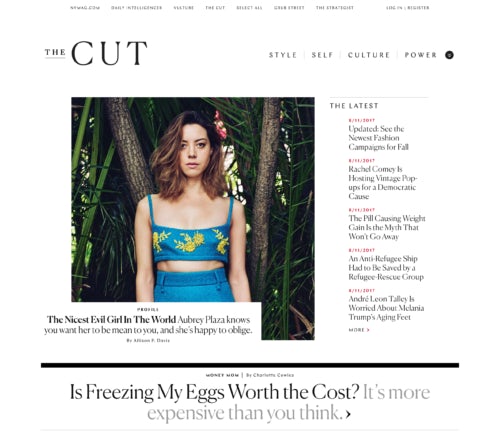 “It comes from the DNA of New York magazine, which has this enormous reservoir of authority in the cultural space and political space,” says Pamela Wasserstein, who became chief executive of the magazine’s parent company, New York Media, in 2016. Her late father Bruce Wasserstein bought New York magazine for a reported $55 million in 2004, not long before it started investing heavily in new digital brands. The weekly magazine became a biweekly in 2014, after which the Cut took over a new six-page section per issue.

As the appetite for news coverage with a feminist point of view grew during the 2016 election, the Cut was already resonating with an audience of millennial women who cared as much about style as they did reproductive rights. Since the relaunch, the site has expanded its scope to also include motherhood and health, careers and ambition. The staff has almost tripled to 27. Blogging, or aggregated news stories, now account for only 30 percent of each day’s average of 40 stories. Original columns, recurring series and commissioned photography are the priority. High-profile writers including Rebecca Traister and former New York Times fashion critic Cathy Horyn are regular contributors.

“Fantastic personal essays and longer form pieces that you might ostensibly see in women’s magazines every now and then — for the Cut, it has become a primary stable,” says Elizabeth Spiers, founding editor of Gawker, media consultant and now founder of creative and research firm The Insurrection. She adds that the site's ability to attract talented editors and writers distinguishes it from other outlets. “You can’t scan a site the way you can scan a magazine; the entry points have to be a lot stronger… I think the Cut has really done a good job with that.”

From 2012 to 2017, monthly unique visitors have grown from 2.2 million to 7 million, according to the company. (The entertainment vertical Vulture gets the most traffic out of the digital brands.) "We’ve benefitted from taking our own work seriously for a really long time,” says Bugbee. “The Cut is a psychographic; it’s not a demographic.” Only 18 percent of the audience comes from the New York metro area; 31 percent is international.

The evolution wasn’t without its growing pains. “There are things that felt right three years ago that really don't feel right anymore,” says Bugbee, adding that objectifying no longer felt as transgressive after the election. (See "Orlando Bloom’s Nude Form Disappoints Me," from last August.) “We really backed off on a lot of things.” Bugbee credits New York magazine editor-in-chief Adam Moss for encouraging constant self-examination. “It really comes from Adam, the relentless pursuit of originality and our own end voice,” she says. “It’s all about tone.”

Meanwhile, Bugbee has emerged as a leader in a new generation of editors: she was in the running for editor-in-chief at InStyle in 2016 and offered the editorship at the New York Times Styles section this summer. Not coincidentally, she was promoted from editorial director to president and editor-in-chief of the Cut in June, a role that does not exist at any of the magazine’s other verticals. (Wasserstein turned down the notion that New York Media might be inclined to eventually sell the Cut, which also migrated to its own URL, TheCut.com, in May.) “I'm helping to shape the growth of the business,” says Bugbee about her new responsibilities.

But first, a site redesign six months in the making is set to go live on Monday, complete with a new logo and a mobile-first modular design organised around four sections that reflect the transformation of the past five years: style, self, culture and power. Ample white space is meant to balance the often irreverent headlines. (Recent examples include: “Report: Men Forced to Do Stuff While Women Attended March” and “The Truth About Women and White Supremacy.”)

Original content gets top billing, as does fashion and style. The site is publishing a new fashion portfolio each day during the launch week. Rebecca Ramsey, fashion director of both the Cut and New York Magazine, usually produces one editorial per week. “Style is still a really fundamental brand identity of what we do, and to me, it’s the backbone,” says Bugbee. “We've grown up a little bit and we’ve increased our ambition level, and this site just reflects that better.” She describes the homepage as a luxurious advertisement for brand partners and new readers.

Style is still a really fundamental brand identity of what we do, and to me, it’s the backbone.

Brands across the market — but particularly in fashion, which represent the majority of New York magazine’s advertisers — are looking for premium environments for their online ads, says Wasserstein. “We are presenting a solution for what is a widespread industry concern.”

With a new site design in place that reflects the Cut’s evolution, Bugbee and Wasserstein plan to accelerate revenue — which currently comes from a combination of advertising, e-commerce affiliate marketing and branded content — in new ways. Wasserstein declined to share revenue numbers, but said The Cut’s advertising revenue was up 10 percent year-over-year in July and more than 60 percent of New York Magazine’s advertising revenue is digital.

“We are doing a lot more custom work than we used to,” says Wasserstein. Recent examples include an article on niche fragrances for Sephora and a video on summer dressing for DVF. “With Stella in this position and advising our [branded] content studio on how to have that conversation in an authentic way… it’s a great opportunity.” New revenue streams to explore include events — “If not this fall, then in Q1 we will do a big Cut event moment,” says Wasserstein — newsletters and more video series. The Cut is a launch partner for Facebook’s original video platform Watch, where media brands will take a reported 55 percent of ad break revenue. “Nothing is off the table,” says Wasserstein.”

“The core of who we are is not any different than it was five years ago — it's just bigger,” says Bugbee. “When I inherited it, it was the funniest fashion website ever, probably... Right off the bat, it was different from everything else. And it has stayed like that.”