With the release of his first issue at the LGBTQ publication, the editor-in-chief lays out his vision for rejuvenating the troubled title: influential voices, inclusivity and not reflexively playing into the news cycle. 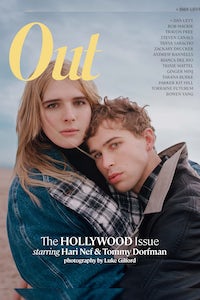 With the release of his first issue at the LGBTQ publication, the editor-in-chief lays out his vision for rejuvenating the troubled title: influential voices, inclusivity and not reflexively playing into the news cycle.

But that strategy's emphasis on volume of online posts had diminishing returns. “At a certain point, growth happens at the detriment of the voice of the site and at the detriment at the health of your employees,” said Picardi, describing it as one of the most important lessons from his time at Condé Nast. Now, success in media is largely dependent on building loyal relationships with readers, not chasing clicks.

“Today, it’s less about the outlet and it’s more about the voices that compose the outlet,” he said. “Publications that still strive for that singular voice are missing the point.”

Picardi was a star at Condé Nast, where he also launched a digital LGBTQ publication, them, in 2017. It was surprising when he left Condé Nast last autumn for Out, a print magazine widely seen as a decade or more past its prime.

Today, it’s less about the outlet and it’s more about the voices that compose the outlet.

One of the first national magazines for gay men and women to cross into mainstream success, Out was founded in 1992 with a focus on fashion, entertainment and pop culture, later evolving to cater specifically to gay men. It peaked in popularity in the aughts, reaching a total circulation of about 200,000 in 2008. While circulation has stayed nearly the same since, single copy sales have decreased from an average of 12,000 in 2008 to an average of 1,640 in the first six months of 2018, according to the Alliance for Audited Media.

In his first issue as editor-in-chief, Picardi eschewed overt activism, dedicating the month to celebrating representation in Hollywood. Actors Hari Nef and Tommy Dorfman are on the cover, and inside readers will find profiles on celebrity stylist Jason Bolden, an essay by “Boy Erased” author Garrard Conley and a portfolio of LGBTQ leaders working behind the scenes in the entertainment industry.

Picardi has something of a blank slate to work with at Out. In 2017, a Los Angeles private equity firm, Oreva Capital, acquired the magazine’s parent company, which also owns the LGBTQ newsmagazine The Advocate and Pride. Its previous owner, Here Media, had a history of not paying contributors or staff.

The company rebranded as Pride Media and hired Nathan Coyle as chief executive from Domino magazine in June 2018.

Out may have new backers ready to invest, but it also has more competition. From mainstream outlets like GQ to niche fashion publications like Dazed and Paper, content designed to appeal to LGBTQ audiences is easier to find than ever.

How do we now try and re-enter this space as the dad at the table who is trying to modernise and show people that we can relate?

“How do we now try and re-enter this space as the dad at the table who is trying to modernise and show people that we can relate?” said Picardi. “Our community wants to read stories about ourselves.”

Picardi’s larger goal is to step away from Out’s identity as focused only on gay men, a strategy that at one time drew more advertisers amid a wider cultural focus on marriage equality.

And he wants to differentiate the magazine with its slate of editors and contributors — people who reflect the wide diversity of the queer community. They also bring their own following to the publication from their past experience and other projects.

Executive editor Raquel Willis, for example, is a former organiser for the Transgender Law Center; columnist Ira Madison III is a critic and host of a Crooked Media pop culture podcast.

Other hires include fashion director Yashua Simmons, senior editor Mikelle Street and advice columnist Ashley Ford. Now that Pride Media has also hired Zach Stafford as the new editor-in-chief for The Advocate, Picardi expects the two sister publications can share some senior editorial positions as they grow. Once rivals in the market, The Advocate is more focused on news and long-form journalism, while Out is more about culture.

Picardi will also bring on special guests for future issues, which will include theme editions focused on Pride month as well as fashion, beauty and art. Activist Janet Mock is already working on the March issue as guest editor.

“Everyone needs to know that a new day has come,” he said, highlighting Out’s new logo, now a thinner, italicised serif type designed by Katarina Batina that Picardo hopes is softer and less masculine.

Coyle, who first met Picardi when they were both working at Refinery29 four years ago, echoed his enthusiasm for the potential of a new era at Out. “Brand, in this publishing landscape, is really something that is going to separate winners from losers,” he said, adding that as interest in sexual and gender identity expands, Pride Media’s point of view will no longer be niche in the coming years.

In the meantime, Coyle said Out’s print advertising revenue is bucking industry trends: largely flat in recent years, he expects it to increase in 2019. Print revenue will provide a foundation on top of which Coyle wants to build a digital advertising business. He also wants Out to integrate e-commerce affiliate links that take a cut from sales driven by readers on the site.

Other revenue-driving initiatives Coyle is working on include international expansion, developing projects for television “that can really start to bring incremental revenue completely independent of advertiser dollars,” and extending Out's slate of events. The tentpole remains Out100, in honour of the most influential people in the LGBT community, a yearly celebration that will be reimagined under Picardi this autumn.

Oreva Capital’s founder, entrepreneur Adam Levin, is the owner and chief executive of the parent company of cannabis magazine High Times, which filed for a mini-IPO in August.

“In today’s competitive media landscape, I thought there was a real opportunity to reinvent the [Pride Media] brands and create compelling content that would allow the brands to thrive for many years to come—in print and online and other mediums and platforms, as well,” Levin later told the LGBTQ newspaper Los Angeles Blade, where he described himself as fiscally conservative and socially liberal.

“I will continue to invest in Pride Media, because I believe it is a critical voice for good and aligns with who I am personally,” said Levin in an editor’s letter published by WWD in October.

When asked if Pride Media might follow High Times into a mini-IPO filing, Coyle said the company is exploring its options without confirming any specific plan. “We will likely pursue some form of means for infusing additional capital into the company this year,” he said.

Meanwhile, Picardi’s focus is squarely on content, which marks a significant change for him personally.

At Condé Nast, he said he was accountable for his titles’ revenue performance, but did not have control over the strategy implemented by the publisher’s business side. While he said he asked for that added responsibility, it left him “deeply unhappy and unfulfilled."

“The more you get involved in the corporate monotony, the more you lose touch with why you got into the job as an editor to begin with,” said Picardi. “I’m not an honorary salesperson… I’m not going to be your chief marketing officer,” he said, adding that his focus on editorial allows him to be a “better manager or be more present to edit the website.”

While print is a new platform for Picardi — he will relaunch Out Traveler issues this year, to tap into the active travel advertising market — much of his focus remains online. A redesign of Out.com is in the works, and in December it registered 1.42 million unique visitors, according to the publisher. The website won’t be a place for chasing the news cycle, though.

“News happens that affects the community that we are going to need to cover; to me, it’s — how are we going to cover it in a way that’s intelligent?” said Picardi. “[It’s about] cementing authority rather than regurgitating.”