Typically these events bring together a small army of makeup artists, photographers’ assistants, editors, bookers, publicists and caterers, often travelling from other countries, in addition to the celebrity subject and photographer.

But this time, Marchetti shared the space with only the photographer, one assistant and the cover star, Dr Caterina Conti, a lung specialist at the hospital in Bergamo, an Italian city that has been among the hardest-hit by the coronavirus. Everyone wore masks and stayed two metres apart, washing hands after touching anything on set.

The shoot, the cover star and the closed set were all major departures for Vanity Fair Italia, a bi-weekly that focuses on fashion, entertainment and cultural coverage, featuring A-list stars and artists. But the coronavirus pandemic crisis in Italy, which has seen nearly 70,000 infected and more than 6,000 dead, has forced a shift in priorities. The magazine has turned its coverage to heavier topics and regular people, like a family of pharmacists in Salerno working to treat their neighbourhood even though their daughter is infected. All revenue from the new issue will be donated to the Bergamo hospital. Its previous issue, entitled #IosonoMilano, was dedicated to the city and inspirational stories from its inhabitants.

“This virus and this situation forced us to change,” said Marchetti, who described the pandemic as an opportunity to redefine the publication and reach new audiences online and in print. “We can’t put a star on the cover anymore, at this moment.”

Vanity Fair Italia’s coverage is resonating: its web traffic is the highest it has ever been (a record 14.2 million visitors in March so far) and the free online download of the #IosonoMilano issue has brought in 12,000 new readers.

Glossy magazines around the world are confronting a similar identity crisis. Everything from their publishing cadence to their focus on luxury fashion risks feeling out of sync at best and tone-deaf at worst to readers isolated in their homes, who are tracking rapid-fire public health updates and worried about the economy.

The issue of GQ arriving in readers’ mailboxes this week, featuring Daniel Craig — in what would have otherwise been a major coup landing the James Bond star as the latest blockbuster came to theatres — already feels like it is from another era. (James Bond now won’t hit theatres until November.)

American Vogue's upcoming issue will still include an editorial featuring fashion from the upcoming Costume Institute exhibit, as it does each year to correspond with the Met Gala held in the first week of May. But the Met Gala has been indefinitely postponed, and the Metropolitan Museum is closed until at least July. As it sent its May issue pages to the printer over the last two weeks, Vogue had time to reframe many of its planned stories in light of the pandemic and lockdown in most American cities, as did other titles.

The pandemic is also further straining a business model that was already struggling, as advertisers and readers move online. The coronavirus crisis keeps editors and the readers in isolation at home, tracking public health updates and worrying if packages and even magazines can carry the virus (the Centers for Disease Control and Prevention says there is no evidence that Covid-19 is carried through the mail). Newsstand sales are likely to plummet as bookstores and magazine shops close. With economists predicting a severe recession, brands are earmarking print advertisements as one of the first places to cut costs. Digiday reports that 88 percent of publishing executives expect to miss their revenue targets this year.

What can magazines do to find purpose during this time? For Vanity Fair Italia, the answer has been in galvanising the Italian community and reminding it of its history of overcoming challenges.

At the end of February, when the coronavirus started to spread in Italy, Marchetti and his team rethought their editorial plan and created an issue dedicated to the strength of Milan, the first major Italian city to see a large number of infections. The issue, called “#IamMilano,” featured essays by 64 prominent people in Milan, including fashion designers Miuccia Prada, Domenico Dolce and Stefano Gabbana. 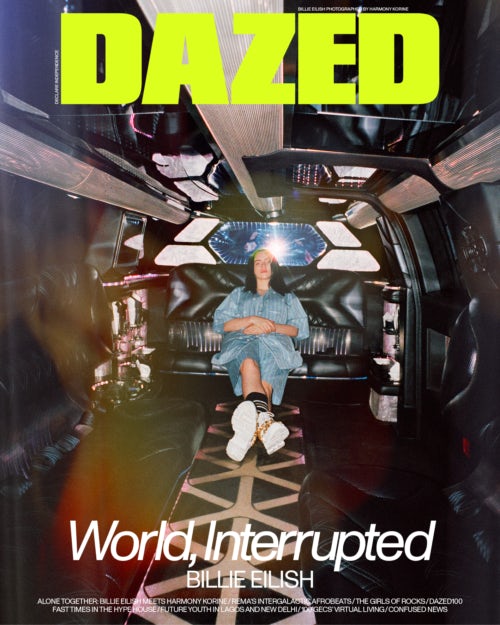 Unable to photograph all these people as the city shut down, the editorial staff used existing images in black-and-white to create a collage cover. The magazine was distributed free online and in print in Milan and Lombardy. An Instagram feature that allowed users to put their own faces on the cover went viral, tapping into readers’ desire to express their pride and connection to Milan, Italy or their own afflicted cities.

London-based Dazed magazine is also making its latest issue, out Tuesday, available for free online a week before it is available in stores. Founder Jefferson Hack said the publication’s staff took time to clarify its purpose in light of the coronavirus crisis, and is focused on using its communication channels to “guide and inspire our audience” and listening and involving them in creative projects.

“How many Netflix series can you watch before you go insane?” he asked, emphasising that Dazed has to be authentic, socially responsible and transparent, otherwise it risks alienating its audience. “The bandwidth for bullshit is fucking really reduced.”

His conversations with advertisers have shifted, too, focusing now on how they can partner on relief aid projects.

“It’s a relationship of shared clarity of purpose and where we are aligned, business will follow,” said Hack. “There is no business as usual after this.”

Hack said that Dazed will not print a physical issue for the summer edition, instead releasing it online. The team plans to involve readers in content by, for example, having them submit interview questions for subjects over Instagram.

Condé Nast is not planning to skip any print editions. In the US, most of the publisher’s titles finished sending their May issues to the printer last week and this week, and were able to photograph and write most content before the publisher shifted to working from home about two weeks ago. But by the time those issues come out in mid-April, their reader will be in a very different reality than editors could have anticipated at the beginning of March, before school years and the Olympics were cancelled.

There was time to make some changes to article text and editor’s letters.

“We tried to keep things open-ended, we tried to say at various points we don’t have a crystal ball, we’re not sure where you’ll be reading this,” said Allure Executive Beauty Director Jenny Bailly.

But producing its next issues will prove to be more challenging. The staff is working from home — Vogue Editor-in-Chief Anna Wintour leads a morning all-staff meeting on Zoom — and no photoshoots are planned. On Tuesday, Wintour announced a new fundraiser organised with the Council of Fashion Designers of America to benefit struggling American fashion designers, which will include a Vogue.com video series of interviews with small business owners.

Magazine print teams will see their creativity tested as the lockdown continues indefinitely. Over at Allure, Bailly said the beauty magazine already had several shoots completed for the summer issues but is also tapping illustrators, photographers with at-home studios, and creative partners who live together and can collaborate together.

While Allure’s infamous beauty closet remains at the now-empty office, Bailly said the staff had plenty of products at home to review and recommend in upcoming posts, and are hosting virtual “deskside” meetings with brands and publicists who present upcoming products via Zoom.

“We can still create some really great, inspiring images without leaving our homes,” Bailly said.

We can still create some really great, inspiring images without leaving our homes.

In China, arranging photoshoots is still a challenge, and editors like Elle China’s Beauty Director Lettie Tsang, who went to Tokyo at the end of February for a shoot, must self-quarantine for two weeks upon their return. (All travel, even domestic, in China requires two quarantines, one at the destination and one at returning home.) “I believe for all of the media, we will have more digital content in the future, that’s for sure,” she said.

For now, in the US and Europe, printing presses are still operational.

But Chinese fashion magazines have already had to deal with printing delays. At the beginning of the outbreak, InStyle China combined three issues into one because the printer shut down, but has since kept on its weekly schedule. The magazine had photographed most of its covers before Chinese New Year when the pandemic escalated, so covers remained as planned. But inside the magazine’s pages, much of the coverage has shifted to virus-related content, but with a more positive spin focused on self-care and the effect on culture. There is still no planned future travel, especially as the pandemic outside of China worsens.

Another challenge is advertisers, who are pulling back on budgets as they project steep sales declines this year. Kering’s stores are closed in much of Europe and North America; Chanel shut down stores and factories completely.

“We want to help them, they are our partners,” Vanity Fair Italia's Marchetti said of advertisers. “We are on the same boat, but people are still buying magazines. They want information now more than ever.”

How to Talk to Customers During the Coronavirus Pandemic