LONDON, United Kingdom — This time last year, LOVE Magazine was a couple of weeks into its online Advent Calendar, every day a nubile, semi-naked supermodel celebrating “everything we love about women enjoying being women, on their own terms,” according to editor Katie Grand. Visit LOVE’s website – or its new YouTube home - this December, and the story has changed dramatically. The Calendar has transformed into #movingLOVE, 44 short films with a cast of characters that is textbook diverse in age, race and gender.

Some of them perform, some of them simply tell their stories. Grand’s own favourite is April Ashley, the 83-year-old transgender pioneer. Iconic she may be, but for many LOVE-ers, this will be their introduction to a woman whose trail blazes brighter than ever through society’s current turbulent transitions. Ashley shared #movingLOVE’s last day of filming with Kate Moss. “It was one of the defining moments in my career that I could put those two people together,” says Grand.

Them’s strong words, given that Grand has made a career out of defining moments in fashion, in her work with Marc Jacobs and Miuccia Prada, among many others, and with her track record in magazines. (She’s launched five to date.) Everything she’s done has been saturated with the zeitgeist. Look at LOVE’s evolution alongside the Instagram generation of models, the Jenners and Hadids, the Karlies, Caras and Stellas. It became their club magazine, the unselfconscious chronicle of their work and play. But the climate changed. Post-#MeToo, a lingerie-clad Emily Ratajkowski lubriciously slurping spaghetti in last year’s Advent Calendar was no longer quite the easy, breezy image of female empowerment that was intended when it was filmed earlier in the year.

The ensuing controversy confirmed Grand in her conviction that it was time to move. “There’s a general air of some kind of revolution at the moment. I can’t think of any seismic change in the last ten years like what happened last year.” There was never a question about doing another calendar, though, at that point, Grand wasn’t sure what could take its place. Maybe nothing, though it didn’t make sense to ignore the audience that LOVE had acquired for its December spectacular. The answer was under her nose, in her kitchen at home.

For the past three years, Grand’s husband Steve Mackey has been collaborating with fellow musicians Douglas Hart and Jeanette Lee on @callthis_number, a gorgeous guerilla film-making project. They've been shooting other musicians – the Pop Group, Peaches, Dennis Bovell, Jon Spencer — in a garage in West Hampstead (later reconstructed under 180 The Strand), editing the films on the spot, screening them, then deleting them, all in a day. “I was frustrated by the Internet’s literalness, its need to catalogue everything,” says Mackey. “The fact that you could switch off after 90 seconds and go back to it later meant there was no excitement. I wanted the unrepeatable thrill of the moment, just letting it be what it was. Like rave culture, you had to know where to find it if you wanted. You had to ‘call this number.’”

Grand and Mackey kept their various spheres of influence distinct till they worked together on a set of short films for MiuMiu’s last collection, which matched @callthis_number’s rawness and spontaneity with the similarly confrontational essence of the collection. That was Grand’s Eureka moment, when she saw what #movingLOVE could be. “I think it was the thing of my close friends being really excited by what we were doing - and excited in a way I’d not heard for a long time.” 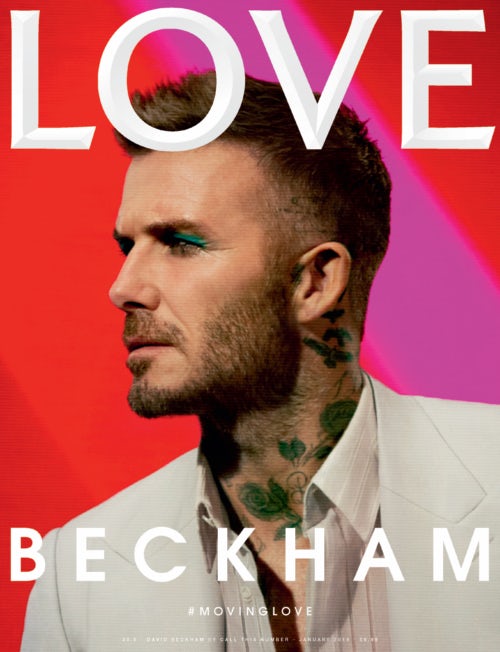 #movingLOVE has had a similar effect on her. “This is probably the most work I’ve done. The magazine’s been not this intense for me for years.” It launched the first week of December with David Beckham, styled by Kim Jones (who makes his own appearance in another story). The dissociation from last December couldn’t have been more deliberate. “It made sense because he’s not from the same world, so it was always going to be so far away,” Grand explained. “But to have him walking onto the set in blue eyeshadow was quite the thing, I suppose.”

Mackey and Hart pushed the idea of telling a story, so each subject is interviewed on camera. “Just connecting a person’s voice to their image changes everything,” said Mackey. “Four cameras, nowhere to hide, not presenting anything other than themselves. They asked ‘What you want me to do?’ but we didn’t direct them too much. You find out what they can do.” The camera contemplates the subjects unflinchingly while we hear their voices on the soundtrack. There is music too. It could almost be the Velvet Underground accompanying April Ashley while she sits in state. That tugs at a very timely thread which runs through #movingLOVE, echoes of the “screen tests” that Andy Warhol used to make of visitors to his Factory, and of the rough and ready shows his acolytes would make on public access YV in New York in the 80s. They’re included in the jawdropping Warhol retrospective now at the Whitney Museum.

In my optimistic moments, I imagine all of this – the rawness, the spontaneity, the resistance to all things perfectly manicured – as the green shoots of a new creativity.

“It was like Carpool Karaoke, but new,” is Grand’s take on her project. Some performers did what they did best. Liv Tyler threw off her shoes and danced, Sandra Bernhardt talked, Stella Maxwell put on a Prada swimsuit and did Stella Maxwell. Less predictable were radical New York performance artist Kembra Pfahler, and, of course, Ashley. As an elegant veteran of shoots with Avedon, Penn and Bailey, she was distinctly underwhelmed by the garage. Grand was worried she would walk. Mackey and Douglas ended up spending a lot of time with her.

With Hart, Mackey shot stills throughout the filming with the idea of releasing a print document at the end. “Imagine how happy we are that the two exist together. It’s not easy to make 50 films and 250 pages at the same time.” But what joy — a film and a magazine, vestiges of old media, celebrating the new, proving that nothing ever really dies. The magazine will be released in a limited run of twenty thousand copies, with one advertiser (Celine).

It rather begs the question of what’s next for the mothership, especially after a project which has disturbed LOVE’s prevailing ethos. “I thought of Issue 20 [the 10th Anniversary Issue which came out in the autumn] as the end of Chapter One,” says Grand. “The working title of this was Chapter Two, before I came up with #movingLOVE.” Still, she acknowledges a challenge. “For a long time, I’ve been thinking magazines shouldn’t be rigid anymore. Sometimes it’s good to do projects which aren’t two hundred pages of paper that are always the same. We’re very fluid in how we work financially and timewise. There aren’t really any boundaries. This is the biggest project we’ve done that didn’t have boundaries – and the most expensive.”

Ah yes, numbers. Grand claims one of the best things about working with YouTube is that they’re so helpful with all that back-end stuff, like reach. Last year’s Advent Calendar totaled 89 million unique views, which clarified the risk factor for this year’s radical shift in sensibility. But early returns have been promising. The first week had 11.6 million uniques, more than all of 2016 put together, and on track to match last year.

Grand admits there’s been the odd query on Instagram, someone wondering when Adriana Lima or Doutzen Kroes (it’s always them, she says) will show up naked. In the midst of last year’s controversy, Lima released a statement about her unwillingness to pose any longer for sexy videos on social media. It was construed by competitors as a reference to LOVE, even though Lima had never actually done anything like that in the years she and Grand have been working together. She does, in fact, appear in #movingLOVE later in the season, talking about beauty.

“I’ve never wanted to do a magazine that no one looked at,” says Grand, stating the obvious. “But I’ve launched five magazines now in my life and I don’t think it would be about launching another magazine if I didn’t do this. There’s more interesting ways to put content out there than printed pages, much as I love and respect that and the whole process of putting a magazine together.”

Grand accepts the challenge. “It’s obviously difficult educating a young audience about Kembra, April Ashley, Andie McDowell even. But people will find a way to them. And I want to know what they have to say. What will Finn Buchanan say? He’s 17, and he recognizes himself as a boy. Anita Bitton [who, with Greg Krelenstein, cast the project] found him at school in England for a trans story in W. This is the fourth project I’ve done with him.”

I take it back to those numbers, the millions who have already experienced #movingLOVE. There’s something inspiring about the possibility that Kembra Pfahler and April Ashley could galvanise as many eyeballs as Kendall Jenner and Gigi Hadid. There is heart and soul in the world…and an urgent hunger for the stories they shape. And fashion is not immune.