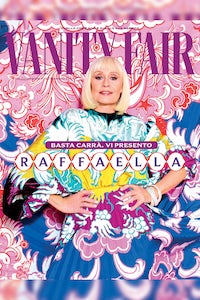 The former fashion director of La Repubblica — only about a month on the job — is already bursting with ideas about how to reach the Italian reader with exhibitions, performances and panel talks that bring the weekly magazine’s mix of fashion, entertainment and culture coverage to life in the physical world.

While some of his peers, including Vogue Italia’s new editor-in-chief Emanuele Farneti, are targeting a global audience, Marchetti described his strategy for Vanity Fair Italia as proudly Italian, and reflecting the cultural renaissance he sees reshaping Milan right now. The approach is designed to cultivate a local community who will hopefully show up for events that Condé Nast Italia is betting will drive up revenue in the face of declining print advertising, an increasingly common approach for media businesses.

Coming soon are public spaces at Condé Nast Italia’s headquarters where readers can meet one another and the creatives featured in the magazine. Marchetti said he wants the vibe to feel like MTV's Unplugged series from the 1990s. And that’s not including the art and design exhibits he plans to present throughout Milan. Some of are already underway, linked to the upcoming Milan Furniture Fair. He also plans to continue Vanity Fair Stories, a festival of panels launched in November.

“It is the natural evolution of our job,” said Marchetti on the launch of his first cover for the magazine. “I am not doing a new magazine, I am building a new network that has, inside, all the things that today are necessary for the editorial business.”

“[The title] is a medium to tell the story of made in Italy again,” he added.

Marchetti’s first issue hits newsstands in Italy on Wednesday and stars the legendary singer and entertainer Raffaella Carrà. She represents a respect for the past and enthusiasm for change that he wants Vanity Fair Italia to embody.

With an average circulation of 95,606 in print and 2.7 million followers on social media, Vanity Fair Italia is the regional publisher’s largest title and the most popular Vanity Fair after the English-language version. According to ComScore, monthly online traffic from Italy doubled between December 2017 and December 2018 to 3.3 million.

In 2018, Condé Nast Italia generated 69 percent of its revenue from print, 23 percent from digital and 8 percent from events. In fiscal 2017, the Italian division of Condé Nast International generated $117 million but ended the year down $1.1 million. (The prior year, it had a profit of $3 million.)

While the decline in print advertising has hit the American magazine market harder than Europe, the contraction has come to Europe, too.

Marchetti is the second new editor-in-chief for Vanity Fair Italia in two years. In early 2017, former editor-in-chief Daniela Hamaui succeeded Luca Dini, who led the title for 11 years. Dini is now the publisher’s editorial director across its portfolio of titles, which include Glamour, Vogue and a new online-only title for women, Lisa.

Marchetti says Vanity Fair Italia’s weekly publishing schedule makes the most sense for print in a digital age, and he hopes to focus it on delivering weekend reading that bundles the news of the moment in an accessible and open way, mixing high and low culture in the tradition of former American Vanity Fair editor Tina Brown. That means hiring illustrators from Instagram and featuring artists few people have heard of before, he said.

“We don’t have to close ourselves to our golden tower,” he said. “In Italy, we are living an era of populism and I can see the suffering of big newspapers because they are closing themselves into a very niche and snobbish explanation of reality.” He views the “simplification of complexity” as the opposite of that populist movement. "Philosophy can be very pop.”

Marchetti describes his strategy for Vanity Fair Italia as an “opera in three acts.” The first priority is online content, where he wants to publish exclusive songs, videos and content that will hopefully be newsworthy. “The goal is to become the center of the conversation in our country,” he said.

Next comes Wednesday's print issue, which he has redesigned with creative director Massimo Pitis to have a more collectible, independent magazine aesthetic. It’s an approach he said he’s learned from fashion brands like Gucci: just because something is intended for wide audiences doesn’t mean it shouldn’t have the sophistication of a niche product. And the third act represents his ambitions for events.

Marchetti is well-versed in the forces shaping fashion today, and he hopes to use style as a “language that penetrates all the magazine,” working with only young designers and young stylists. “I don’t want to talk about luxury, I want to talk about self-expression.”