PITTSBURGH, United States — For its first global advertising campaign, American Eagle isn’t relying on the typical teen-retail tropes to send its message. You won’t find fresh-faced, unreasonably tanned models running on the beach or palling around a campfire. Instead, the Pittsburgh-based company appears to be focusing on that uniquely millennial mix of individuality and collectivism, enlisting fashion industry cool-kids like photographer Cass Bird and stylist Sara Moonves to capture a cast of young influencers, from actress Hailee Steinfeld to musician Raury, in black-and-white portraits.

Each image is tagged with both #WeAllCan and a personal declaration. For instance, “Black-ish” actress Yara Shahidi chose the statement “I can be heard,” while YouTube personality Troye Sivan said, “I can love who I want.” The campaign stars are dressed in American Eagle denim and t-shirts, layering on jackets hand-painted with the American Eagle logo. (One hundred customised styles, priced at $99.95, are slated to be sold on AE.com starting September 8.) 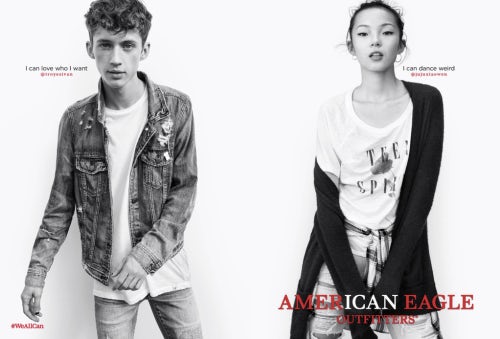 “So many brands market to this customer in a canned, pre-packaged way. It’s so inauthentic,” says Trey Laird, chief executive of the agency Laird+Partners, which developed the campaign in partnership with American Eagle. “We were trying to let these kids just be who they are. There’s this whole inclusive sort of vibe.”

For years, many “teen retailers” have failed to successfully connect with young shoppers as their consumption habits have been reshaped by fast fashion, e-commerce and, of course, social media. Many have filed for Chapter 11 bankruptcy protection, including Quicksilver in September 2015, Wet Seal in January 2015, Pacific Sunwear in April 2016 and Aeropostale in May 2016. Others have limped along, including Abercrombie & Fitch and Gap Inc.

American Eagle, by contrast, is enjoying its eighth consecutive quarter of revenue growth. In the second quarter of its 2016 fiscal year, the company reported net sales of $823 million, up 3 percent from $797 million during the same period last year. Sales at stores that have been open at least one year were also up 3 percent, with gross profits up 8 percent to $307 million. While sales at the company’s namesake brand inched up just 1 percent, business at Aerie — its standalone underwear line — is booming, up 24 percent during the quarter. Even with not-so-fast growth at the marquee brand, analysts were positive about the company's performance, especially compared to its competitors.

But none of the good news changes the underlying fact that American Eagle is a shopping mall brand. In fact, it operates 855 stores in traditional malls — out of a total 1,044 stores — and faces the major challenge of marketing its products to a new generation of customers that no longer buys into preppy logo t-shirts and play-it-safe jeans and sees social media, not malls, as the centre of their social life. Indeed, teens visited the mall an average 29 times a year in 2014, down 24 percent from 38 times in 2007, according to the Spring 2015 installment of Piper Jaffray’s biannual study on teen behaviour, which tracked 7,500 American teens with an average age of 16.4. And yet, American Eagle ranked the second most popular brand among the group in the Spring 2016 study — which this time tracked 6,500 teens with an average age of 16.5 years — surpassed only by Nike and outpacing fast-fashion favourite Forever 21, stalwart Ralph Lauren and Abercrombie sister brand Hollister.

It’s always been a very positive brand, very inclusive, very friendly and nice, but didn’t have an ownable image.

A change in management certainly seems to have given American Eagle a boost. In January 2014, after several quarters of declining sales, the company abruptly replaced chief executive Robert Hanson — who had been brought in less than two years earlier from Levi’s — with longtime chairman Jay Schottenstein, who owns a 9 percent stake in American Eagle. This was not Schottenstein’s first time running the company. (He was chief executive from 1992 until 2002.) Schottenstein’s re-installation was first a temporary fix, but in December 2015 his appointment was made permanent.

“I saw that everyone in the marketplace was discounting. I also saw that our product was not as good as it had it been in the past and it could be,” he says of why he and the board decided to make the move two years ago. Upon his arrival, Schottenstein installed former Urban Outfitters chief merchandising officer Chad Kessler as president of the American Eagle brand and continued to lean on Jennifer Foyle, who had led the Aerie business since 2010. “The number one agenda was to make the product right, the softness right, the washes right. That was our main goal in 2014.”

That meant moving away from trend-driven items, at which fast fashion competitors excel, and athletic wear, which requires a different kind of technological expertise. Instead, Schottenstein chose to buckle down on denim. "They were the first of those set of competitors to recognise that something they were doing was wrong," says Tiffany Hogan, a senior analyst at Kantar Retail. "Just recognising that they needed to change something about their business is what helped them to turn it around so quickly."

This strategy better fit into the wheelhouse of longtime creative director Roger Markfield, who, according to reports, had disagreements with Hanson on design direction. “Our core has always been a strong denim business. When I first got involved in the company back in 1991, 1992, we started developing our first American Eagle denim,” Schottenstein explains. “The goal in those days was that we wanted to be the destination store for denim. Today, we’re the number one brand for selling the most amount of units in the United States under one brand.” 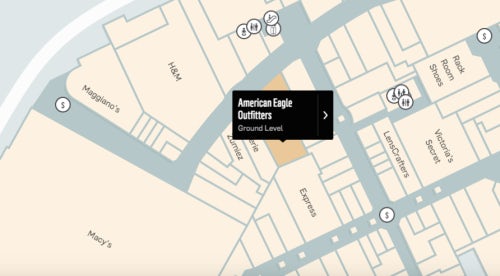 An American Eagle store opposite H&M at the Westfield Annapolis mall | Source: Westfield

Markfield retired in 2015 and was not replaced, but the strategy remains the same. And the bet on denim — and more broadly, bottoms — has paid off. “Fast fashion has been disruptive, but when we look at our brand, one of the few competitive advantages that protects us is the strength of our bottoms business,” Kessler says. “Fast fashion is a trend-driven, tops-driven business.” What's more, American Eagle — which plans on closing 150 stores by the end of 2016 — has strategically positioned itself in shopping centres anchored by fast-fashion competitors like H&M in order to feed off the traffic they generate. “Because there’s loyalty around the fit of [American Eagle’s bottoms], we use it as a moat or defense. The European fast-fashion players bring the traffic in, but the customer responds to our bottoms business.” It also helps that American Eagle’s offerings go up to a US size 20 (UK size 24), which most fast-fashion retailers do not.

The company has also recalibrated its approach to discounting. Instead of simply marking its entire inventory down by 40 percent, the company offers a “buy one, get one half-off” deal, for example, where the consumer receives a 50 percent discount when she purchases a second pair of jeans in a single order.

And while store closures are a big part of American Eagle’s strategy, the company has continued to open new outposts in less traditional spaces where foot traffic still rules. “We see an opportunity today to pick up some really high-profile locations, which will probably be announced shortly,” Schottenstein says. “We have Times Square, but these are comparable locations in other cities.” Indeed, while aligning stores within malls that have fast-fashion retailers as anchors is a good short-term strategy, the fate of many of those malls remain in question. "The market is overstored, there are just too many," Hogan says. "I wonder if having [about] 1,000 stores is the right number for the future." E-commerce, an increasingly large part of the business that will play a major role in the company’s international expansion, also brought in record profits in 2015. 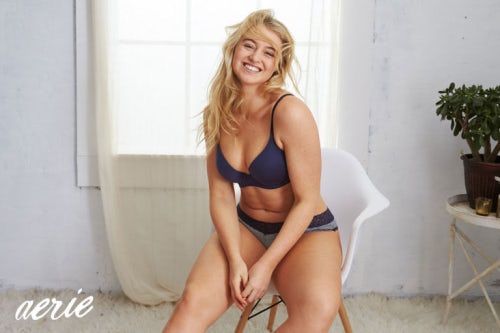 “I think it’s never just one thing,” Kessler says of the company’s multi-pronged strategy. “Which is a big part of the reason that we’re launching this campaign.” To be sure, Schottenstein, Kessler and co. have seen the success of Aerie’s un-retouched advertising campaign, #AerieReal, which was introduced in 2014 and has featured the likes of models Iskra Lawrence, Barbie Ferreira and actress Emma Roberts. According to Foyle, the success of the lingerie line is also thanks to the closure of unprofitable or brand-damaging stores, as well as the talent of senior vice president of design Andrea Jagaric, who was hired away from Victoria’s Secret in 2012. "It was combination of insight and luck to have the Aerie business," Hogan says. "The rise of the bralette got them in with the Old Navy and Victoria's Secret crowd. It was good timing." (Aerie has always been more casual and relaxed than its overtly sexy competitor, but Jagaric was particularly attuned to the bralette trend, which has usurped underwire bras in growth.)

“Marketing, product inspiration, design, stores — that’s really the difference,” Foyle says. “As we build our great product assortment, hopefully we’ll be able to continue to move this forward.” In 2015, comparable sales at Aerie increased 20 percent year-over-year. (Aerie accounted for about 9 percent, or roughly $317 million, of American Eagle’s more than $3.5 billion in net sales.)

This summer, American Eagle also installed Kyle Andrew, a veteran of Kate Spade New York who led the development of the Kate Spade Saturday brand, as its chief marketing officer. The hope is that Andrew, in collaboration with Laird, will be able to transform American Eagle into a truly global brand. As of July 30, 2016, the company owned and operated 98 stores in Canada, 25 in Mexico, nine in mainland China, six in Puerto Rico, six in Hong Kong and three in the United Kingdom, with 158 stores run by third-party operators in 23 countries.

“It’s always been a very positive brand, very inclusive, very friendly and nice, but didn’t have an ownable image,” Andrew says. “What we tried to do, going into it, is to [figure out] how to take something positive and inclusive and make it really desirable and engaging and really give it a voice.”

“You think it would be easier to communicate with the customer today than it was 25, 30 years ago, but it’s actually more difficult,” Schottenstein adds. “Today, people are so focused on channels, certain music, certain communities. You have to be more laser-focused.”