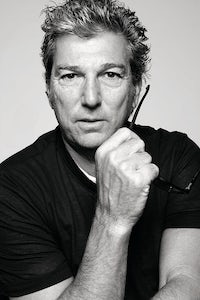 NEW YORK, United States — A quick survey of Theory’s Pre-Fall collection is all one needs to decode creative director Lisa Kulson’s vision for the brand. An open-back dress, cinched and tied at either side of the waist, works for the week worn under a blazer or for the weekend left on its own. Separates — like a black-and-white check peplum top, clay-coloured silk trousers and a ribbed minidress that doubles as a tunic — are equally versatile. In many ways, Kulson is revisiting the concepts she first explored when designing for Theory in the 1990s. That pared down mode of dressing is once again in favour — if not on the runways, then at least in the office. The clothes are cool, well made and have a certain universal appeal. But are they selling?

Theory chief executive Andrew Rosen re-hired Kulson as a consultant in 2012, when Belgian designer Olivier Theyskens was still at the helm of the workwear stalwart. Theyskens had been hired in 2010 to elevate the brand, repositioning it as ‘advanced contemporary’ in order to compete with the likes of Alexander Wang and 3.1 Phillip Lim, brands that brought a distinct aesthetic point of view to a category traditionally led by merchandising.

Before Theyskens, Theory was known for trousers and standard suiting. When the designer arrived, Theory’s signature became a split-neck blazer shown on a runway filled with forward-looking separates. Indeed, whereas the first generation of contemporary brands were largely product-driven — think Tory Burch’s Reva flats and Juicy Couture’s tracksuits — and more focused on celebrity placements than fashion industry credibility, the second wave was made up of designers that could hold their own amidst designer labels at New York Fashion Week. 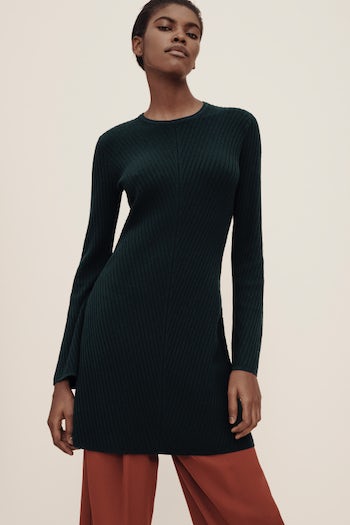 Trousers and a tunic from Theory's pre-fall 2015 lookbook | Source: Courtesy

Today, it seems, Theory is trying to be both high fashion and practical. Rosen believes Kulson, who replaced Theyskens in 2014, can achieve that mix. “I’m interested in making game-changing, heroic pieces. I want to make that piece of clothing that your wardrobe revolves around,” Rosen says. “That’s why I brought Lisa back. She understands fit, fabric, proportion and trend — and she knows how to meld all that together in a way that works for Theory.”

That may be true, but even if Kulson executes perfectly, she must shepherd the brand — which now generates close to $1 billion a year in global sales — through a fashion landscape that is challenging at every level. In the middle of the market, where Theory lives, competition is particularly fierce and the fight against both fast fashion and rampant discounting is never ending.

“There are so many choices today,” says Dana Telsey, chief executive of Telsey Advisory Group, an equity research and consulting firm focused on retail. “Women used to buy clothing for work, gym, weekend and party and now there is a consolidation of those situations. We’re seeing cosmetics do well, activewear do well. The ability to drive newness and product innovation is key.” What’s more, “Price has become even more important. The Bergdorf Goodman shopper is [still] waiting to buy things on sale.”

The contemporary market may be the most sensitive to the shift in consumer attitudes, mostly because it relies on wholesale partnerships more than the high and low ends of the market. Theory's parent company Fast Retailing does not break out results for the brand, but at Vince, a competitor, net sales for the third quarter of the 2015 fiscal year plunged 21.5 percent to $80.9 million, down from $102.9 million in the third quarter of fiscal 2014."We saw continued challenges in the wholesale channel and less traffic in our direct-to-consumer business, along with deeper discounts, which is consistent with what we are seeing in the overall retail environment," Vince's chief executive Brendan Hoffman said in a statement. (While direct-to-consumer sales were actually up 1.3 percent to $24.4 million, wholesale shrunk by 28.4 percent to $56.5 million.)

Rosen, who founded Theory in 1997, is credited with creating the contemporary market alongside Marc by Marc Jacobs, which launched in 2001. Before that, the category was called “bridge” and mostly consisted of watered-down versions of designer fashion. In 1997, the same year Theory hit the sales floor, a New York Times article quoted several prominent retailers on the decline of bridge. “The bridge business is significantly worse than a year ago and significantly worse than two years ago,'' Hugh ‘Butch’ Mullins, then-executive vice president of Neiman Marcus, told the paper. “There's a sameness of the product. There isn't the differentiation that there is in the designer market.”

As with bridge, Kulson and her team are distilling obvious trends. But unlike bridge, contemporary product is released almost monthly and therefore ends up being discounted more frequently than higher-end product that’s delivered only two to four times per year. What’s more, today’s aspirational customer is more sophisticated than she was two decades ago, much in thanks to the high standards set by designer-led ready-to-wear and contemporary brands. Fast fashion, which offers on-trend items for cheap, has also grabbed significant market share. Mid-priced brands can no longer win on quality, either, as the market is full of direct-to-consumer brands selling quality goods at a fraction of the price they would need to charge if they were distributing via wholesale.

While there are plenty of brands thriving in the mid-market — Self Portrait, Tibi and Ulla Johnson come to mind — major changes within the contemporary category point to a market in flux. Marc Jacobs, Dolce & Gabbana and others have rolled their contemporary-priced “diffusion” lines into their main collections, opting to sell and distribute products with a wide range of price points under one umbrella brand. Designer Chitose Abe suspended her secondary line, Sacai Luck, in order to extend the breadth of her main line with pre-collections.

Arguably, no one has more skin in the contemporary game than Rosen, who is the chief executive not only of Theory, but Helmut Lang as well, which is also owned by Link Theory Holdings, a division of Fast Retailing. Additionally, Rosen is an investor in several New York-based brands — including Rag & Bone and Alice + Olivia — all of which live on the contemporary floor of a department store.

“Business is tough,” Rosen admits. “But there is also an immense amount of opportunities.” One such opportunity he sees is reconfiguring the relationship between brand and store. “Clearly, one of the things that has dramatically changed our industry is vertical retailing. Today, it’s even more dynamic than it used to be because I don’t need a retailer, I don’t need a magazine, I don’t really need anyone to reach my consumer. I can reach [her or him] directly myself,” he says. For instance, Theory can distribute images from its David Sims-shot advertising campaign via its Instagram account and communicate the Theory lifestyle through the mix of products in its own stores.

Indeed, the power of a wholesale partner like a department store — where most contemporary brands do the majority of their business — is waning. Sales at American department stores in particular are troubling. The Neiman Marcus Group, for instance, saw sales at stores open for at least one year drop 5.6 percent in the company's first fiscal quarter of 2016, which included the typically robust holiday season. Macy’s comparable store sales declined 5.2 percent during the months of November and December combined. Meanwhile, Saks Fifth Avenue saw same-store sales slide 3.6 percent in the quarter ending October 31, 2015. But as contemporary brands open their own stores, in the vein of luxury retailers, driving consumers through their front doors, without the appeal of brands as powerful or alluring as their designer couterparts, is no easy feat.

Rosen, for one, believes that the traditional modes of reaching the consumer are still valuable. “I’m not saying I don’t believe in magazines and retailers. I believe in all of that. I just think that they need to be re-imagined.” To do that, Rosen says retailers and brands must work together as if they were vertically integrated. “It can’t be a third-party concept anymore,” he says. “We need to both be invested in the outcome, not trading with the other.”

One thing that many vertically integrated brands share — from Louis Vuitton to Warby Parker — is minimal use of discounting. Right now, wholesale brands are being gouged by seasonal markdowns at department stores, their already thin margins thinned even further. Why not go direct? What Rosen believes retail and traditional media can still offer, especially for a younger brand, is credibility. “Having an influential retailer or magazine authenticate what you’re doing is important,” he says. “You need the credibility that the old methodology gives you unless you have unlimited amounts of money. If you have unlimited amounts of money, you can go do whatever you want.”

As for whether the contemporary market is worse off than others, Rosen won’t agree to that. “The contemporary marketplace isn’t the only thing changing. The whole fashion industry is changing,” Rosen says. “The technology revolution has moved faster than the actual business platforms in many industries and our industry especially. If you create a culture and are able to execute a very strong aesthetic and to be authentic to that, then I think you can be successful.”

To help to reshape the culture at Theory, Rosen has been hosting town hall-style meetings. “I want to get our people to start thinking in a different way. Have we changed our method of doing business?” he asks. “Have we changed our design and manufacturing and retail platform as much as the world has changed? The answer is no.”

While Rosen offered little in the way of specifics, there are plenty of old fashioned practices plaguing the industry as a whole, from the misalingment of fashion's media and retail cycles to its sprawling supply chain. And, indeed, much like other industries being disrupted, by new technology — from transport (Uber), to hair salons (DryBar) — fashion retail is ripe for a revolution. It’s perhaps no surprise that Rosen is a founding partner in the CFDA Fashion Manufacturing Initiative, an investment fund that helps local New York manufacturers upgrade their technology.

The biggest shift, however, may be in the way we consume. “It’s not just what bag you wear or what watch you own, your currency is wrapped up in where you’ve been, what you do, how you do it. Your Instagram is also currency,” he says. “But many industries have been disrupted before us. This is the beginning of a new opportunity — not the end. But if we try to do business the way we did 10 years ago, we have no chance.”