The company is betting on e-commerce and a better product assortment to turn its fortunes around.

The company is betting on e-commerce and a better product assortment to turn its fortunes around.

It’s not hard to see why Express attracted Reddit’s attention. The brand is one of dozens of ailing American chains that rely on shopping malls for customers, a losing strategy even before Covid-19. Work clothes, one of the brand’s former core categories, gathered dust on the rack during the pandemic. Operating losses more than doubled to $455 million in 2020. At the start of this year, the retailer’s problems piqued the interest of “memestock” traders, who bid up shares of it and other struggling companies.

Chief executive Tim Baxter, who joined Express two years ago, said the company is already on the path to recovery. The first step, he said, was to sell better clothes.

“The product was bad,” Baxter told BoF, looking back on his first impression of the brand in 2019. “One of the first things I knew we needed to do is really clearly define the brand and give the brand a purpose,” he added.

Baxter, the former chief merchandising officer at Macy’s, said he’s more confident in the assortment offered today, which is big on denim and other staples that can be worn for both work and for a night out. A satin slip dress and a pair of jeans both cost around $90 at full retail price, though they can often be found on sale.

Express needed to design clothes people actually want to buy. It also required a new strategy to sell them, one less reliant on malls. The retailer has set a target of growing annual digital sales to $1 billion by 2024. The brand does not break out online revenue, but likely has a ways to go: in 2018, e-commerce represented 29 percent of its $2.1 billion in net sales. This year, analysts are predicting overall sales of roughly $1.9 billion.

There has been progress, and Baxter said this week that Express is on track to hit its e-commerce target. On Wednesday, the company reported online demand was up 20 percent in the three months ending July 31 compared with the same period in 2019. Overall revenue for the quarter was up 86 percent compared to the second quarter of 2020, totalling $458 million. Earnings before income, taxes, depreciation and amortisation increased $149 million, now in the black, to $31 million.

Express shares plunged nearly 12 percent after the results came out, though they are still up nearly 600 percent this year.

“Among investors, I think there’s caution, there’s concern that this [growth] just isn’t going to last,” said Gabriella Santaniello, a retail analyst who follows malls and founder of retail consulting firm A Line Partners. “I don’t think it will be as easy as [Express] thinks.”

With the onslaught of social media-savvy, digital native retailers such as Revolve, Asos and Boohoo Group, it’s harder than ever for mall staples like Express to compete. The biggest hurdle, Santaniello said, is erasing the image of staleness and creating a new, exciting identity.

“They’re going to need a much more radical revamp,” she said. “So far, I’ve barely noticed it.”

They’re going to need a much more radical revamp.

To spread the word about its new look, Express is recruiting “style editors” — customers who can earn commissions by promoting their own curation of the brand’s products online. A marketing campaign tapped TikTok influencers to share their tips on gaining confidence. Express’ newly updated website incorporates user-generated content on product pages.

Behind the scenes, Baxter gutted the merchandising department, which on his arrival was split across four divisions, each operating independently to stock clothes for work, casual dressing, special occasions as well as denim. Stores were also designed around these four categories.

“That simply isn’t the way people dress anymore,” he said.

He brought in a new head merchandiser, Malissa Akay, a veteran of Lane Bryant and Ralph Lauren. Now, there will be just one womenswear team (as well as a menswear team), with denim will be the foundation of every collection. Popular garments under this new merchandising system include knitwear, bodysuits and of course, jeans. 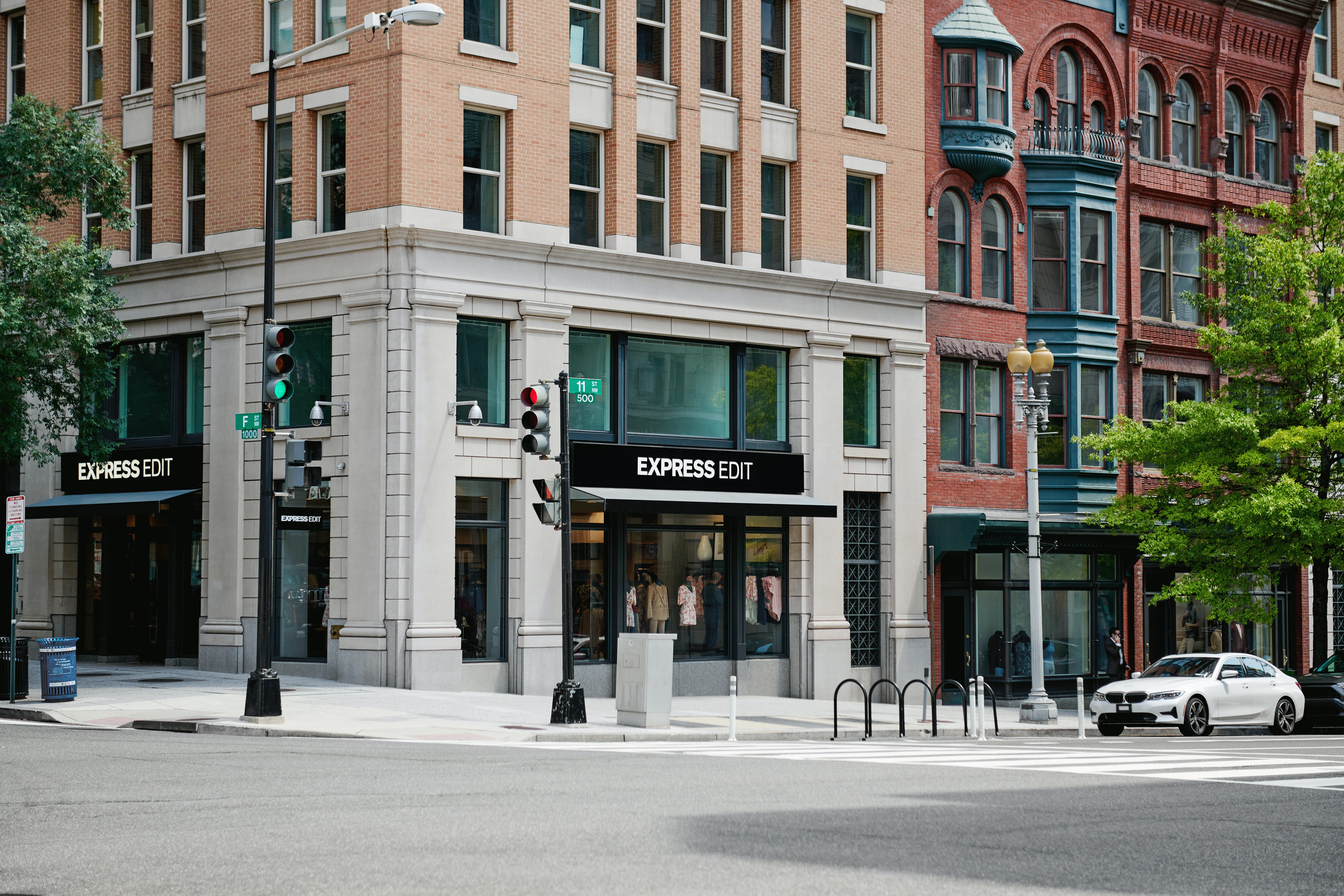 The consolidation also helped cut costs. In early 2020, the company committed to reducing costs by $80 million within three years. The retailer closed 81 stores since early 2019, with 566 open as of July. That count includes four smaller format locations that opened this year, called Express Edit concept stores. Two-thirds of Express’ locations are up for lease renegotiation over the next three years, Baxter said, which means the company will have the opportunity to change and remodel the majority of its footprint.

Customers can also now pick up online orders in stores, and in the future, will be able to filter the website by local store inventory, said Brian Seewald, senior vice president of e-commerce.

So far, a new digital marketing strategy, too, has yielded higher organic engagement rates, or the amount of interaction social content earns, by 10 percent on Instagram and 80 percent on Facebook in the second quarter compared to the same period in 2019, according to the company. This is largely thanks to Express’ new focus on user-generated content and continued investment toward influencer marketing — a strategy that seems to be taken straight out of Revolve’s playbook, Santaniello noted.

“The products look great, influencers are what customers look to these days … and the [Style Editor] commission programme is very innovative,” she said. But the question remains whether Express can build momentum from its rosy second-quarter earnings, she added, and whether it can maintain growth even after this summer’s post-lockdown boom in travel and overall retail spend.

Still, Baxter sees his progress as a stark contrast to what customers were offered just three years ago.

“In 2018, you would’ve seen commodified items offered at sale and discounted prices,” he said. “What you would see now is a lifestyle approach of fantastic products that can be mixed and matched in many different ways.”

As of Wednesday afternoon though, visitors to Express.com will see a glaring red banner at the top of the site, promoting a sale with “styles from $10,” tonight only.