The sportswear giant's large-scale partnership with Silicon Valley manufacturing company Flex, established in 2015 to accelerate product deliveries by shifting the manufacturing of certain categories of customised goods closer to the United States and away from its large and longstanding supply chain in Asia, collapsed.

The partnership was an expensive investment on both sides and included a 57,000 square-foot, $100 million-plus factory near Guadalajara, Mexico, built by Flex, which had never before made shoes.

According to sources familiar with the Flex business, Nike and Flex were unable to get manufacturing costs close enough to what they are in Asia, which meant further investment was required. Pressure from Nike on Flex to pour more money into the project caused the manufacturer to rethink the partnership, as it could no longer justify the losses.

“The company has worked hard with Nike to make the footwear manufacturing operations in Mexico technically and commercially successful,” read a statement issued by Flex. “In recent weeks, however, it became clear that the company would be unable to reach a commercially viable solution.”

Flex said it would stop production for Nike by the end of 2018, citing over $30 million in exit costs for the manufacturer. (The facility will be repurposed, but it’s unlikely that Flex will continue making shoes.)

Shares of Flex tumbled on the news, which came around the same time as the retirement of the company's long-time chief executive, Mike McNamara, and soon after the departure of consumer technologies group president, Mike Dennison, who left over the summer.

“I think some were disappointed that Flex and Nike ended their relationship — it was a surprise to a lot of people,” said John Kernan, a research analyst at Cowen & Co. “The more you want to customise, the more your manufacturing has to move closer to the consumer.”

It wasn’t the first time the American sportswear giant had tried and failed to shift some of its manufacturing to Mexico. News that the company was first considering manufacturing in the country after having moved the majority of its manufacturing to Asia in the 1980s, came in 1995. While Nike now manufactures in 41 countries, a previous effort to tap Mexican factories at scale in the early 2000s was halted around 2005. Nike did not respond to a request for comment regarding this matter.

A source familiar with the Flex and Nike partnership said that Nike’s next step will be to partner with some of its Asian manufacturers to open facilities in Mexico, given how important localisation is to the success of the overall strategy. (Sales in North America generated more than 43 percent of its Nike brand revenue in fiscal 2018.) A representative for Nike would not confirm this, but said the the company remains committed to close-to-market manufacturing.

Nike has already begun to apply processes it established with Flex across its supply chain, deploying more than 1,200 automation machines, digitising certain steps and increasingly using robots. And its "express lane" system — which has cut the design-to-market time down significantly for many products — ensures there are new products available in-store every couple of weeks.

But the end of the Flex relationship also marked the end of a challenging year for Nike. The company suffered a string of senior executive departures following reports of a workplace culture deemed “toxic” for women and is still grappling with how to digest the benefits and blowback of a highly political, highly successful advertising campaign featuring NFL star-turned-activist Colin Kaepernick. But despite the multiple setbacks and the distractions, Nike’s direct-to-consumer strategy appears to be working.

Nike is certainly not the only brand focusing more of its attention on direct in a bid for better margins and more control over brand experience. Coach, Michael Kors and Ralph Lauren have made similar, if less sweeping, moves in order to decouple themselves from damaging wholesale relationships and focus on direct-to-consumer channels.

“Barely a quarter goes by that I don’t speak with at least one brand executive awakening to the reality that the reach, ubiquity and market penetration that hyper-retailers, department stores and discounters once offered is now the very thing that is siphoning equity from their precious trademarks,” retail futurist Doug Stephens wrote in 2017.

Nike’s effort, however, is highly ambitious. In late 2017, underscoring the importance of its pivot to direct sales channels, Nike chief executive Mark Parker said the brand would refocus its wholesale strategy on just 40 partners — those willing and able to build out unique Nike spaces within their store environments — out of 30,000 total distributors.

And Nike has made serious headway. “Their execution is excellent: they have innovation and newness in the assortment in the stores as well as in the experience,” said retail analyst Jane Hali. “The fear that we always had was that the other retailers — such as Footlocker — would have difficulty getting the best styles. We find that not to be the case, that they are good partners with Footlocker, with Dick’s Sporting Goods. We found good product in both... everyone is benefiting.” 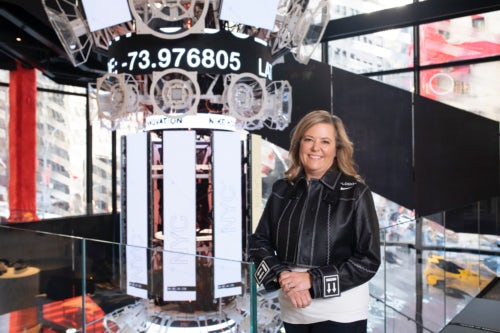 Central to its progress is what many other brands talk about but aren’t even close to achieving: a one-to-one relationship with the customer. Heidi O'Neill, recently named president of Nike Direct, and Adam Sussman, general manager of Nike Direct digital and geographies, have managed to take two typically siloed areas of the business — digital and physical retail — and integrate them, helping to work toward the goal of a single customer profile of every person enrolled in its NikePlus membership programme. For example, if you're a NikePlus member living in New York and usually shop online but find yourself on the other side of the world — say, at the brand's new flagship in Shanghai — salespeople can see your account details and personal preferences and help tailor your experience accordingly.

Previously, Sussman’s title was chief digital officer, while O'Neill was president of direct-to-consumer, meaning that she oversaw direct retail and e-commerce. But over the past two years, their teams have become increasingly intertwined, as everything Sussman was overseeing — digital products, experiences, services and platforms — has seeped into every part of the business. (Sussman now reports to O’Neill.)

“Adam and I have always felt that there’s a bit of magic in how our teams have come together,” O’Neill said in an interview before the opening of Nike’s 68,000-square-foot 5th Avenue flagship. (They call the six-storey space, its floors covered in terrazzo stone spiked with florescent shards of recycled Nike footwear, “House of Innovation 000.”) “I see a time in the future when we don’t talk about channels. Consumers are very fluid from physical to digital.”

Plenty of retail executives serve up similar lines, but Nike is investing heavily in the concept. In the most recent quarter alone, the company spent $2.1 billion on overhead expenditures — which includes marketing and opening new stores — driven in large part by investments in the Nike Direct business.

Some of the investment has gone into NikePlus. The initiative, launched first in 2016, has thus far attracted 140 million sign ups. Nike declined to disclose how many of these were active users, but those that are participating theoretically have plenty to keep them occupied, including performance-based contests, in-app experiences like guided workouts and meditations, contests, app-only styles and personalised promotions.

Some of the benefits of membership come to life at physical retail. At Nike by Melrose, a 4,500-square-foot store named after its West Hollywood address, there is curb-side pickup, playing to LA’s car culture. At the new Fifth Avenue flagship, users can pay with their app at self-help stations stocked with bags throughout the store, scan QR codes on mannequins to browse and try on items, and schedule personal shopping appointments. 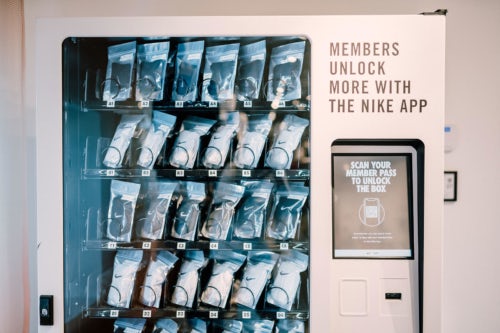 The vending machine in Nike by Melrose in West Hollywood | Photo: Courtesy

Another neat little trick: At Nike by Melrose, there’s a vending machine stocked with branded crew socks, yours for the taking with the scan of a barcode. All NikePlus members have to do is open an app, hold it up to the digital display and a pair comes tumbling out.

While people love free stuff, how much all of this helps to drive the bottom line is unknown. Nike declined to disclose specific sales performance data related to its membership programmes. (Earnings in the most recent fiscal quarter were up at $0.52 per share, a 13 percent increase, appeasing owners of the stock.)

However, these services certainly spur deeper customer engagement and build a sense of belonging and community around the Nike brand. Then there’s the reams of consumer data, which it uses to inform and target new products and experiences, which Nike is increasingly localising for customers in key global cities, from New York, London and Paris to Shanghai, Beijing and Tokyo. In New York, for example, a “speed shop” — featuring the products most popular with locals — allows Manhattanites to whiz in and out when they need to.

We're not just building things because our gut tells us to build them.

“Personalisation and localisation are key for 2019 and beyond,” Hali said, “but the one pushback you get from investors is the cost structure; that Nike is investing so much.”

“We're not just building things because our gut tells us to build them,” countered Sussman. “We have an incredibly disciplined approach that is very data-driven and metrics-driven. We're not always right, but we test and we learn.”

Nike has also evolved the way it measures success. Instead of simply looking at impressions and conversions, the company now evaluates active membership, members who purchase and predicted lifetime customer value to determine whether or not its efforts are paying off. In March, it acquired Zodiac, a data analytics firm, to help with the effort. “Applying a digital operating model to a retail model has transformed how we manage the business,” Sussman said.

Nike.com’s average order size may have only averaged just north of $167 in 2018, according to credit card tracking firm Second Measure, but what the brand is delivering on a service level surpasses the offerings of many luxury retailers. Investing in pampering the customer cajoles them to provide more information, deepening the relationship. 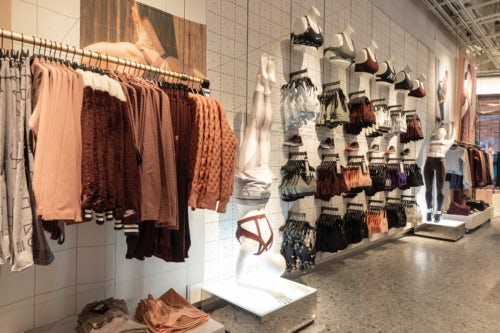 But while there's evidence that Nike's offensive push on direct-to-consumer may be working — sales in once-lagging categories, like its women's and casual wear businesses, are growing more quickly on top of the overall lift — competitors like Adidas continue to gain ground. (In the third quarter of its 2018 fiscal year, Adidas' North American sales were up 16 percent.)

For O’Neill, remaining close — physically and emotionally — is at the very heart of the “dance” between Nike and the consumer that unlocks long-term sales performance. “We’ve always known we’re here for the customers, and now it’s an even more virtuous circle,” she said. “The more consumers engage physically and digitally, the better we can serve.”