Peloton’s success in fitness has Nike, Lululemon and Adidas lining up to make clothes for its loyal riders. Will those followers be as loyal to the exercise bike maker’s own gear?

Peloton’s success in fitness has Nike, Lululemon and Adidas lining up to make clothes for its loyal riders. Will those followers be as loyal to the exercise bike maker’s own gear?

Four years later, the 41-year-old mother of two has lost over 100 pounds — and gained drawers of Peloton-branded clothes, which she wears both on and off the bike.

“The thought of $90 leggings used to be crazy to me,” Snowden said with a laugh. “But I take great pride in the impact Peloton’s had on my fitness and wellness level. The clothes make me feel good.”

Peloton started selling its stationary bike in 2013 and now has almost 1.7 million paid subscribers. Business boomed during the pandemic and the company surpassed $1 billion in quarterly sales at the end of 2020.

Most of those sales came from equipment; its treadmills can cost as much as $4,000. But a growing number of devoted subscribers like Snowden are buying the company’s branded apparel as well. Peloton has been selling clothes since the very beginning, but sales really started to boom once it began stamping its logo on fitness gear from popular brands like Nike, Lululemon and, most recently, Adidas. The company doesn’t break out apparel sales, but in October, chief executive John Foley said at a conference that Peloton had sold 600,000 pieces of branded clothing that quarter alone.

I take great pride in the impact Peloton’s had on my fitness and wellness level. The clothes make me feel good.

Analysts say clothing has been a loss-leader for Peloton, a way to reward loyal customers (users get a $100 credit to the apparel store if they convince others to subscribe). But the company has bigger ambitions, including turning its own label into a fitness brand that competes head-on with the sportswear labels it has collaborated with.

“We plan to have the best fit, the best fabric and the best price,” Jill Foley, Peloton’s vice president of apparel, and wife of John Foley, told BoF.

Peloton is still a tiny player in the activewear market. But it has something every fashion brand wants: an enthusiastic, fiercely loyal community of customers. Peloton users willingly spend thousands of dollars on the bike and $39 a month for classes with their favourite instructors. Many will happily splurge on branded apparel to feel even more like part of the team. The company is seen by many customers as approachable for a high-end brand, thanks to its extended sizes and diverse group of instructors who regularly tell riders that anyone can join their fit lifestyle community.

Still, exclusivity remains at the heart of Peloton’s appeal: someone who wears the signature “P” on their leggings is signalling they own a bike that comes with a four-figure price tag and a months-long waiting list.

“It’s about the clothing but it’s also signalling you have money,” said Natalia Petrzela, an associate history professor at The New School who studies the culture of the American fitness industry. “The elite brand is also a big part of what they are selling.”

Danielle Verwey, a Peloton user of three years who lives in Philadelphia, said Facebook groups will often ride together wearing matching outfits and share photos to social media. For these shoppers, Nike or Lululemon apparel is more appealing if it’s Peloton-branded. 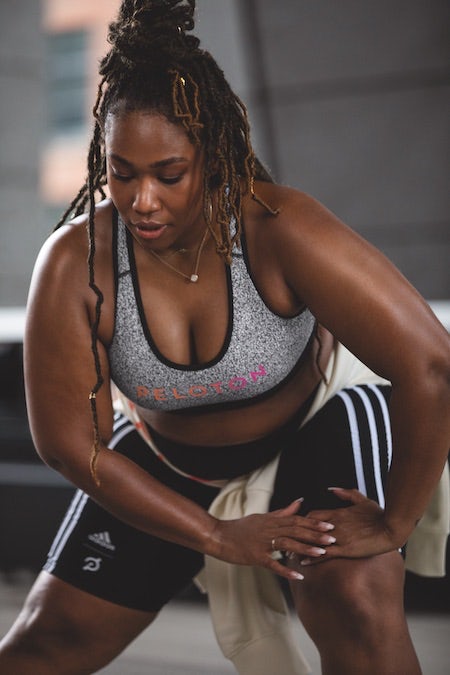 A look from the latest Adidas collection for Peloton.

“Wearing the clothes is a sense of being one,” said Verwey. “Something new comes out, and everyone wants to buy it so that you can all wear it together.”

The company has spent years nurturing a sprawling network of dozens, perhaps hundreds, of Facebook groups, from Average Peloton Moms and Peloton Dads to Peloton Riders for Christ and Peloton IVF Warriors. The company actively moderates some groups and monitors many more, collecting data on members’ preferences — including fashion.

“It’s gold for the apparel business,” Jill Foley said. “We watch the Facebook pages and get so much information about what they love, what criticism they have and take that feedback.”

Foley said tank top sales at Peloton have been down in recent months, for example, and the company saw via Facebook chatter that women are now buying matching bra and leggings sets because it’s what Peloton instructors wear.

Peloton promotes its clothing in Facebook groups and also allows Facebook users to give input. It consulted the Double XL Tribe Facebook group, for example, when it debuted inclusive sizing a few years back (clothes go up to a size 3XL).

Members like Snowden appreciate that Peloton makes its digital community a priority.

“We’re upwardly mobile and high-achieving African American women who are at the top of the game in our professions and Peloton tries really hard to see us,” she said.

Peloton is better known for its collaborations than its own apparel, to the point where its website has evolved into a fitness department store, said Jessica Ramirez, a retail analyst with Jane Hali & Associates.

“When stores closed [during the pandemic], brands had to find other successful channels,” said Ramirez. “You want to be where the people are, and they are on Peloton.”

Brands that have worked with Peloton have seen its influence. Lululemon makes more traditional styles for Peloton, like its high-rise leggings and biker shorts in one or two different colours, while the most recent collection from Adidas includes wild-patterned leggings and neon loungewear.

We’re upwardly mobile and high-achieving African American women who are at the top of the game in our professions and Peloton tries really hard to see us.

“I don’t know if I’ve ever seen our styles last longer than seven or eight weeks on the site because everything sells out,” said Erin Hawley, the vice president of sales at Spiritual Gangster, which makes clothes for Peloton. “We joke that it’s the Supreme of fitness.”

These brands aren’t just trying to get in front of the millions of avid Peloton users. They also want to know how they do what they do.

“We are humble, we don’t know everything and we want to partner with people to learn and grow,” said Kate Ridley, senior vice president of brand at Adidas. “We want to know more about consumers.”

Foley said Peloton intends to eventually bring all of its production in-house.

“We’re getting focused on making our own goods and not depending on partnerships because vertical integration allows us to have more control and get better prices,” she said. “The goal is to just be making our own stuff.”

The company staffed up its production team this year to begin designing its own fabrics. That will put it in competition with apparel giants like Lululemon and Nike, though it will be difficult for Peloton to devote similar resources to research and development, analysts say.

“Nike has a lab that engineers and tests every legging and sports bra. Is it actually worth it for Peloton to compete with such premiere product?” said Petrzela. “It would take a significant investment into apparel research and that is a pivot from their current business.”

Peloton may struggle to attract as many customers to its store if it isn’t stocking Lululemon or Nike, said Simeon Siegel, an analyst at BMO Capital Markets.

“I think a lot of people are buying Lululemon with an added Peloton stamp because they know it’s a great product,” he said. “The brand has yet to show its own staying power.”

Then again, Peloton has an ever-growing number of users who have demonstrated they’ll spend whatever it takes to be a part of the brand.

“If Peloton sells their stuff, I trust it,” said Robyn Redfern Williams, an employee at the US Department of Treasury and Peloton user since 2017.

How to Win the Pandemic’s Activewear Boom