The L Catterton-backed label was six months into a global expansion when the pandemic hit. But it is steaming ahead with plans for a number of new global stores, starting with a King’s Road location in London’s Chelsea neighbourhood.

The L Catterton-backed label was six months into a global expansion when the pandemic hit. But it is steaming ahead with plans for a number of new global stores, starting with a King’s Road location in London’s Chelsea neighbourhood.

When the pandemic hit last March, Ganni was six months into a major international expansion. It’s barely skipped a beat.

The label, which gained cult status via Instagram for its Scandi “cool girl” style and attracted the backing of private equity firm L Catterton in 2017, opened five new stand-alone stores last year. As retail reopens in the UK after a months-long lockdown on Monday, a new Ganni location on London’s Kings Road is also preparing to open its doors for the first time. Another three openings are planned this year in Oslo, New York and Paris.

It’s a bullish plan in a fragile retail environment, but Ganni’s business has proved relatively resilient. Revenue reached €76 million ($90 million) in 2020, up 1.3 percent year-on-year. That’s a significant slow down compared to the company’s 50 percent average growth rate for the three years prior to 2019, but substantially outperforms the broader footwear and apparel market, which contracted 17 percent in 2020, according to Euromonitor International.

Now Ganni’s targeting a return to fast growth, betting on the continued support of its loyal following and its skill in building community to boost sales a forecast 30 percent this year.

Success depends on staying ahead of challenging retail trends and economic headwinds. 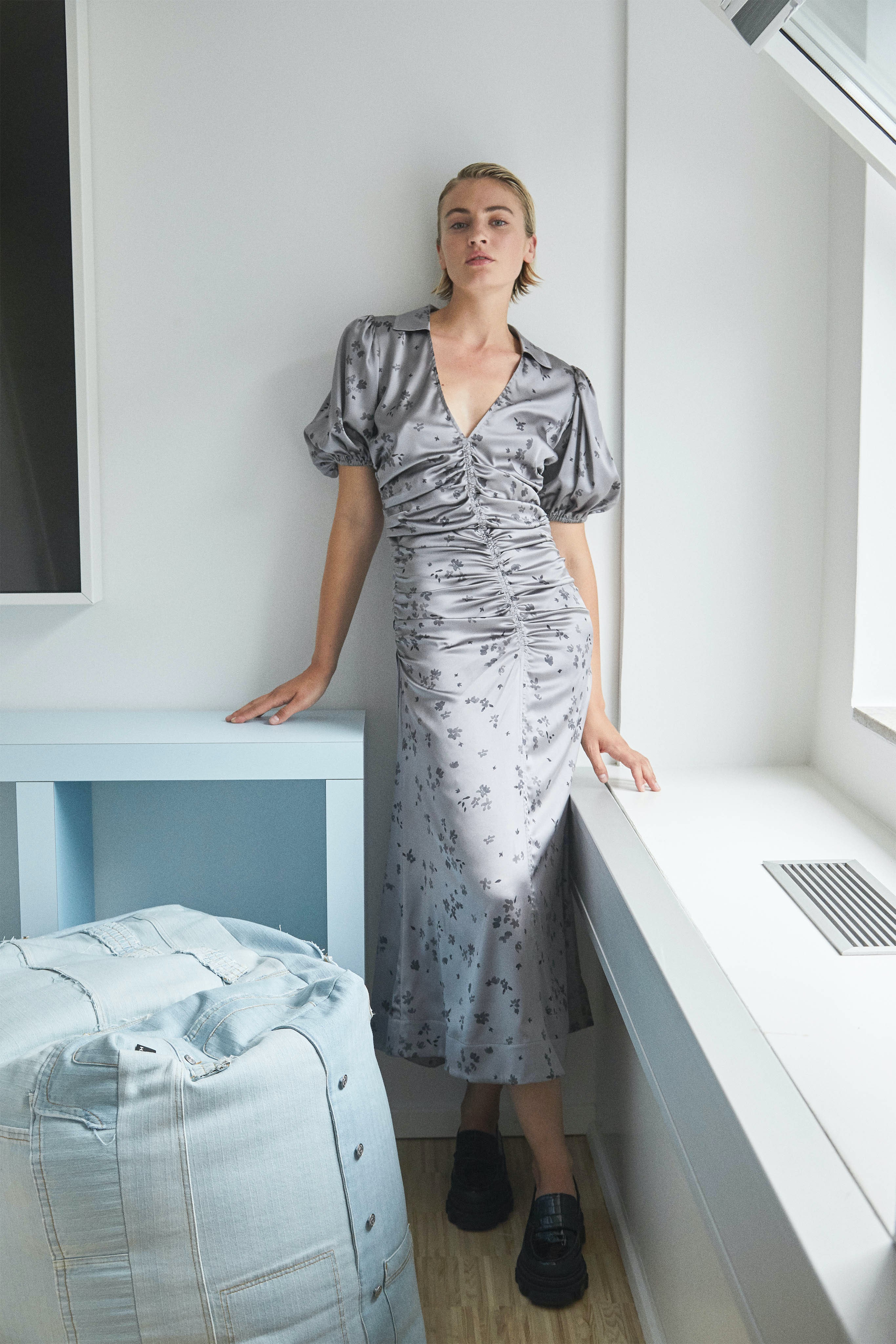 The company sits in a market segment that typically struggles during economic downturns. Price-wise, contemporary fashion ranks below expensive “designer” labels but above fast fashion and High Street brands. During a downturn, affluent shoppers tend to gravitate towards more special, luxury purchases, while middle-class shoppers may cut back on spending or gravitate to more value-driven offerings — leaving the middle to feel the squeeze. Fifty-five percent of fashion executives expect the mid-market segment to be worse off this year compared to 2020, according to a survey conducted by BoF in partnership with McKinsey for the State of Fashion 2021 report. By comparison, only 41 and 39 percent said the same of the value and luxury segments.

Some competitors are already struggling. At French contemporary group SMCP, which owns brands including Sandro, Maje and Claudie Pierlot, sales fell 23 percent to €873 million for the year ending March 2021. This month, The Collected Group Company, which owns labels Equipment, Current/Elliott and Joie, filed for bankruptcy protection.

Meanwhile, the physical retail landscape remains uncertain at best. In the short term, the unpredictable nature of the virus will continue to disrupt in-person shopping — while the UK and parts of the US are currently easing lockdowns, other countries like France and Italy are tightening restrictions. Longer term, it’s unclear how long it will take for in-store footfall to recover after the pandemic.

“I don’t see people going back fully to how they were shopping before,” Mintel retail analyst Chana Baram said. “People that were maybe a little bit hesitant to do online shopping for everything before now see that actually it’s worked out quite well.”

Underpinning Ganni’s growth ambitions is a bet on a modern approach to old-school retail.

The company’s original success leant heavily on the rise of social media and community-based marketing; now it wants to use all the data it’s gathered about its fan-base through digital channels and wholesale partnerships to drive its retail strategy.

“There was a period when retailers would just say, ‘We’re going to grow our store portfolio by this amount,’ and people were just opening shops left right and centre, that was seen as their growth strategy to show that they were doing well,” she said. This approach was already under pressure before the pandemic — Covid-19 lockdowns only exacerbated problems.

Ganni’s new stores are intended to cater to its most highly engaged customers: those that know the brand well and have shopped there for a long time, rather than those that buy a trending product they saw in an Instagram ad. In 2021, that means focusing on neighbourhoods near to where the customer lives, whether that be Le Marais in Paris, Brooklyn in New York, or Chelsea’s King’s Road in London.

“The retail store is the last point where you actually can solidify the connection that you have already built through wholesale and through DTC [online],” said Ganni chief executive Andrea Baldo. “We open the store when we have seen that there is traction from our community.”

To keep shoppers engaged, retail staff emphasise personalised service and storytelling that plays up sustainable elements of the brand’s collections, while different markets sell one-off collaborations relevant to local tastes. For example, the brand teamed up with LA-based candlemaker Boy Smells on a candle collab sold in its US stores.

“The narrative is going to be super important,” said Baldo. “That is how we are going to drive traffic, it’s by having this continuous newness in interesting things that happen [at] the store level to actually drive traffic of repeat customers.”

The narrative is going to be super important. That is how we are going to drive traffic.

Baldo said it’s a strategy that proved its worth during the pandemic. When stores were allowed to reopen in Denmark and Norway last summer, Ganni boutiques saw record in-store sales in the region. The US has also emerged as a key growth market for the brand. Ganni is expecting the region to account for 21 percent of total sales by the end of the year. North America accounted for 13 percent of sales in 2018, the year before Ganni opened its first US store.

Next up, Ganni is looking to build up its direct operations in the lucrative China market, where the label has seen sales at wholesale partners like Net-a-Porter and Farfetch double over the past year. The brand will debut a flagship store on Alibaba’s Tmall this summer.

Ganni has also been swift to adapt its offering and operations to fashion’s new reality. 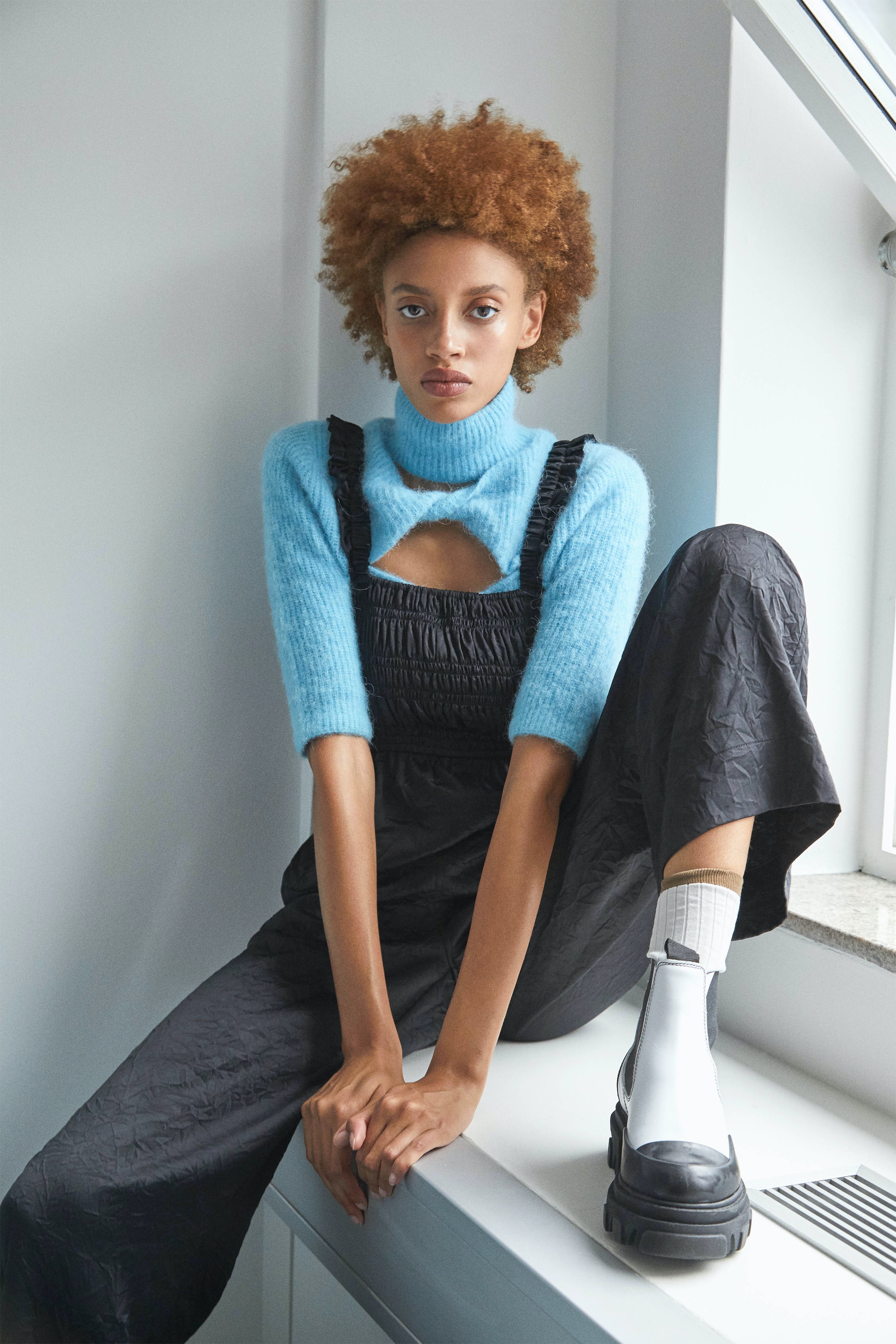 In addition to rapidly growing its direct-to-consumer business, which is set to account for 40 percent of revenues this year compared with 24 percent in 2019, it moved the majority of manufacturing from Asia to Europe, home to its biggest markets. While this increased costs slightly, it means Ganni could react faster to broader market trends and reduce lead times, which was crucial over the last year of crisis as the fast-changing situation quickly — and constantly — shifted what products shoppers wanted to buy.

Ganni also downsized collections while increasing the frequency of new product drops, to ensure it was selling the most relevant pieces for consumers at any given time. The merchandising team became more involved in the design process to amplify brand storytelling around new launches. Ganni also expanded into new pandemic-friendly categories like pyjamas and sweatpants, part of the brand’s new “Software” offering.

“We have been able to really pivot into a much more almost lifestyle brand,” said Baldo.

“Ganni nails the high-low dressing trend with its clothing working well for day or night, home or occasion,” she said. Designs like these are likely to continue to appeal as countries emerge out of lockdowns and consumer desire for more dressy yet still comfortable clothing heightens. “Consumers are increasingly wanting products that are versatile and adaptable, where Ganni clearly achieves this.”

Case Study: How Ganni Turned a Local Label Into a Global Brand