SEOUL, South Korea — For fashion consumers “in the know,” shopping in South Korea means patrolling Seoul’s ultra-hip concept stores: Space Mue, Boon the Shop and the Korean outpost of 10 Corso Como. Situated in Gangnam — the now infamous district of Seoul that is the city’s hippest address — the concept stores’ unobtrusive exteriors hide impeccable shrines to luxury fashion. With in-store décor that more closely resembles the curation of objets d’art, the immediate impression is one of independent retailers flourishing thanks to the personal taste of their maverick owners. That impression is wrong.

In fact, Boon the Shop, Space Mue and 10 Corso Como are all owned and operated by chaebols, a Korean term meaning “wealth clans” used to describe family-owned, multi-interest conglomerates such as Samsung and Hyundai. The chaebols’ dominance of the South Korean economy began in the 1960s when the government used them as commercial institutions to modernise the economy.

Although their influence has begun to wane in recent years, the chaebols’ dominance is so extreme that they account for about 85 percent of GDP, although they employ only 13 percent of the workforce, according to statistics compiled by Euromonitor in 2016.

The power of the chaebols means that South Korean fashion retail is largely under the suzerainty of two women, who are third generation cousins. Chung Yoo-Kyung is the chairwoman of luxury department store group Shinsegae, and Lee Seo-Hyun is the second daughter of Samsung chairman Lee Kun-Hee. In the intricate web of South Korean business, Shinsegae is part of the wider Samsung chaebol led by the Chung family. Other significant players include the Lotte Group, which operates over 50 department stores, outlets and small premium malls and Doosan Group, which owns and operates the Doota Tower and duty free mall opposite Zaha Hadid’s Dongdaemun Design Plaza, the venue for Seoul Fashion Week.

In Korea, retail is still owned by really big companies and big industries.

To date, the chaebols have focused on a relatively narrow strategy for fashion imports. “The distribution channels in Korea are heavily dependent on department stores,” says Inhae Yeo, a luxury consultant specialising in the Korean market, who works with the British Fashion Council.

“The most common option to enter the market for affordable, mid tier and even top tier luxury brands is partnering with a [conglomerate’s fashion division] such as Hyundai’s department Store handsome, Shinsegae Department Stores, Samsung Fashion and Kolon Fashion,” she continues.

However, the saturation of these channels means that some retailers — including subsidiaries of chaebols — are eager to innovate Korea’s fashion retail sector. These new players are expanding, adapting and employing new strategies — from late trading hours and integrated entertainment facilities to ultra-luxury niche buys and content-led marketing plays.

A mecca for Seoul’s moneyed Gen-Z and millennial crowd, Rare Market is remarkable not only for its independence from the grip of the country’s chaebols, but also its product selection of emerging international luxury labels including Jacquemus, Rosie Assoulin, Isa Arfen and Marques’ Almeida. The retailer has also launched its own line of contemporary tailoring, We11Done. 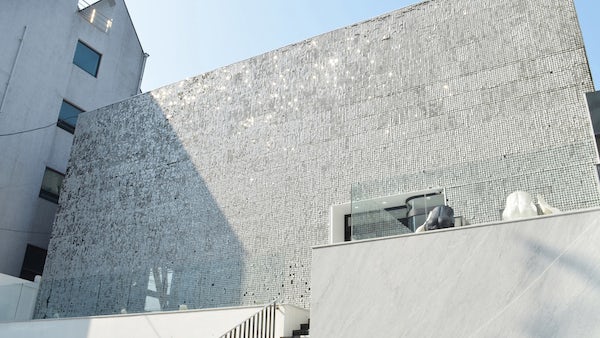 “In Korea, retail is still owned by really big companies and big industries. The big stores that are working with high-end brands try to meet standard [consumer] demands. They have, so far, been very conservative [in their buy]. But customers are getting smarter and smarter,” says Mo Kim, a buyer for the store along with its co-owners and Rare Market’s PR manager.

Old friends, Jessica Jung and Dami Kwon opened Rare Market in 2014. Previously Jung had operated her own retail operation in California for 10 years. Rare Market’s name was suggested by Kwon’s brother, G-Dragon, one of Asia’s most influential style icons and a K-Pop phenomenon. The musician’s reach of 11 million Instagram followers no doubt aided the nascent store in building buzz but it is Kwon and Jung’s targeted buy, bringing a more nuanced interpretation of luxury into the Seoul retail scene, that has sustained the store’s momentum. 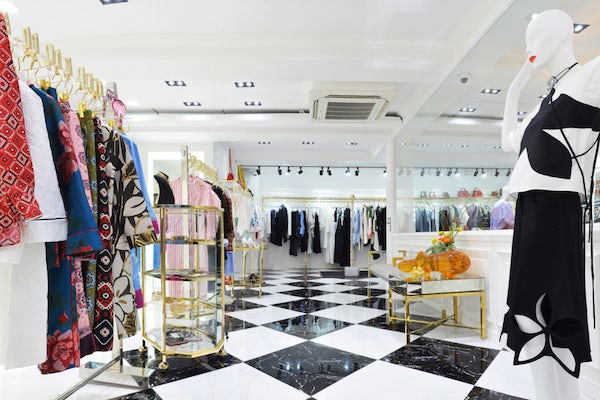 “Our customer range is especially rich and young. Their personal interest in fashion is the same as ours. The owners, the buyers and the customers are all interested in the same fashion,” explains Jung.

In the past, retailers were able to tap South Korea’s sophisticated young consumers by offering big name brands in the most publicised styles of the season. From Saint Laurent studded leather jackets, to snarling Givenchy prints, the men and women that inspired Gangnam style were born in a time of growth. However, as growth has slowed, and tastes have matured, luxury consumers want more variety and, crucially, more scarcity from the goods they buy.

“One of the reasons why we’re successful as an individually run select shop is because we can make quick decisions to meet that demand as it arises. Our advantage lies within our ability to be the quickest ones to react to global trends,” says Kwon.

Starfield — The Scale and Convenience of Western Style Malls

Opened in April 2016, the newly built Starfield Hanam mall is operated as a joint venture by Shinsegae Properties and Taubman Associates. Reported in the Korean Times as “a new growth engine for the Shinsegae Group,” the first mall built by the partnership is situated on the banks of the Han River 40 minutes outside of Seoul. It is an up-and-coming residential area popular with young professionals and families put off by the sky-high rents of the capital city. The catchment area of the mall includes the entire Sudogwon region, which is home to over 27 million Koreans, more than half of the nation’s population.

Billed as a “shopping-themed entertainment park,” the development is the first out-of-town example of a western scale mall in South Korea. Spread over 460,000 square metres, it is the largest shopping complex in the country and boasts a water park, a sports activity space and 3D cinema complex.

The fact that western-style shopping centres have taken so long to enter the market is largely due to the dominance of the chaebol-owned department store groups. “The shopping mall trend has recently been on the rise but in prime shopping zones. Even these shopping malls are connected to department stores. Coex Shopping Mall for one, is connected to Hyundai department store Coex for example,” says Yeo. However, with the department store model reaching saturation point, Shinsegae Properties and Taubman Associates are now attempting to tap the appeal of convenient parking, entertainment facilities and a broad fashion offering, which has proven so effective in the West.

Its tenants also include small but popular contemporary players like Aland — a multi-brand store aimed at 18 to 25 year olds, along with Gentle Monster, Monday Edition, Beyond Closet and Nain.

One of the smallest of the top-tier chaebols, Doosan Corporation has interests in a number of business areas, primarily construction and energy. Its most significant asset in the fashion arena is Doota Tower, the most popular duty free shopping destination for Chinese tourists visiting Korea.

“Our location already gives us an advantage,” says Park Seo-Won, the youthful hoodie-wearing heir-apparent of the Doosan empire, who operates his own design studio and is now one of Korea’s most talked about retail leaders. “Another unique point for us is this area is the only area that operates after 9pm. This is Korea’s only night-friendly [fashion] market. We operate until either 11pm or 2am,” he continues. 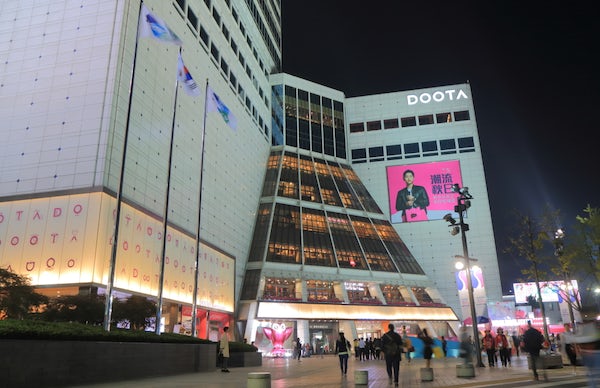 Although the mall at Doota Tower is already a very well-established retail centre for both tourists and Korean consumers alike, Park is focused on improving the positioning and buzz-factor of the Korean contemporary labels Doota has become known for carrying.

“Of course, we will continue to build our retail strength by sourcing more ‘hot items’ and bringing in more tourists to our site through in-country initiatives, but my personal challenge is to support more unique designers in creating content that is more sensitive to the South Korean market,” Park says.

“As a designer [myself], I want to use our [retail] brand as a platform for young upcoming talent, giving them a better opportunity to present themselves to Chinese, Japanese, or whoever has an interest in fashion.”

Just showing Korean brands won’t do the magic. We need to engage a little deeper.

The Doota store has already significantly invested in the merchandising of contemporary Korean brands, and is one of a few major fashion retailers to focus on home-grown design. “We had a huge shift about seven years ago and again two or three years ago, when we started to develop how to show Korean brands in a certain way. But just showing Korean brands won’t do the magic. We need to engage a little deeper to help the brands develop a better position in the market, not only in Korea but also in foreign markets,” he continues.

Doota’s annual emerging designer talent competition is central to Park’s mission to support new designers. His efforts include investing in emerging Korean fashion businesses and mentoring them in how to design with a sustained creative point of view. 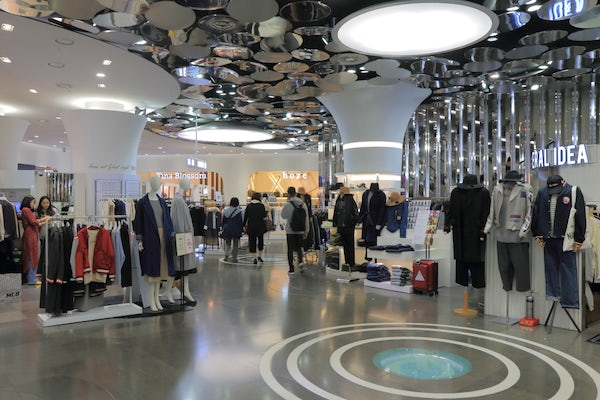 “Shopping is becoming shopping-entertainment,” says Park. “You need certain content for people to come in and enjoy their experience. Then they open up their wallet to buy other things. Retail success is no longer just having the best brands. From my perspective, building up creative content, even if it won’t sell, will work as a marketing tool to drive people into our store.”

To create buzz around brands Doosan has either directly invested in or stocks, Park has a proverbial ace up his sleeve. In addition to owning leading advertising agencies, his family also operate the licenses for Condé Nast titles in South Korea.

“Now we have fashion media that can support the rising stars we invest in. We have the marketing support within our corporate group and also have business consulting agencies, which I started out in my earlier career,” says Park. “So if we find talented young blood, we have all the support system that could echo around the brand or the designer or the product, or the artist — whoever.”