With Mosaert, Belgian Musician Stromae is Building a Fashion Brand

The second capsule collection by Mosaert, the brand started by Paul Van Haver, better known as Stromae, whose videos have attracted hundreds of millions of views on YouTube, is set to launch at Paris concept store Colette. BoF speaks exclusively with the Belgian artist and stylist Coralie Barbier about building a fashion brand rooted in music.

PARIS, France — “Mosaert is in the same vein as my music. I do it to express my vision, to learn and, above all, to have fun,” says Paul Van Haver, alias Stromae. The Belgian pop star whose second album, Racine Carrée sold 1.5 million copies in France and 2.75 million worldwide (his videos have also attracted hundreds of millions of views on YouTube), entered the fashion business last April when he launched his first capsule collection under the name Mosaert, an anagram of his musical stage name. Launched at Hunting & Collection in Brussels and sold in the brand’s online store, the collection was made up of polo shirts and socks, retailing for €90 (about $110) and €17, respectively. Produced in small quantities (2000 polos, 4000 pairs of socks) the collection sold out in a matter of days.

Tomorrow, at Paris concept store Colette, Mosaert will launch its second capsule collection, which will also be sold on the brand’s e-commerce site. The collection is composed of new polo and sock designs, as well as sweaters and cardigans, priced €148.

Paul Van Haver’s venture into fashion isn’t, perhaps, all that unexpected; the singer has always displayed a strong sense of style, something picked up by the American press when Stromae sold out a series of concerts at New York’s Best Buy Theatre. Stromae has the makings of a huge music phenomenon: his music is catchy, his lyrics are meaningful and poetic, and his look is easily recognisable. Son of a Rwandan father and a Belgian mother, his baby-face is not easily forgettable, and his outfits stand out from the pool of music artists with their colourful prints, vivid tailoring and extravagant bow ties.

“I was always interested by style and clothes, I always paid extra attention to my looks as a performing artist, but the desire to create a brand came as I was going through my music career. I wanted to express myself in a new way,” he explains. The idea of launching his own brand (though Van Haver doesn’t like the word, saying it sounds too serious) has been on his mind for quite a while. But the decisive moment came when he met Coralie Barbier, now his personal stylist. “She is the one who showed me it was possible,” Van Haver says. “I was always a bit afraid of looking like the Swiss Army-knife artist who does so many different things, going in too many directions, but, after all, Coralie is the one who bears the brand on her shoulders. She takes care of all the technical steps, areas I’m completely clueless in.”

Before launching Mosaert, the duo collaborated on Stromae’s outfits: everything the artist wears, whether on stage, in music videos, or during TV appearances, was originally created by them. The next step was to offer the clothes they were imagining to the public — though not everything is available for purchase. According to Van Haver, this is partly because of production constraints, but, he confesses, also because he “wants to have some clothes that are only his own.” 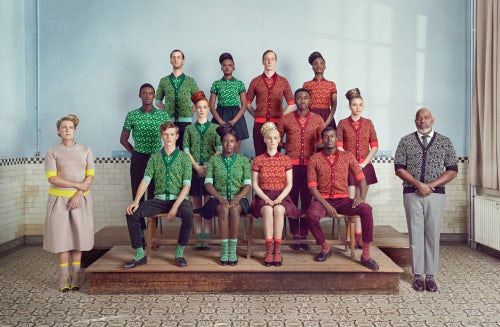 “I’ve never really liked the term ‘stage costume.’ Very often it’s not wearable — look at Lady Gaga or Katy Perry! With Stromae, it’s different. You can wear what I wear in real life,” he explains. “I like the stuff of the people, the popular, there is not an ounce of hipness in what we do.” Having sold millions of albums, Stromae has never denied being a ‘mainstream’ artist — in fact, he embraces this status.

Asked if he is afraid selling the clothes he wears might dilute his image, Stromae takes a second before answering. “You know, it’s interesting, I have been thinking about it a lot. I even received a letter from someone who said that I shouldn’t be doing the brand because I should be the only one wearing those clothes. But, the celebrity system, I believed in it for a while — I thought I had to conform myself to being an out-of-reality artist but then I realized it was dehumanising. And I don’t want that. I want to stay real, approachable, in touch with the people.”

In touch with the people, and in touch with his music: “The starting point of the collection was of course Paul’s music, in that way we created clothes according to his music singles,” explains Coralie Barbier. The result is very graphic items, with a tailored English shape and prints inspired by African wax. All of the products are unisex, something dear to the duo, for differing reasons. For Paul Van Haver, it comes from “the jealousy that girls can buy affordable clothes that are fun, colourful, eccentric. For boys it’s all about grey, navy, white and black. There were so many times where I wanted to buy women’s clothes because I couldn’t find something fun.” 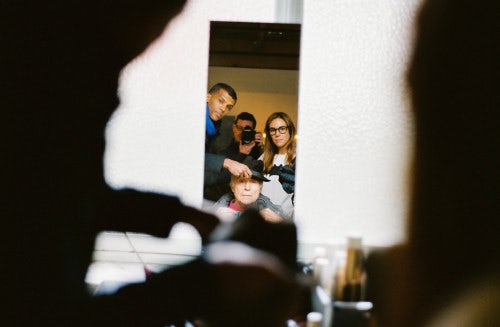 For Coralie, the unisex element is “about the characters that Paul is able to play with in his musical career.” In this way, Mosaert is truly a reflection of Stromae’s artistic vision, in which gender differences have always been a recurrent theme. In December of last year, Stromae appeared on French cable channel Canal+, on the nightly show Le Grand Journal, to perform songs from his latest album. Through camera effects, seated aside host Antoine de Caunes, Stromae introduced his “significant other” to the stage: a tall woman entered who looked like Stromae, (and who was, in fact, Stromae dressed up), wearing a tailored burgundy velvet jacket, and appeared to take a seat facing him. Appearing on screen together, both talked about the writing process of the song “Tous les mêmes,” which addresses the relationship between men and women. The conversation turned into an argument on who did what. The duo then walked to the stage and merged into one person, dressed as a woman on the right side, a man on the left. The same image, of a dual-gender Stromae, appeared on the cover of Time Out New York.

But the tight relationship between Mosaert, the brand, and Stromae, the singer, is set to end. “Paul is of course the face of the brand, he wore the first capsule,” says Coralie. Paul cuts in, “I wore everything, yes, but now I want to distance Stromae from the brand. I want it to stand on its own. Otherwise, we contain ourselves too much in the design process. We don’t want to do only what Stromae would wear. By separating the two we’ll be able to do more.” 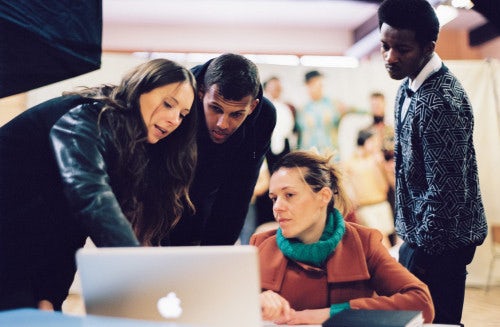 The ambition is simple, says Coralie: “As for now, the capsules are following the footsteps of Stromae, because there has been the album, the tour,” she says. “But when it will calm down, when he goes back to the studios, we want the brand to stay in the air du temps.”