Back in 2008, during the worst financial crisis since the Great Depression, American retailers were forced to shutter 6,200 stores in a single year, as consumers — facing foreclosures and investments that had suddenly lost value — pulled back on shopping.

Today, almost 10 years later, the US economy is back in action. Consumer confidence is the highest it’s been since 2000. Unemployment is at 4.5 percent, a 10-year low, and stock markets have reached all-time highs, with the Dow Jones Industrial Average passing the 20,000 mark for the first time in January, a position it has managed to sustain.

And yet, year-to-date shutterings of American retail stores have already surpassed comparable figures for 2008. In the first quarter, approximately 2,880 stores in the US closed, up from 1,153 during the same period in 2016, according to a report by Credit Suisse, which estimates that, when all is said and done, there could be more than 8,640 store closures in the US in 2017. That’s about 147 million square feet of retail space up in smoke.

Deep-value players like fast fashion and off-price retailers have long been eating away at traditional full-price players, whose brands have been waning for years and no longer resonate the way they once did. At the same time, consumption is moving online. But spending is also shifting away from traditional retail categories like fashion and apparel to things like consumer technology and experiences. All of this is creating a profound tipping point for traditional American retailers, particularly in tier-two and tier-three locations.

The weakest are falling first. American Apparel. BCBG Max Azria. The Limited. Since January, a wave of bankruptcies has washed through the industry. Certainly these businesses are suffering from their own specific woes. But in today’s new retail reality, no one is safe. Neiman Marcus, Payless and Bebe are all reported to be in deep trouble. Meanwhile, Macy’s and J.C. Penney are closing over a hundred stores each.

There's no doubt that many American retailers suffer from overstoring, especially in suburban areas where traffic is falling off. “We expect the number of productive retail centres to decline by at least 25 percent over the next 10 years. Store closures are inevitable and delay will exacerbate ROIC declines as tier-two and three locations become increasingly unprofitable,” according to Credit Suisse.

But closing stores is not enough to ensure survival. Already, a majority of purchases, even if they take place in physical stores, are influenced by what consumers do online. This makes a robust omnichannel strategy indispensable. Retailers must also explore new models like showrooming, linking physical spaces to digital inventory, reducing overhead costs and improving productivity per square foot as exemplified by players like Bonobos.

What’s more, in a world where fashion trends and consumer expectations are moving at the speed of digital, retailers who operate physical store networks must learn to keep up, offering new product selections and experiences that evolve as rapidly as Facebook’s news feed. And speaking of Facebook, as consumption moves online and people no longer need to visit physical stores to buy things, retailers must learn to make their stores places for social gathering.

Just look at Apple. The company certainly sells a powerful product. But the company also has the highest productivity per square foot of any US retailers' stores because it is reimagining its stores as community centres, where people have a compelling reason to come and spend time.

There’s little debate that continued store closures are inevitable. It’s what retailers do to evolve their remaining store network that matters most and will separate the winners from the losers as a sea change sweeps across the sector. 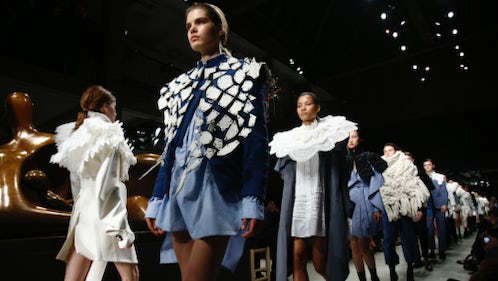 Burberry sales hit by US slowdown, ahead of CEO handover. Shares in the British luxury goods firm fell by nearly 8 percent on Wednesday after the company reported a slowdown in quarterly sales growth. Weak trading in the United States countered sales gains in mainland China that were boosted by a post-Brexit weakened pound, revealing the challenges that lie ahead of incoming chief executive Marco Gobbetti when he assumes the role from Christopher Bailey in July.

Kate Spade first quarter sales decline. The accessories maker reported a 2.4 percent drop in sales over the past year, or 8.1 percent excluding e-commerce — its first same-store sales decline since 2010. Its latest results, which sent its shares 8 percent lower on Tuesday, helps strengthen the position of potential suitors like Coach and Michael Kors, who are rumoured to be interested in acquiring the $3 billion business.

Walmart in talks to buy Bonobos. The world’s largest retailer is reported to be in advanced discussions to acquire online men’s fashion retailer Bonobos, having agreed on a price and deal. The move would help strengthen Walmart’s online offering, which it has been aggressively pushing in an attempt to close the gap between competitors like Amazon, and would make it the fourth e-commerce acquisition by the company in less than a year. The company recently acquired Jet.com, Moosejaw and ShoeBuy.

Zalando misses profit expectations. Shares in the German online fashion retailer fell by nearly 6 percent on Wednesday after it stated adjusted operating profit would sit between €10 million to €30 million but this fell short of the consensus analyst estimate of €32.7 million. The news comes as rising competition from Amazon, as well as European retailers like H&M and Zara, compete for a bigger share of Europe’s €46 billion e-commerce market.

Givenchy reveals childrenswear line. The 130-piece collection, which features "mini me" versions of some of the label's most popular pieces, will debut in July for the Autumn/Winter 2017 season. This new initiative comes under the artistic direction of recent appointee Clare Waight Keller, who was announced as Riccardo Tisci’s successor last month. By expanding into childrenswear, the house aims to attract a new demographic, whilst building the brand's offering to its existing customer.

Dior heads to Tokyo. The French fashion house held a series of events in Toyko, including a haute couture and mens’ show, to celebrate the opening of its five-floor flagship in Ginza Six, a new luxury shopping mall. Dior CEO Sidney Toledano said its primary goal of expanding in Japan was to tap into the local luxury consumers, as spending in the country is at record levels. Japan's personal luxury goods market was worth $23 billion last year, according to Bain & Company.

Rebekka Bay Joins Uniqlo. The former head of product and design at Everlane will join the Japanese apparel giant as creative director of its research and design centre in New York. This announcement comes just a month after Uniqlo declared ambitions to dominate American retail. Bay, whose CV includes creative director roles at Gap, Bruuns Bazaar and Cos, is well acquainted with the fast-fashion market. Her new appointment will be effective May 1.

Amazon wins patent for on-demand clothing manufacturing. The e-commerce giant was awarded a patent on Tuesday to implement an on-demand manufacturing system that produces products only after an order is placed. The move could give Amazon the competitive edge it needs to realise its ambitions of becoming a leading player in the clothing industry, and comes at time when many fast fashion giants like H&M are feeling the pressure as profitability becomes more challenging in today’s rough retail environment.