Retail sales recovered in June but analysts say the uptick will be short-lived. How can stores woo customers back?

Retail sales recovered in June but analysts say the uptick will be short-lived. How can stores woo customers back?

NEW YORK, United States — When Ty Gaskins went shopping in SoHo earlier this month, it was his first time entering a clothing store since the pandemic reached the US in March. He said he felt entirely safe and well taken care of — and that he won’t be doing it again anytime soon.

“There’s really no reason to shop right now,” the 23-year-old freelance writer and publicist said. He added that if he hadn’t needed a beach outfit for a last-minute trip to the Hamptons, he wouldn’t have ventured out that day either.

Retailers have spent months giving their stores pandemic-era makeovers, hoping that Americans stuck at home since March would be itching to return to the mall. Gaskins said at Bloomingdale’s, sales associates passed out free disposable masks. Club Monaco brought him a fresh pair of shorts from the stockroom to try on. The experience was pleasant, even approaching normal.

But crowds haven’t materialised. Though many stores saw an initial surge in foot traffic after reopening in late May and early June, daily visits have leveled off at nearly 50 percent below pre-pandemic levels, according to Cowen.

There are signs even this partial recovery is in jeopardy. In the Northeast, where infection rates are low, lingering fears about the coronavirus have limited store visits. In some states where new cases are soaring, including California, local governments have again closed stores. Across the country, high unemployment and economic uncertainty are keeping wallets closed: the Consumer Confidence Index, published by the Conference Board, fell to 92.6 in July from 98.3 in June, marking the end of three months of progress. 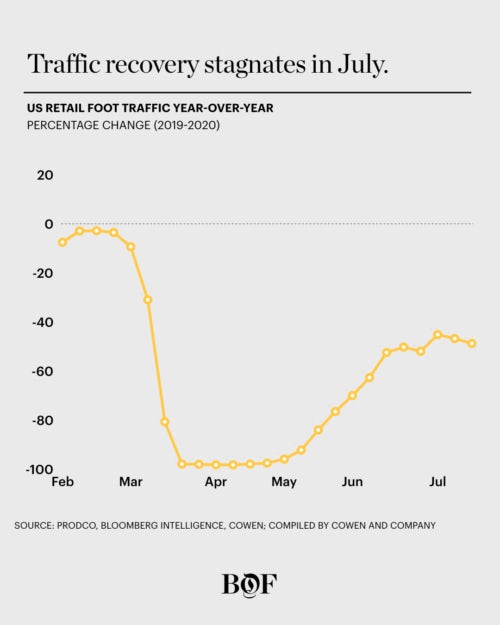 “We have seen big improvements every week but that’s stalled,” said Bernstein analyst Jamie Merriman. “I do think there will be a trend of traffic numbers going backward.”

Customers today are also more reluctant to visit stores than they were in April, according to a survey of 1,200 women by First Insight published Thursday. The company found 68 percent said they feel unsafe trying on clothes in dressing rooms, up from 65 percent three months ago.

Where People Are Shopping

Retailers have hit on two surefire ways to coax people to shop: bargains and active wear. Sales of athletic apparel have surged since the start of the pandemic, as consumers became more focused on fitness and comfort while restaurants, clubs, movie theaters and other forms of entertainment remain closed, said Gabriella Santaniello, founder of the retail consulting firm A Line Partners.

Debit card data compiled by Bernstein shows that spending on athletic apparel brands including Nike, Adidas, Lululemon and Under Armour increased 46 percent year-over-year in the week ending July 17. Most of that spending is taking place online — though not all.

“We’re still seeing strong turnout for athletic apparel and anything that’s getting you outdoors,” Santaniello said.

Big sales are also drawing people out. The location-based marketing technology firm GroundTruth identified just four out of 75 major retailers that saw traffic increases of more than 5 percent between June 15 and July 23: Zara, Lord & Taylor, LLBean and J.Crew. Of the four, Zara has been in the middle of its annual summer sale, Santaniello noted. J.Crew, meanwhile, has been offering up to 80 percent off as it works through the bankruptcy process and Lord & Taylor is holding clearance sales amid reports it may shut down entirely.

A Zara spokesperson said its rebound in traffic reflected the retailer’s ability to fulfil orders from stores during the lockdown, which helped keep customers engaged while they couldn’t shop in person.

Off-price retailers have also seen more in-store customers. Traffic at T.J. Maxx is down about 17 percent from last year in the second week of July, according to Placer.ai, which tracks store visits — a much more temperate downturn compared to others in the industry.

In addition to offering neverending sales, off-price chains are also at an advantage over traditional department stores because they mostly anchor outdoor malls, rather than enclosed buildings.

“Consumers are more comfortable going back into an [outdoor] environment,” Merriman said. “And off-price is often located in the strip mall setting,” where shoppers can also pick up groceries and run other errands. 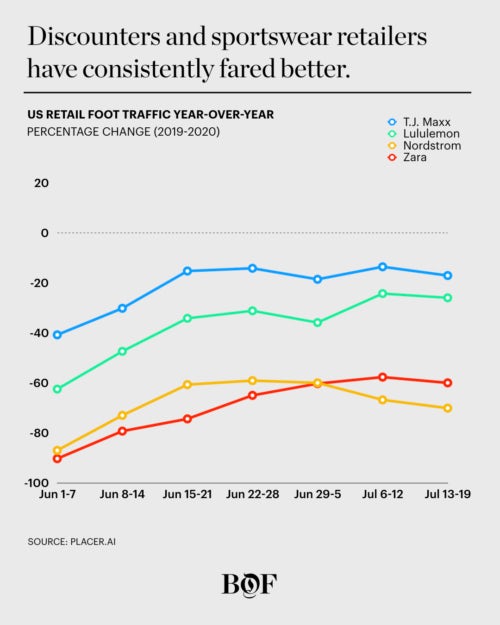 Why the Recovery Is Faltering

When the US government sent checks to millions of American households in April as part of a stimulus package, retailers saw a bump in sales. The checks, some as large as $1,200, along with additional cash for the unemployed, ensured consumers kept spending even as the economy nosedived into a deep recession.

But the unemployment bonuses will expire at the end of July. Congress has yet to agree on a second iteration of the stimulus package. Analysts say retail spending will likely dip if the benefits aren’t renewed.

Ultimately, the health of the economy will determine the fate of the retail sector. But so far, the economy shows no signs of revival as coronavirus cases continue to spike in the US. Businesses have begun to shutter their doors for the second time.

“The road to recovery is likely to be an extended one,” Wells Fargo analyst Ike Boruchow wrote in a report.

What Retailers Can Do

As coronavirus cases rise and the economy stumbles, retailers need to tackle their customers’ anxieties about visiting stores head on. In a survey of 1,000 American consumers published on July 23, Wells Fargo found that 85 percent of respondents said they have become more concerned about entering stores to shop for apparel. The bank found that 37 percent had visited stores but are now avoiding doing so due to the rise in Covid-19 infections, while 35 percent said they had yet to return to stores.

After hesitating to mandate mask-wearing inside their stores, retailers across the board have taken action in the past month to do so. Mask requirements, along with hand sanitiser stations and regular surface cleanings, are among the bare minimum safety measures that consumers expect, according to a June poll conducted by Kelton, a consultancy that is rebranding to Material Company.

Retailers also must offer customers a good reason to visit their stores, said Robert Shumsky, professor of operations management at the Tuck School of Business at Dartmouth.

“Right now, the value of going shopping isn’t high enough to get over the fear of health risks, so stores can do two things — increase the value proposition of visiting the store … and decrease the perceived health risk,” Shumsky said.

Discounts are one way to get shoppers in the door, he said, but other perks might be more effective.

“One-on-one service, expert advice, even pairing up online consultation with a store visit” are good options, Shumsky said, “and [I] recommend the use of appointments, which will become more and more the norm.”

Shopping appointments will ensure each consumer receives the utmost attention from sales associates and eliminate the risk of proximate encounters with other shoppers that pose health risks.

You don’t want to lure them in before they’re actually ready.

Retailers shouldn’t be too aggressive about nudging customers to come back to stores, said Tiffany Hogan, a retail analyst at Kantar.

“You don’t want to lure them in before they’re actually ready,” Hogan said. The retailers that have performed well are the ones that are able to say, “You may not be ready to come back to the store but that’s okay, we’re available wherever you want to be.”

Customers want options: Instead of in-store exclusive promotions, brands can let customers know that stores are open but shopping online is also possible, as is click-and-collect or curbside pickup.

Many retailers began investing more in e-commerce when they were forced to close stores. With brick-and-mortar locations seeing limited traffic, that temporary shift may become permanent.

Most brands won’t have much choice.

“Yes, you want them to return to the stores, but at the same time, many customers just won’t,” Hogan said.

How to Go From Wholesale to Direct-To-Consumer

What Happens When Shoppers Refuse to Wear Masks?