NEW YORK, United States  —  When Brian Bolke walked into Hudson Yards in early 2017, he realised the $25 billion mega-project could be home to his newfangled retail concept: a transaction-less, inventory-less store called The Conservatory.

Two years later, his idea is coming to fruition as part of Hudson Yards’ launch on Friday. The Conservatory joins Neiman Marcus and Forty Five Ten, which Bolke co-founded and later exited, as the luxury mall’s three large multi-brand tenants.

At The Conservatory, shoppers can try on any of the items on display — there are no conventional racks — in sizes 0 to 12. Purchases will be processed through brands’ websites, rather than the store, and then shipped by the brands to customers’ homes.

Essentially, the Conservatory is a living, breathing website — one that also contains a flower stand, a cafe and an installation where shoppers can go into a private room and immerse themselves in the “sounds, scenes and scents of Provence.”

The Conservatory isn’t the only retail experiment among the roughly 100 stores and restaurants at Hudson Yards. As one of the largest and highest-profile retail developments in years, Manhattan’s newest mall represents a golden opportunity for brands to deploy the latest thinking on re-imagining the in-store experience. The stakes are high: tens of thousands of stores have closed in recent years, raising questions about the role of brick-and-mortar retail when consumers can find anything they want online.

Next-gen stores have e-commerce built into their DNA, with a goal of seamlessly blending customers’ online and in-store experiences. At a minimum, that means continuously rolling out new products and offering amenities that go beyond the merchandise.

“What we’ve seen happening is that the store now becomes a brand ambassador, both online and brick-and-mortar,” said Bill Taubman, chief operating officer of shopping-focused real estate investment trust, Taubman Centers. “Therefore, the store must be the best it can be in order to create a bond with the customer.”

The retail sector is littered with abandoned technologies and strategies once heralded as the key to wowing customers tired of browsing the same old stores. Coty used VR to sell perfume and Gap created an augmented reality app that let users “try on” clothes at home (assuming they had a Google Tango smartphone, the only device that could run it). Amazon opened a cashierless store in Seattle that for the moment appears too expensive to replicate widely.

I think sometimes we confuse customer expectation to customer reality.

At Manhattan's Hudson Yards, the recently opened Palisades Village in Los Angeles and a number of other new shopping districts around the world, retailers are rolling out other forms of technology that, while not as flashy as magic mirrors or oculus sets, are effective in driving sales.

“I think sometimes we confuse customer expectation to customer reality, and what’s different today is that the customer is driving the business in a much more intense way that before,” Bolke said. “But this doesn’t mean the customer wants a completely foreign brick-and-mortar experience.”

1. All roads lead back to data

Retailers have grown adept at harvesting consumer data online, but some see tracking shoppers in physical stores as the next frontier — and potentially an even better way to get to know their customers.

Naadam, a cashmere sweater brand that started online, views its stores as a means to acquire new customers and, just as importantly, gather data about them. The company has opened two stores in New York and one in Washington DC.

“We use retail as a specific way to continue to evolve our customers’ data and ease customers through an ongoing acquisition funnel, ultimately to drive the most important data point: lifetime value,” said chief executive and co-founder Matt Scanlan.

Naadam works with analytics firm RetailNext to track customers as they browse. Its store on Bleecker Street, for instance, contains heat sensors in the ceiling so the brand could study which products or displays draw the most traffic. Another one of its stores uses facial recognition to tag returning customers.

Naadam and other data-driven companies like Rent the Runway and Nike aim to create perpetually updated profiles combining online and in-store data on customers, which could be used to make personalised recommendations or spot patterns in buying behaviour. 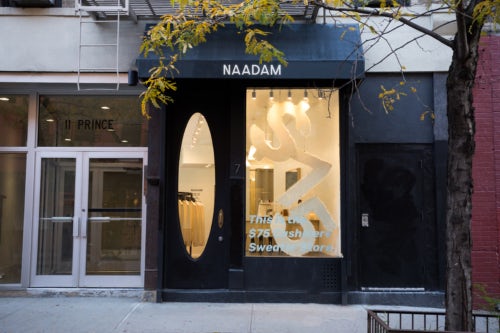 2. Technology should be everywhere — and invisible

While targeting customers can be useful, going overboard with digital ads can result in alienation. The same is true for in-store technology. A 2018 study by tech firm Fujitsu found that 25 percent of retailers it surveyed said technology is making connecting with the customer more difficult.

“I do a lot of research online and some of these nameless department stores will send me emails that are personalised because they look at my Google search, and it’ll be feathered capes,” Bolke said. “That’s when artificial intelligence is not your friend.”

Savvy retailers are putting consumer engagement first. For instance, Hudson Yards will have a roving concierge service instead of an information desk or interactive kiosk. Service personnel will be equipped with iPads and roam up and down the corridors of the seven-story mall, approaching lost shoppers or helping people make reservations at one of its 20 restaurants and bars.

“The underscoring element is that we’re not turning ourselves over to technology,” said Webber Hudson, executive vice president at Related. “Out tech is driven by humans, delivered by humans.”

The key, according to Bolke, is invisible technology — the kind that makes the customer experience seamless but doesn’t require any work on their part, such as his backend marketplace platform that redirects sales to brands.

“People live with so much technology all day that they don’t need to go to the store to have more tech thrown at them,” he said.

The simplest, most intuitive technology a retailer can offer is the ability to buy online, and pick up in store (BOPIS, as it’s known in retail circles). Variations include buy online, return in store and buy in store, receive delivery at home. Retailers from Walmart and Kohl’s to Nordstrom and Bloomingdale’s are competing to make it as convenient as possible for customers to shop.

Such services are becoming so ubiquitous that, unless you’re a rarified luxury brand like Celine or Chanel, consumers today will be upset when they cannot return an online purchase to a store.

Zara, for instance, has transformed in recent years to an online player by blurring the lines between shopping at its stores and on its website. Shoppers get free shipping on any order over $50 (or pick-up in store for free with no minimum) and can return items through shipping, or in stores within 30 days. This allows consumers to try on a multitude of garments at home and pop into a local store to return unwanted items.

4. Make the most out of inventory

According to Related’s Webber Hudson, the stores he’s leasing today are significantly smaller. This is because smart retailers are turning over their inventory faster to consistently offer new products, reflecting the popularity of fast fashion as well as the product “drop,” à la streetwear brands. Retailers that ship items to customers’ homes can also store inventory at a warehouse rather than in the back room of their shops.

The Conservatory is relying on an inventory system that tracks items in real time, so products can be whisked off the floor when a size is unavailable. The selling point to customers: anything they want to try on is guaranteed to be available in their size.

Zara tracks garments with radio frequency identification technology that updates their availability in any given store, and online as well. Introduced last year, the system will also treat some stores as storage and distribution centres for online orders, speeding up deliveries for digital shoppers, a Zara spokesperson told BoF. The integrated stock system will be rolled out to all stores by 2020.

More standard among modern retailers are backend in-store functions like Saks Connect, which the luxury department store launched in 2017. The app gives sales associates access to its entire product inventory, both in the store at hand as well as online. This allows them to help customers place e-commerce orders when certain sizes or styles aren't available at their local storefront.

Instagram may have kicked off the “experiential” retail trend, in which companies including Winky Lux and Bloomingdale's create hashtag-worthy backdrops and installations in the hopes their customers will generate some free publicity online. But the race to provide ever-more-compelling in-store experiences goes beyond feeding consumers’ social media addiction.

Spending on dining out, entertainment and travel is growing four times faster than spending on goods, according to McKinsey, and that’s not to mention the $4.2 trillion-and-counting health and wellness market (Hudson Yards also boasts the world’s first Equinox hotel).

But for retailers trying to tap into this experience economy, it’s about providing more than just Instagram fodder and food options — it’s about tapping into a luxury lifestyle that their consumers aspire to possess.

“A new generation of consumers are really reimagining what the whole notion of luxury looks like and I think most agree that it’s about less about what I own and more about what am I doing,” said retail consultant Doug Stephens.

If I’m a retailer, I want to be near this wealthy yoga mom crowd.

So what are luxury consumers doing? More likely than not, they’re getting a coffee from Blue Bottle. The venture capital-backed, San Francisco-backed cafe is a notorious marker of affluence wherever it inhabits — and has been singled-out by industry insiders as a coveted neighbour in retail developments.

“Typically the first tenant sets the tone, and our first tenant was Blue Bottle Coffee,” said Jay Luchs, a retail broker at Newmark Knight Frank, said of a development he’s currently leasing. “They represent something that’s considered hip and cool and interesting and not everywhere … If I’m a retailer, I want to be near this wealthy yoga mom crowd.”

Proximity to a Blue Bottle isn’t what matters — though it certainly helps. Rather, upscale retailers look to associate themselves with other symbols of aspirational luxury. The key, according to Compass broker Robin Abrams, is tying the experience to the DNA of the brand.

“If you want to get [customers] into stores, it’s product, service and experience,” she said. “The stores are being used not just to showcase products but to introduce the brand and tell the brand’s story.”

Saks, for example, opened L’Avenue, a Parisian restaurant, in its Manhattan flagship.  For athleisure brand Bandier, the right experience means having its own fitness studio, Studio B. French menswear brand Cremieux, one of the new stores in Hudson Yards, plans on throwing weekly styling soirées serving champagne. New York retailer Opening Ceremony is known for its trendy downtown parties. Even libraries can be on-brand if executed well, as French label Sézane has done.

“Stores need to communicate the full emotional experience with the brand, but they can only do that if they have premium stores — with fewer, better stores,” Taubman said.