This week, J.Crew's Millard “Mickey” Drexler announced his decision to step down as CEO after 14 years, amidst turnaround efforts that have failed to work. The news came two months after the departure of Jenna Lyons, the company’s longtime creative mastermind, and follows several years of shrinking sales growth at the American specialty retailer.

How quickly things change. Once upon a time, Drexler and Lyons were known for restoring J.Crew’s cultural cachet and boosting its financial fortunes. At its peak, the brand was synonymous with Michelle Obama’s all-American brand of casual chic. But sales growth began slowing in 2012 and the company has been on a downwards trajectory ever since.

Certainly, market-wide challenges like the rise of e-commerce, falling mall traffic, discounting culture, a post-recessionary mindset and increased competition, especially from fast fashion players, all played a part in J.Crew’s fall from grace. But the brand also faced specific challenges of its own making.

J.Crew was once known for moderately priced, classic items liked “stadium cloth” coats, cashmere sweaters and bathing suits. (For decades, ordering a bathing suit from J.Crew’s catalogue was a rite of passage for young women.) Drexler and Lyons brought the brand into the zeitgeist, inspiring consumers with a sparkles-meets-military mashup. But as J.Crew’s fashion credentials began to grow, its focus on staple items suffered and an increasingly cool and expensive product mix alienated once-loyal customers, who saw J.Crew as out-of-touch with their needs. Lyons stuck to her aesthetic. But while early on she had forged a true partnership with Tracy Gardner, the company’s president from 2004 until the middle of 2010 and the yin to her yang, Lyons never found another equally strong partner on the company's merchandising team, contributing to a growing disconnect with customers.

The moment of truth came in July 2013, when an unhappy customer wrote Drexler an email saying, “I am so disheartened and disappointed that you are leaving your core values and styling and abandoning your loyal customers. I would have thought you had learned your lesson at the Gap!! Why mess with these iconic brands and change them into something they’re not?” Drexler embraced the feedback, assembling members of his executive team for a phone conversation with the customer.

“We are on it for sure,” he emailed the customer after the call. “I hope you see a difference this Fall.” True to his word, Drexler brought back J.Crew favourites. But he also turned to lower-quality manufacturing in order to reduce prices and thereby further fuelling the customer backlash.

Sometimes the company was slow to make strategic shifts, changing too late in the game. Back in 2014, Drexler repeatedly said J.Crew would never get into the so-called “athleisure” segment. Then, in 2016, following the recommendations of an external consulting company, the brand dipped its toes into activewear, announcing a partnership with New Balance long after the athleisure market had bubbled and Lululemon was already facing trouble.

There’s also the simple truth that J.Crew’s aesthetic had started to feel passé. And that the company faced a mountain of debt, which, at last count, had reached $2.1 billion. To be sure, a shakeup was overdue, but the brand also failed to adequately prepare for a post-Drexler, post-Lyons future.

Meanwhile, J.Crew’s Madewell division has thrived with its laid-back, modern-day interpretation of classic American clothing. But if it’s not careful, the fast-growing Madewell could easily fall prey to some of the same woes that beset J.Crew.

As for the future of the J.Crew brand, incoming CEO James Brett, formerly of West Elm, has already learned his own lessons on quality. Earlier this year, the company's "Peggy" sofa attracted a flurry of customer complaints and West Elm was forced to withdraw the item from sale and offer customers a full refund.

Prime Minister Theresa May's snap general election backfires, resulting in a hung parliament. At press time, Theresa May was jockeying to remain prime minister of a minority government propped up by the Democratic Unionist Party. Uncertainty surrounding the outcome has caused the pound to fall by more than 2 percent and increases the likelihood of a softer Brexit as Britain's political parties will need to agree on any exit deal. Brexit negotiations are due to start on June 19, but may be delayed until the political situation in the UK has settled.

Hudson’s Bay Company announces 2,000 job cuts. The layoffs, which will eliminate 2,000 positions, began on Thursday and impacted senior-level staff at Saks Fifth Avenue, Gilt Groupe and Lord & Taylor. Several members of the buying team were also let go, and some staff were given demotions. The Canadian-American conglomerate is flattening its hierarchy and improving back-of-store productivity in an effort to realise more than $350 million in annual savings.

The RealReal raises another $50 million. The investment from Great Hill Partners, announced Tuesday, boosts The RealReal’s funding total to $173 million. Chief executive Julie Wainwright says the new investment will be used to expand The RealReal’s physical presence through concept stores, the first of which will open in New York, as well as “luxury consignment offices,” to attract new customers and more inventory.

Renzo Rosso buys minority stake in RetroSuperFuture. The stake in the Milanese eyewear company, was acquired for an undisclosed sum by Red Circle Investments, the family investment fund of the Diesel and OTB founder. “The freshness and innovation level of [RetroSuperFuture founder Daniel Beckerman’s] company make it an ideal partner for collaboration," said Rosso, who will also join RetroSuperFuture’s board of directors.

Yoox Net-a-Porter bans fur. Net-a-Porter has been phasing out fur for over a year, however this formal policy will prohibit the sale of fur across all YNAP sites, including Mr Porter, Yoox and The Outnet. While many within the fashion industry support YNAP's position, there is also a strong contingent that continues to endorse fur. The global fur trade is worth $30 billion, and there was an 8 percent increase in the use of fur at London Fashion Week in February.

Boohoo.com raises $65 million in share sales. The fast fashion player, which recently acquired Nasty Gal, has sold 22.7 million shares to help fund the construction of a 600,000 square-foot warehouse. Boohoo’s first quarter statement revealed that the company’s revenue was up 106 percent. It is hoped that the warehouse will provide capacity for up to £1.5 billion in sales and help Boohoo meet demand for its high fashion, low-cost product.

Arcadia Group’s profits slide. Profit fell by 16.5 percent to £211.2 million ($272.6 million) in 2016, according to Companies House. The company, which owns Topshop, Dorothy Perkins and Miss Selfridge, blamed picky customers and a decline in spending for the losses. It caps off an unsuccessful year for Arcadia, which is also facing a £426.8 million pension deficit.

Harper’s Bazaar relaunches its e-commerce site. ShopBazaar will stock a smaller inventory, focusing on curated offerings from Harper’s Bazaar editors. “This will really give us the opportunity to capitalise on the trends, the well story, the beauty story and the Bazaar lists,” said e-commerce director Katie Hobbs. Last year, the Hearst-owned site decided not to renew its contract with retail partner Yoox Net-a-Porter, which supplied 50 percent of its inventory. 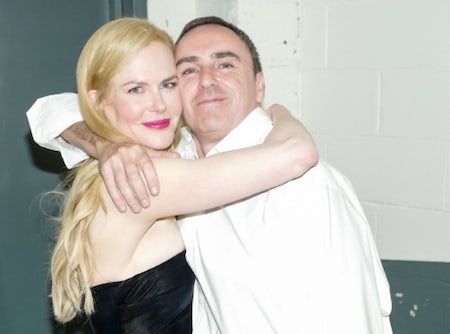 J.Crew’s Mickey Drexler steps down as CEO. Drexler, who held the role for 14 years, will stay on as company chairman. Drexler's announcement follows news that longtime creative lead, Jenna Lyons, will also leave the company. During their years of collaboration, Drexler and Lyons transformed J.Crew into a cultural phenomenon. But in the 2016 fiscal year, net sales at J.Crew were $2 billion, down 6 percent from the previous year. Jim Brett, most recently president of West Elm, has been confirmed as Drexler’s successor.

Tim Coppens is to show in Paris. The New York-based menswear designer, who showed his Autumn/Winter 2017 collection in Florence at Pitti Uomo, will next present in Paris on June 22. “The main reason for us to show in Paris is to present the collection as a whole and not as a representation in our sales showroom after the show,” said the designer, who is also creative director of Under Armour.

Thomas Pink hires John Ray as creative director. Ray’s appointment comes two months after Christopher Zanardi-Landi took over as president and chief executive, and is part of a wider strategy to revamp the LVMH-owned brand over the next 18 months. Until February 2016, the designer was creative director at Dunhill. Ray’s debut collection for Thomas Pink will be for the Autumn/Winter 2018 season.

Google digitises the world’s fashion archives. Google’s Cultural Institute has partnered with over 180 institutions including The Metropolitan Museum of Art’s Costume Institute, the Victoria & Albert Museum and the Kyoto Costume Institute to make them accessible online via its Google Arts & Culture platform. The project will allow for the virtual display of thousands of garments and leverage technologies like Google Street View to offer immersive experiences like virtual walkthroughs of museum collections.

Apple unveils HomePod speaker. The voice-activated, hands-free speaker is powered by Apple’s voice assistant Siri, and will go on sale in December, priced at $349. HomePod is Apple’s answer to Amazon’s Echo, a commercial success the company released three years ago. Last year, Google entered the space with Google Home, and a Microsoft Cortana-powered speaker is currently in development. The Homepod will be Apple’s first new hardware launch since the Apple Watch in April 2015.

LVMH launches 24 Sèvres. The luxury conglomerate’s multi-brand e-commerce site, which went live on Tuesday, is the company’s most significant digital investment since hiring Ian Rogers as chief digital officer in 2015. This is the second e-commerce platform to come from LVMH this year. In April it dipped a toe into the “experience economy” with the launch of Clos19, specifically for its Moët Hennessy wine and spirits division which will sell experiences as well as products.