How Brands Can Be Effective Advocates

Championing values has become one of fashion’s favourite marketing tools. But as brands get more political, they also have an opportunity to drive real impact.

How Brands Can Be Effective Advocates

Championing values has become one of fashion’s favourite marketing tools. But as brands get more political, they also have an opportunity to drive real impact.

Chanel turned its catwalk into a demonstration for its Spring/Summer 2015 show. Getty Images.
Sustainability
Share
Comment
BoF Professional Exclusive
By Rachel Deeley May 17, 2021 04:30

Earlier this month, a group of nearly 40 fashion brands, advocates and fashion insiders sent a letter to the US Federal Trade Commission asking it to review the guidelines governing what can be marketed as sustainable.

It’s an unusual move in an industry that has thrived on self-regulation, but fashion is getting more political.

The letter was organised by advocacy group Politically In Fashion and denim brand Amendi, which bills itself as focused on transparency and responsible design and production. Lobbying the US government for tougher oversight of which companies can say they’re behaving responsibly and when is both on-brand and in Amendi’s interest. The current lax guidelines make it harder for companies trying to operate more responsibly to demonstrate that to consumers.

“If you’re trying to operate in [this] space genuinely, you’re going to lose to the guy with deep pockets,” said Amendi co-founder Corey Spencer. “The only way to [compete] is to level the playing field.”

Amendi is part of a growing cohort of brands that have built engagement with consumers through a promise of ethical and sustainable practices. Now they’re beginning to use their platform to advocate for wider change within the industry. Some, like Amendi, are lobbying for regulatory shifts, while others are focusing on sharing their learnings and demanding better from larger peers.

It’s a powerful way to help brands stand apart at a time of intense political and cultural upheaval, when many consumers want to feel the labels they support are fighting for causes of social justice and climate. But at a time when more and more fashion companies are using the language and imagery of protest, does brand advocacy really lead to change or is it just another marketing tool?

BoF examines how brands can make their messaging count.

Give Your Messaging Meaning

Two years ago, Swedish menswear brand Asket daubed a wall in a bustling Stockholm shopping district with the words ‘Fuck Fast Fashion,’ an eye-catching campaign that took aim at big and polluting mass-consumption brands. (Asket positions itself, by contrast, as a slow-fashion label, dedicated to encouraging people to buy fewer, but better, items of clothing.)

It’s an example of the simplest way a fashion brand can advocate for change: using its platform to raise awareness. But that can also become an easy and performative marketing ploy, with little real impact. The number of brands posting black squares and statements of solidarity for the Black Lives Matter movement in 2020, only to be called out for their treatment of Black employees and customers, is a key example.

Messaging that helps move the conversation forward can be more effective. Asket is moving beyond attacking what it says others in the industry are doing wrong, to share more information on what it’s learned about trying to do things better. It publishes an annual report outlining its progress towards operating more sustainably, and earlier this year it published a white paper summarising more than 18 months of research into more sustainable packaging options. It’s also signed the letter sent to the FTC earlier this month. 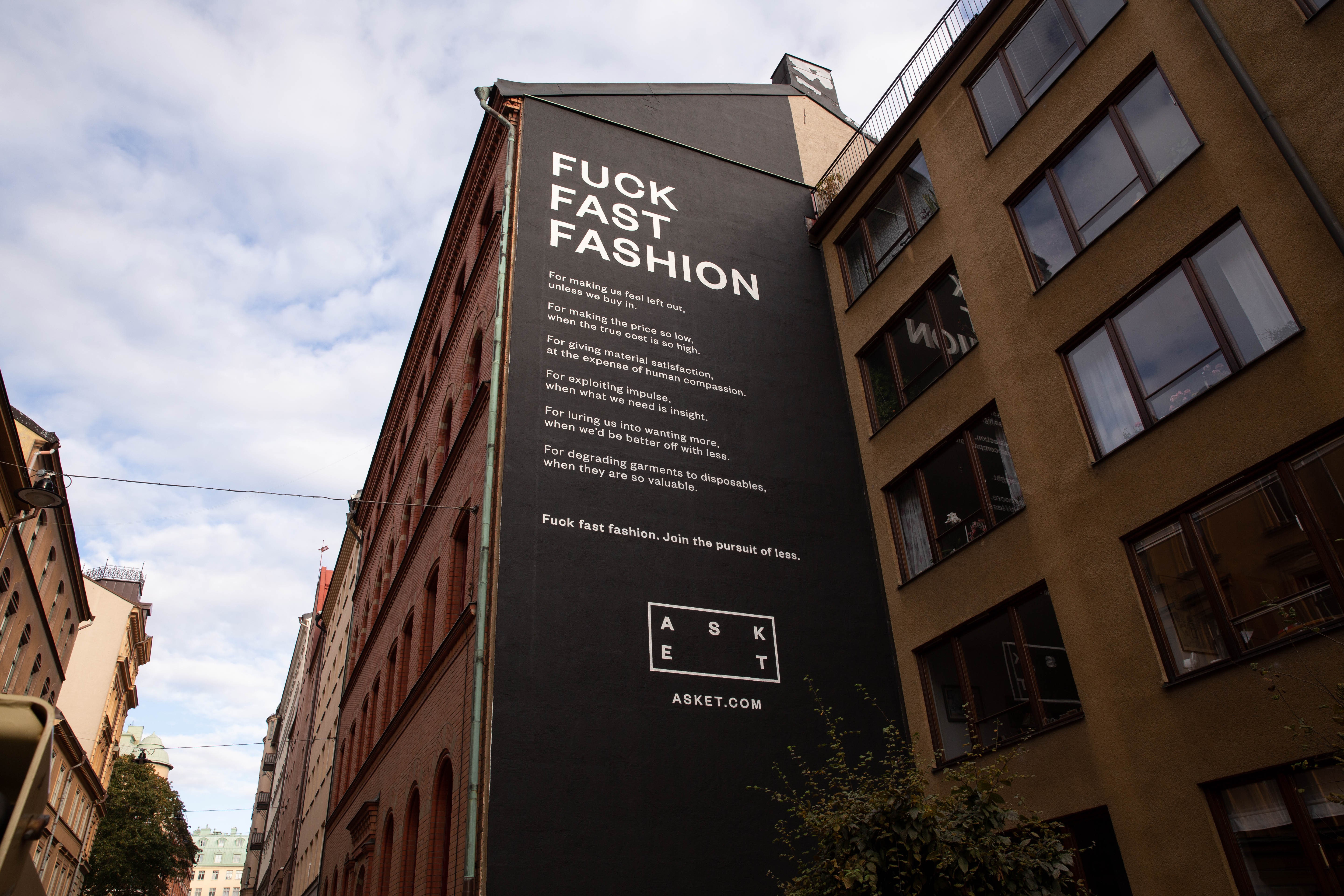 By making better business practices easier and more accessible, it becomes harder for laggards to plausibly avoid adopting them, said Harriet Vocking, chief brand officer of sustainable advocacy and communications agency Eco-Age. Asket said brands across a range of sectors — from children’s wear to interior design — have reached out for more information, or to say they applied the report’s methodology to their own operations.

These kind of disclosures are “proving that it can happen, and it does happen,” Vocking said. “That excuse of, ‘Oh, it’s just really complicated’... doesn’t stand up anymore. If you really wanted to change as a business owner, you can.”

On the other hand, brands that try to use the language of advocacy simply as a tool of self-promotion are increasingly facing a consumer backlash.

“I think that consumers can see beyond the people who try dip their toe in,” said Aurora James, founder and creative director of footwear brand Brother Vellies and founder of the 15 Percent Pledge, which calls on American retailers to increase their representation of Black-owned businesses. “It’s either part of your brand ethos, or it’s not.”

Have a Clear Goal

Real impact is most achievable where brands or their founders push beyond vague calls to action, and instead throw their weight behind commitments with tangible outcomes or resources.

James launched the 15 Percent Pledge last summer following the murder of George Floyd. The non-profit is distinct from her brand, but gained traction in part thanks to her profile. “I don’t know that, as someone who has been blessed enough to have a successful business, that I was willing to squander my platform while there were people who look like me who were suffering,” she said.

For James, it was important to make the terms of the pledge both tangible and realistic. Signatories commit at least 15 percent of their shelf space to Black-owned businesses, a proportion roughly equal to the Black population in the US.

“There’s no reason why someone can’t commit to the pledge, because this is not something that we’re asking any of these major retailers to do overnight,” she said. “It’s going to take years in order to actually find the businesses that are the right fit for all of these retailers, onboard them in the right way, and make sure that they have the support to be successful on the shelves.”

The pledge has garnered signatories including Sephora, Macy’s and Rent the Runway, and its widespread media coverage has sparked wider conversations about the historic exclusion and barriers facing Black entrepreneurs.

Regulation is often seen as a scary or dirty word, so I understand that people may want to avoid going down that path, but I think the landscape has changed now,

Campaigns can also push to improve existing initiatives or regulations. Politically in Fashion and Amendi’s letter to the FTC, for example, calls for “a comprehensive review” of the commission’s Green Guides, which advise marketers on how to talk about environmental claims without being deceptive, but haven’t been updated in years.

The Green Guides are a “concrete” starting point, said Politically in Fashion founder Hilary Jochmans. “Let’s address that, and then we can build on it in bigger and broader initiatives as well.”

The FTC said it evaluates all feedback, but has not yet received the letter.

Focused, informed campaigns can have outsized impact when given the boost of fashion’s cultural platform. But the most powerful initiatives are those that reach outside the scope of a single brand to build collaboration across the industry, move the conversation among consumers and build momentum for change at a political and regulatory level.

“Regulation is often seen as a scary or dirty word, so I understand that people may want to avoid going down that path, but I think the landscape has changed now,” said Jochmans, pointing to US President Biden’s environmental agenda as a sign change is coming, whether fashion embraces it or not. “I don’t want to see this opportunity pass the industry by, because something’s going to happen. Why not have a seat at the table?”