NEW YORK, United States — In 2015, Nike set the ambitious goal of nearly doubling the size of its business in just five years. That's $50 billion in annual revenue by 2020, implying a compound annual growth rate of roughly 10 percent. That same year, the company also set a moonshot goal of halving the environmental impact of the products it sells by reducing waste, using renewable energy and shrinking its carbon emissions.

Today, to coincide with the start of Climate Week in New York City, the American sportswear giant is introducing its latest “super material” — Flyleather — engineered specifically with the company’s long-term business and sustainability goals in mind, and manufactured in partnership with UK-based firm E-Leather.

The material is made with recycled leather fibres that are melded together with a polyester blend, allowing for more flexibility than traditional leather. Leather waste — scraps and the like — is crumbled into fibres, then formed into a paste with the power of water jets. That paste is then rolled into sheets of leather, and any scraps that remain after cutting are added back to the scrap heap, creating a closed-loop cycle.

“If you look at our entire environmental footprint, 60 percent is linked to the materials that we use,” says Hannah Jones, Nike’s chief sustainability officer and VP of innovation. Leather, in particular, has “disproportionate” environmental consequences, says Jones. While it is only Nike's tenth most-often-used material, it has the second-highest negative environmental impact.

But while Nike’s sustainability goals are a major talking point for the brand, the performance benefits of Flyleather were a driving factor in the development of the material. “Figuring out zero waste is critical, but at the end of the day, the question is: How can we obsolete the past?” says Jones. “We can never put something into the market that we think compromises performance or aesthetic or price, because we believe to do that is to do a disservice to sustainability.”

This goes some way towards explaining why leather has always been a “thorny issue,” as Jones says, for Nike. Many athletes — in particular, soccer players — are reluctant to abandon the material. Then there's aesthetics. “Whether it’s your handbag or a pair of brogues, it wears nicely. It wears to you; it has a smell and a feel. It’s premium," says Tony Bignell, Nike's VP of footwear innovation.

If you were running a portfolio of startups, this would be your unicorn.

Flyleather, Nike says, is 40 percent lighter than traditional full-grain leather, as well as five times stronger. (Strength, in this case, is tested with abrasion, considering how much roughness the material can take.)

Bignell pulls out a mock-up shoe, showing how Flyleather and Flyknit, a recycled polyester yarn knitted together to create a fabric, could be fused together on uppers, or how Flyleather can be thickened in certain areas, or thinned out in others, depending on comfort and durability requirements. To achieve a similar effect when working with traditional leather, designers typically add reinforcements, which increases a shoe’s weight and environmental impact.

“Imagine you have the strength where you need it but you might have this nice supple feel; you could also have stretch built in. You might need to build in breathability with extra strength but also some really nice soft area for your toes,” Bignell says. “It gives you a whole new visual aesthetic too, and it’s really purposeful. Before it was just layering things up and doing a stitch pattern.”

Flyleather also links to Nike’s long-term business goals: It reduces waste, which will potentially save money over time, and it may also allow the company to further penetrate certain categories. The ongoing casualisation of culture offers new opportunities for Nike to ramp up on leather-based lifestyle goods. But Nike will have to convince consumers that Flyleather is more comfortable — and wears just as well, if not better — than the real thing.

Nike also hopes to use Flyleather in a range of performance categories, which means convincing athletes that Nike has built a better, stronger leather: one that will outperform traditional leather. The company commissioned SGS — a leading inspection, verification, testing and certification firm — to conduct an independent abrasion test for Flyleather against three full-grain leathers used in performance products. Each leather was "abraded" over 5,000 times, and inspections were conducted every 1,000 cycles, assessing for both vision wear and thinning out of the material. According to the results, Flyleather is five times more durable than those three types of full-grain leather.

And yet, Flyleather still isn't where it needs to be in terms of look and feel. For instance, “Kangaroo leather is what they use in soccer boots. It’s super thin, super supple. It’s like a really soft cheese and has a unique hand feel to it,” Bignell explains. “This isn’t here yet. We’re constantly thinking, how do you do that — and better?” 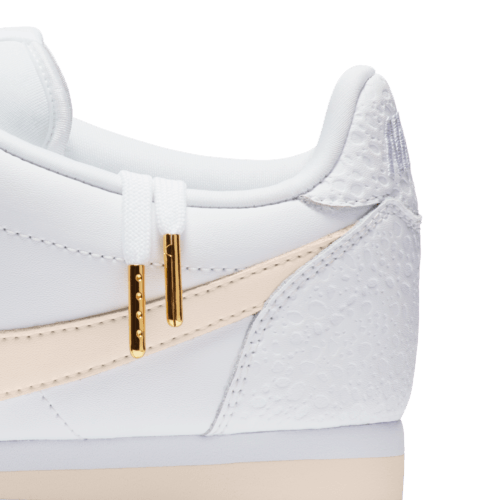 The first Flyleather style, an $85 version of the Tennis Classic, is available to purchase at Nike.com and at the brand’s flagship and Nikelab stores in New York’s SoHo neighbourhood, as well as Dover Street Market, starting September 18. Designs are only available in white and black for now; colour will potentially come as development continues.

Nike has also created limited editions of the Air Force 1, Air Max 90, Cortez and Jordan 1 in Flyleather, which will be on display in New York during Climate Week. Consumers can enter win those via Nike.com through the end of September, although a commercial role out of those products has not been announced.

It’s a modest introduction, and Jones and Bignell say they have not set any goals in terms of sales or market penetration. However, it’s clear that they hope Flyleather will reach Flyknit levels of success. (The material spurred Nike’s net income to jump 40 percent in the three months after it was introduced in 2012. It is now used across multiple categories.)

“It’s actually dangerous in innovation to set a goal too quickly because you constrain thinking and make bad decisions,” Jones says. “We’ve just had our minds blown about what we can do with this and the impact it can have. Do I want to see this go to significant scale commercially? Can we disrupt leather? Yes. Can we do it in service of our consumer? Yeah, I want to be asking that question.”

“How often do you manage to get sustainable, performance and aesthetic in one go?” Jones continues. “If you were running a portfolio of startups, this would be your unicorn.”

But while Flyknit had unique visual appeal, Flyleather mimics the look of traditional leather and marketing an invisible-to-the-eye technical innovation is a challenge. “Flyknit is primarily an aesthetic attribute,” says Matt Powell, sportswear industry analyst at NPD Group. “We are in the golden age of technology. There are so many great ideas coming up it is hard to keep up. That said, technology is not really in fashion right now. We are in a true sportswear cycle now.”

Flyleather comes as Nike faces increased competition from the likes of sportswear rivals Adidas and Under Armour and is placing greater emphasis on its direct-to-consumer channels. Last year in North America, a key market, sales to wholesale partners rose just 1 percent, while direct sales grew by 9 percent. Nike also plans to sell certain products directly through Amazon, as well as Instagram.

In June 2017, the company announced that it would cut 2 percent of its global workforce, or 1,400 jobs. It also aims to cut the average cycle time for creating a new design in half.

In its 2017 fiscal year, Nike generated $34.4 billion in revenue, up 6 percent on a reported basis, with earnings per share up 16 percent and the return on invested capital up nearly 35 percent. To reach that $50 billion goal, Nike's sales will need to accelerate over the next three years.