A new report has found that progress on child labour in major manufacturing countries has stalled, with production of raw materials a particular risk for fashion companies.

LONDON — Progress tackling child labour in global supply chains has stalled, according to a report published Thursday, with the problem still a major risk in countries that serve as fashion’s most important manufacturing hubs.

Verisk Maplecroft’s annual Child Labour Index found that China, India, Bangladesh, Vietnam and Cambodia have registered no tangible improvement in the risk consultancy’s ranking of 198 countries since 2016. The index is designed to allow companies to identify the areas in their supply chain where they are most likely to risk falling foul of efforts to prevent child labour. It’s based on analysis of the frequency and severity of violations, countries’ adoption of laws and international treaties, and their ability and will to enforce them. 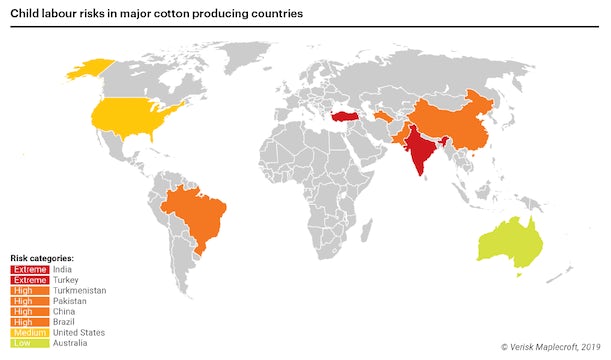 The fashion industry has struggled for years to tackle child labour and modern slavery within its supply chain, which remains complex and opaque. Many companies have made progress, tightening their ethical standards and conducting more frequent and rigorous factory audits. But problems persist, particularly further down the supply chain, where many companies have little visibility.

Production of raw materials like cotton and silk are a particular risk for brands. Few retailers are able to trace the origin of the material they use back to the farm, making it difficult to monitor. At the same time, agriculture is one of the highest-risk sectors for child labour.

For instance, India — the world’s leading producer of cotton and second-largest producer of silk — is considered an extreme risk for child labour in the production of both commodities, according to Verisk Maplecroft. In fact, six of the eight cotton producers the consultancy scores for child labour risk are considered high-risk or greater. The US and Australia are the only countries where widespread, direct evidence of violations were not present, it said.

Other key materials used by the industry are also considered high or extreme risk, including cashmere from Mongolia and rubber produced in Indonesia, Malaysia and Thailand, Verisk Maplecroft found. The only natural material commonly used by the industry that does not have widespread links to child labour is wool, it said.

The Case for Radical Transparency