Can Technology Solve the Fit Problem in Fashion E-Commerce?

According to studies, between twenty to forty percent of all clothing purchased online is returned, often due to issues with fit, costing fashion e-tailers millions. A host of tech start-ups are aiming to solve the problem. But is a technical solution the most effective approach?

LONDON, United Kingdom — Having to return ill-fitting clothing purchased on a website can be a uniquely disappointing experience. After shopping for a garment you want, you wait — a day, a week, sometimes more — and finally receive your order, carefully wrapped in tissue paper or plastic. Excited and optimistic, you slip it on… only to find that it doesn’t fit. It’s too loose or too tight, or perhaps doesn’t fall the way you had imagined. You put it back in its box with a dispirited sigh and request a pick up — or worse, plan a trip to the post office.

Returns stemming from poor fit are also a major pain point for online retailers. In recent years, fashion and apparel has become the fastest growing e-commerce category and the second largest after consumer electronics, but fit-related returns cost fashion e-tailers millions, not only in terms of lost revenue but also because of the expense associated with shipping and processing them. “Usually the return rate for an online retailer is going to be 20 to 30 percent,” said Sucharita Mulpuru, vice president and analyst at Forrester Research, a global research and advisory firm. “[As a retailer], you may have paid for outbound shipping, sometimes you’ve also paid for return shipping — and some of those items may now be worn and not eligible for resale.”

A bevy of start-ups have set their sights on solving the problem, offering fit guidance solutions that better match consumers with correctly fitting garments. Some, like TrueFit, which works with Macy’s and Nordstrom, leverage algorithmic solutions to analyse fit data and recommend which size a consumer should select. Others, like Metail and Fits.me, have developed digital fitting rooms that use virtual mannequins to mimic a shopper’s dimensions and display what a certain garment might look like when worn. Still others rely on shoppers to input their own measurements, matching this data with specific garments. 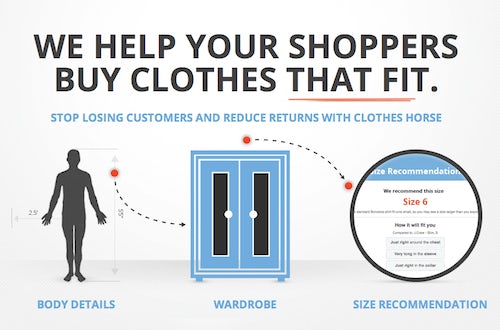 Millions of dollars of funding, from both venture firms and strategic investors, has been poured into what has become a fairly crowded space. In April 2013, Fits.me raised a $7.2 million Series A round (bringing the total amount of capital the company has raised to about $10.5 million) just weeks after fashion e-commerce giant Myntra bought San Francisco-based Fitiquette for undisclosed sum. Companies like New York-based Clothes Horse and Stockholm-based Virtusize have also raised undisclosed amounts of seed funding.

And the money keeps coming. Last December, London-based virtual fitting room start-up Metail raised another £2.6 million (about $4.4 million). In March, Ebay acquired the 3-D visualisation and modelling start-up Phisix. And, as recently as June, Copenhagen-based Fitbay raised $2 million in seed funding from Steadfast Venture Capital and Creandum, an early investor in Spotify, while TrueFit raised $10.6 million, according to a US Securities and Exchange Commission filing.

But, so far, nobody has unearthed the silver bullet. Why?

Fit solution companies routinely emphasise the need for tools that are low-friction, easy-to-use and engaging. But many of the existing solutions on the market still rely heavily on user-provided data to surface size recommendations and suffer from low adoption.

“You’re seeing sub three percent adoption rates. All they’re showing is that they can take the cream off the top. It’s always going to be the most engaging users who are going to click on new technologies,” said Tom Adeyoola, founder and chief executive of Metail.

Metail is hoping that the right combination of accurate technology and cost-efficient implementation for retailers will drive adoption, but the company first needs to convince retailers that the tool works. It has already seen traction in emerging markets like Brazil and Southeast Asia, but this is largely driven by the tool’s value as a consumer engagement device. “In Brazil, you’re talking about an environment where there is sub-three-percent return rate and it’s about social. We’re building an engaging social tool. In the EU, we need to build an equivalent case based on ROI,” admitted Adeyoola.

Arduous or Costly For Retailers

Fit guidance solutions can also be costly and frictionful to implement and operate. Metail partners with companies like Dafiti in Brazil and Warehouse in the UK to photograph clothing and render outfits in a realistic way on its virtual mannequins. But this process currently costs retail partners £9 (about $15) per garment (the company is working on reducing this number to £3 per garment).

To produce accurate results, fit recommendation algorithms also require heavy and consistent input of measurement data. “Recommendation engines need a lot of input in order to be efficient,” explained Gustaf Tunhammar, chief executive and co-founder of Virtusize, which works with retailers like ASOS and Zalora, and allows shoppers to see how specific garments might look based on their personal measurements and what they already own.

“Fast fashion is a reality today with thousands of new products being launched each week; we believe it will be hard to gather enough data quickly enough to come up with accurate fit recommendations. Finally, to produce accurate 3-D renderings, you need a lot of data, which is costly for the retailers,” Tunhammar continued. Virtusize tries to skirt the issue by parsing production data from its partners.

“We can’t communicate results from specific clients, but when used, Virtusize typically reduces the return rate by 25 to 50 percent. The usage varies between retailers, primarily depending on how much they choose to promote the service,” added Tunhammar.

“If you are an ingrained user who is used to buying three garments [in order to try on multiple sizes and return those that don’t fit — at significant cost to the retailer], the first time you use a new technology, you’re probably still going to buy three. The marketing has to be aligned to encourage you to go with the recommendations that were put forward,” said Adeyoola.

In A/B testing with retail partners like Frank & Oak and Nicole Miller, Clothes Horse drove a lift in sales of 8 percent and a reduction of returns by 9.5 percent. “Where you’re more likely to see different results is not based on gender or product categories, but some of the nuances that might be timely, like a retailer that’s doing a lot of promotion or a bump in exposure — those things have a more readily visible impact on usage,” said co-founder Vik Ventrakaman.

Technical solutions like digital mannequins and data-driven fit recommendations may have advanced in recent cycles, but according to Mulpuru, simple alternatives like customer ratings and reviews — even accurate sizing charts — can go a long way towards helping shoppers make better fit decisions, reducing return rates for retailers.

“We are trying to slay a deer with a nuclear weapon here,” said Mulpuru of some of the more technically advanced solutions on the market. What’s more, the landscape is highly fragmented, with a slew of different solutions being deployed and tested at a wide range of retailers, making things frictionful for end consumers.

“The perfect solution would be where you’d input your dimensions once and, in a Google search, you’d be able to find out, ‘Here are things that we think would fit you that are available and in stock now.’ A lot of these companies are doing one-off engagements with retailers and consumers don’t have enough interaction with these retailers to make it all that useful.”

“The idea of fit and what’s the right fit is as much subjective as it is scientific,” she added. “I don’t know that you need a technology company, big or small, to solve that problem for you.”