Almost one month after its blockbuster IPO, the fashion unicorn dropped below its debut price of $20 per share in intraday trading.

The company, which connects a curated network of boutiques and brands to consumers worldwide via its technology platform, received an enthusiastic reception when it debuted on New York Stock Exchange on September 21, pricing above its predicted range at $20 a share and then shooting up to close at $28.45 that day. At a market capitalisation of over $8 billion, Farfetch was instantly vaulted into the ranks of the world’s elite fashion technology companies, surpassing the €5.3 billion ($6.1 billion) valuation attached to Yoox Net-a-Porter when Richemont acquired it earlier this year.

Since, shares have been sliding. This week the decline accelerated, with the stock falling as low as $18.39 Wednesday morning. Shares ended the day at $20.76. Farfetch declined to comment. 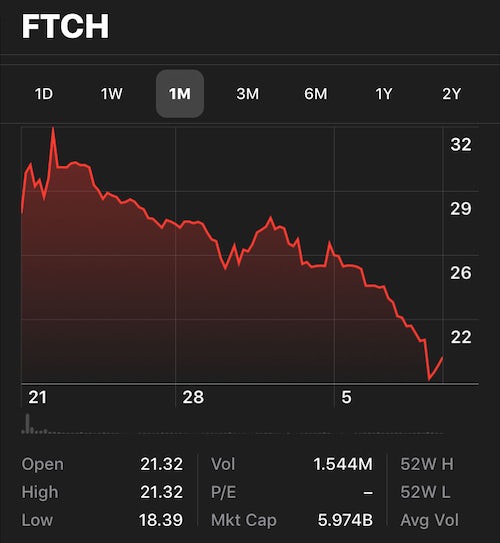 It’s not uncommon for shares of newly public companies to dip after investors’ initial excitement wears off. Of the 191 companies to hold US IPOs this year, 70 were trading below their debut price as of Monday’s close, according to Dealogic.

Plus, the ongoing trade spat between the US and China has cast uncertainties around consumer luxury spending in both regions. “Considering the new concerns about cross-border transactions, the sell off in the stock markets, and in particular in the luxury sector, it is not surprising [to see] a correction of Farfetch share price after the buoyant listing,” said Mario Ortelli, managing partner of luxury advisors Ortelli & Co.

Fusing retail and technology, Farfetch operates a marketplace model free from physical assets like warehouses and stores that often weigh down retail margins. And it's growing fast at a time when e-commerce sales of luxury goods are on the rise. Online luxury goods sales hit $27 billion in 2017, up 24 percent from the year prior, according to Bain & Company. But Farfetch has yet to turn a profit: last year, despite revenues jumping 60 percent to $386 million, the company amassed losses of $112 million, partly due to increased investment in its technology.

“It hasn’t even been a month since the IPO so shouldn’t be anything alarming,” said Forrester analyst Sucharita Kodali. “Probably a lot of investors cashing out is my guess.”

Farfetch is caught up in a broader US stock market decline that has hit tech stocks particularly hard. The e-commerce company’s IPO took place the day after the S&P 500 index hit a record high, and US stocks have fallen steadily since then, with losses accelerating this week over concerns that rising government bond yields will raise borrowing costs. The S&P 500 was down 1.4 percent on Wednesday, its fifth consecutive daily drop and longest losing streak in two years.

The rally and subsequent fall was even bigger in the tech sector, with shares of industry giants like Amazon, Facebook and Netflix as well as fashion-tech startups like Stitch Fix soaring this year as investors piled into fast-growing companies that stand to benefit the most from the strong economy and cheap financing. Since their September peak, Stitch Fix shares are down about 50 percent, while even Amazon is off by about 10 percent.

That earlier exuberance helps explain why Farfetch shares leapt by roughly 50 percent on their debut, with investors focusing on rapid increases in customers and revenue while setting aside concerns about widening losses. Rising interest rates would potentially hit money-losing companies hardest, as they are more reliant on raising outside funding to pay for expansion and day-to-day operations. Farfetch likely won't need to borrow anytime soon after raising over $800 million in its IPO, though the company  noted in a pre-IPO regulatory filing that rising interest rates could hurt its business by squeezing consumer spending.