The Fashionable Rise of Tumblr

NEW YORK, United States — According to comScore, microblogging platform Tumblr hit an “inflection point” sometime last June. Page views on Tumblr.com — which lets users create mixed-media blog posts with the kind of extreme simplicity and immediacy not found in traditional blogging platforms — began to surge. By October 2010, page views in the U.S. were up a staggering 1,540 percent from the year before. According to the New York-based company, Tumblr now has 47 million unique visitors per month, 2.7 billion page views per month, and over 9 million users, with approximately 30,000 new users joining the platform every day.

With numbers like these, it’s no wonder that Tumblr — which has been compared to Facebook and previously attracted just over $10 million from Spark Capital and Union Square Ventures (both key investors in Twitter) — was recently able to raise between $25 million and $30 million in additional financing, valuing the business at an estimated $135 million. Famed Silicon Valley VC firm Sequoia Capital was the lead investor. “I will say, it is nice to be well-received on the West Coast,” Tumblr’s president, John Maloney, told Business Insider.

Interestingly, Tumblr has been very well-received in the fashion community, as well, giving rise to a universe of fashion-related microblogs. “Over the past year, fashion has emerged as one of the fastest growing segments of the Tumblr community, with 20% of our top 1000 blogs related to fashion,” said Rich Tong, a co-founder of Weardrobe (sold to Like.com in 2009) and Tumblr’s new fashion director.

It's not surprising then that Tumblr founder David Karp told TechCrunch last week that Tumblr wants to be “the best place in the world for the best creative communities," with fashion at the core of this focused strategy. 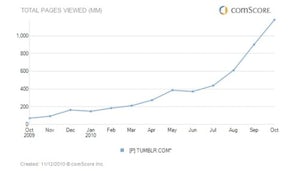 Many of the most popular fashion Tumblrs are personal style blogs like whatiwore and triciawillgoplaces, vintage and craft-focused blogs like psimadethis and hawtvintage, and street style blogs like fuckyeahstreetstyle and lookbookdotnu, launched by the eponymous look-sharing site. But a recent post on Refinery29 entitled “The Best Fashion Tumblrs To Follow Now” reflects the striking diversity of fashion blogs that have sprung up since the platform was launched in 2007. The list includes shoelust, theimpossiblecool, and textbook, a Tumblr dedicated to answering the question “What would Holden Caulfield wear?”

On one level, Tumblr has struck a chord with the fashion community because, like fashion itself, the platform is both immediate and highly-visual. While Tumblr posts can be text, images, quotes, links, chats, audio clips or videos, 50% of all posts are photos. “As a platform Tumblr is almost purely visual,” said Francine Ballard, founder and editorial director of DesignerSocial, an online showroom that operates a Tumblr. “Most of what gets reblogged is prompted by a sort-of visceral response. So by definition, it has the potential to be a fantastic medium for fashion.”

Indeed, Tumblr has found particular resonance amongst fashion creatives, who use the platform to aggregate and share the inspiration they find online. “I use Tumblr as a way for my creative team to share things that they are inspired by,” said Diana Hong, creative director at digital fashion agency CreateThe Group and an early adoptor of the platform.

Tavi Gevinson, best known for her blog The Style Rookie, also maintains a microblog called Slow Motion Crawl, which she migrated from Blogspot to Tumblr early last year. “It’s much more informal, more for archiving and self-reference than anything else. My favorite thing is how convenient it is for storing inspiration — when I compile images for a post on Style Rookie, I usually find them all in my Tumblr archives.”

But as well as being radically visual, quick and convenient — a Tumblr bookmarklet, as well as Tumblr mobile apps for Blackberry, iPhone and Android, make it incredibly simple to share content — Tumblr is fundamentally different from traditional blogging platforms because it comes with a built-in community. On Tumblr, users can “follow” and “reblog” other bloggers, whose posts appear in realtime streams on a Tumblr “dashboard,” much like on Twitter.

“It’s so addictive because you follow your favourite Tumblrs, which give you the best of the internet, so you just keep clicking through your dashboard and finding more and more that you like,” said Tavi.

“Tumblr seems to now have an audience of regular users and we decided it would be beneficial to drive traffic back to the site, as well as being a source of inspiration,” said Alistair Allan, digital director at Dazed Group, which operates popular fashion, art and music website Dazed Digital and, last month, launched dazeddigital.tumblr.com, a Tumblr that highlights favourite items from Dazed Digital each day.

“Many publications primarily care about Tumblr as a traffic driver, but we’ve noticed that the ones who use Tumblr to express a point of view are the ones who succeed within the community,” said Tumblr's Mr. Tong, commenting on the Dazed Digital offering. “Once they do that, the traffic takes care of itself.”

Notably, Tumblr has managed to attract a passionate community that’s largely composed of young and influential, design-focused people. For fashion media brands, this is an extremely attractive, high-value demographic who have an almost insatiable appetite for content and share their discoveries with their social graph, both on Tumblr and across the web. “Our community loves original content — and loves reblogging it straight from the source,” said Mr. Tong.

Conveniently, a Facebook app and publish to Twitter feature neatly integrate Tumblr into the two most important social networks on the internet, enabling the platform’s influential userbase to easily distribute content to friends and followers.

It’s no surprise, then, that major fashion publishers like Vogue and Elle have recently launched Tumblrs. “The demographics of the Tumblr audience are very much in line with the demographics of our readers: typically young, fashion-minded people with a strong appreciation for pop culture,” said Keith Pollock, editorial director of Elle.com.

The platform also allows fashion media brands to speak to consumers in a softer, more personal tone. “Tumblr provides a great opportunity for brands and publishers to step out of their strict editorial guidelines and create a down to earth, approachable voice,” said Mr. Tong. What’s more, Tumblr makes it easy to establish the kind of genuine reciprocal relationships that turn fans and followers into brand loyalists. “By following users you think create great content, liking their posts and reblogging their content as well, you establish a very passionate and loyal following,” explained Mr. Tong.

But it’s not just media companies who are getting in on the action. LVMH-backed ethical fashion brand Edun operates a Tumblr called Eye of Edun, where the company shares behind the scenes imagery and visual inspiration. “Tumblr is embraced by artists and creative communities more so than other blogging platforms,” said Edun’s brand director Bianca Barattini. “Edun.com tells our entire story, from backstory to mission and offers a shopping experience, while the Tumblr is purely inspiration.”

But it may not be long before fashion brands start to integrate commerce into their Tumblrs. Last Thursday, a small startup called Of a Kind, which offers limited edition items from emerging designers, became the first store to launch on Tumblr. “Building our site on Tumblr seemed like an obvious move — it has allowed us to put our content in front of early adopters in a place where they were already congregating,” said co-founder and president Erica Cerulo. Tumblr does not technically support e-commerce, but Of a Kind was able to easily connect their Tumblr to Shopify, a simple digital commerce app, to offer a fully shopable experience.

Asked if Tumblr would be adding e-commerce functionality in the future, Mr. Tong responded: “We haven’t yet pursued supporting that feature set, but given the virality of our network, we’re definitely exploring ideas on how best to integrate the e-commerce component into our user experience.”

With the possibility of commerce-enabled Tumblrs on the horizon, the existing opportunities for content distribution and audience engagement, and the minimal time and effort it actually takes to start blogging on Tumblr, we suspect it won’t be too long before smart fashion brands see Tumblr as an indispenable tool in their social media arsenal, alongside Twitter and Facebook.

If fashion and creative communities are at the heart of Tumblr, BoF must be there too. You can now follow us on Tumblr: businessoffashion.tumblr.com

Vikram Alexei Kansara is Managing Editor of The Business of Fashion.