What The Independent Article Didn't Tell Us

LONDON, United Kingdom — A veritable firestorm erupted across fashion blogs and twitter streams this week in response to an article that appeared in London's Independent newspaper over the weekend, highlighting Tavi Gevinson's front row presence at the haute couture shows in Paris.

In a piece entitled "Fluff flies as fashion writers pick a cat fight with bloggers," The Independent reported that "senior fashion insiders believe blogs have turned into little more than mouthpieces for fashion brands, which are increasingly using bloggers to regurgitate their press releases."

As those controversial words rippled through the blogosphere and twittersphere, the protest and outrage came from all quarters of the fashion blogging fraternity and sorority. And, while we at the BoF were hesitant to take the bait and join the fray — the whole 'editors versus bloggers' story is becoming tired — it would be even worse for us to remain silent. Indeed, the Independent article raises very important issues which merit further discussion and debate, and perhaps, a more balanced perspective on this so-called "backlash" against bloggers.

In fact, this is exactly what I said when I was contacted for quotes on the Independent piece — quotes which were ultimately not used. As it turns out, several other bloggers were also asked to comment, including Susie Bubble and Helene of The Luxe Chronicles, but none of their quotes were used either. In fact, not one blogger was directly quoted to provide comment on the other side of the story. The result is an article that comes across as very black and white, on an issue that actually has many shades of grey. We are only at the very beginning of the digital revolution that is sweeping across the fashion industry. And so, to only show one side of the story does readers, and the industry as a whole, a disservice.

In the spirit of adding to the dialogue and providing a more balanced perspective, here's some food for thought.

First, most bloggers worth their salt operate with integrity and professional values. This is not to say that bloggers are beyond reproach. There are always some bad apples in the bunch, in this case, those bloggers who accept products in exchange for positive coverage or special treatment. However, smart bloggers recognise that if they lose their independence, they will quickly lose the trust of their audiences. Simply being a mouthpiece is a short-term strategy. 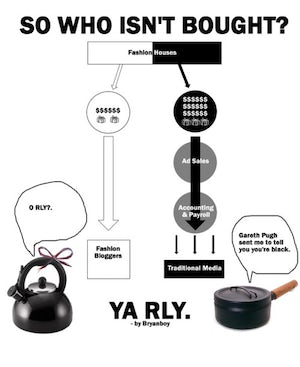 So Who Isn't Bought? | Source: Bryanboy

Second, for editors from the mainstream media to hold bloggers to a different standard than that to which they hold themselves, is hypocritical. As one fashion insider told me, more than ever, major fashion editors are putting advertisers front and centre in their fashion editorial, giving smaller independent brands a miss.

"By and large, the way that bloggers respond to brands still results in content that isn't unlike a traditional advertorial or 'bought copy' seen in magazines," said Susie Bubble, author of one of the world's most widely read fashion blogs, to the Independent, in quotes that she kindly shared with me but weren't used in the piece.

"It is up to the blogger how they handle it and how they portray themselves.  They are accountable to their readers and if they choose to do something that strikes [readers] as being biased or 'bought by brands,' then they have to suffer the consequences," she concluded.

This is more important than ever before. Now that brands have cottoned on to the influence that bloggers have, they are doing everything to seduce them and win their approval.

In theory, there is nothing wrong with bloggers building relationships with brands and gaining special access. But, if these relationships become so cozy that bloggers stop saying what they really think, they risk losing the audiences that have grown to love them. The trick for bloggers, therefore, is to maintain healthy relationships with the brands, while also staying true to their audiences — it's a fine balance.

Finally, we must all be aware that the tensions we're seeing simply reflect the growing pains of a new medium that’s only just finding its way. As Vikram Alexei Kansara, Managing Editor of BoF said, "Like them or not, bloggers are here to stay and should be recognised as the powerful and significant 'Fifth Estate' that they are. Today we are at a moment that’s not unlike the invention of the Gutenberg press. It took hundreds of years for print media to evolve beyond biased pamphleteering, so why should they expect blogging to mature over night? If anything, I would argue that blogging is maturing much faster than print ever did!"

For her part, Susie Mesure, the author of the controversial article, said "the story ended up being much shorter than initially envisaged so I couldn't use all the comments. Writing in a paper is not like writing online as I am constrained by the word limit set by my editor. I would have liked to use all the comments I received as they were very interesting. Hopefully I may yet get the chance."

Indeed, all of the bloggers I spoke to said that their conversations with Ms. Mesure were pleasant and interesting. Even though she may have had an preconceived agenda in mind, she was asking all the right questions. It's just too bad she wasn't able to share the answers.

In the end, as Helene Le Blanc of Luxe Chronicles said, "it would be a far more productive debate if, rather than sniping at bloggers such as Tavi, journalists and editors actually engaged bloggers in a genuine dialogue about the state of the industry and the ways in which social media can make fashion a more participative industry."

Hopefully now the mainstream media will turn its focus to discussing and analysing what bloggers are saying, instead of perpetuating the unconstructive 'us versus them' tension. Indeed, contrary to what the article may have indicated, Ms. Mesure is  "a big fan of blogs - fashion blogs and otherwise," she says.  "I do however think there is a danger with readers assuming bloggers are independent when there is so much 'gifting' and 'seeding' going on, which was really the main point I wanted to make."