Live stream shopping is huge in China and a whole slew of startups are bringing the format to the West. | Collage by BoF
Technology
Share
Comment
BoF Professional Exclusive
By Chavie Lieber August 8, 2019 05:20

The 29-year-old, originally from China, was scheduled to go live at 10 am on ShopShops, a live-streaming app where hosts guide Chinese shoppers through American stores. Yang arrived early to scope out the beauty section of the discount department store and by 9:45 had zeroed in on a stash of Shiseido moisturisers that were 60 percent off.

“Century 21 is like a treasure chest, because there are so many discounts, but we have to know exactly how many are available because if we oversell, shoppers will be really angry,” she said, counting the boxes.

At 10:05, Yang popped her iPhone into a selfie stick and began her broadcast:

“Hi everyone! Is anyone here yet?” she said in Mandarin, flashing a wide grin. “I’m Yangyang… and I’m Santa today because I have a full bag of presents for you all!”

Comments, questions, and emojis immediately flooded her screen; nearly 1,000 users were tuning in, along with some curious tourists inside the store. Over two-plus hours, dozens of Chinese shoppers bought products from Perricone MD, Ahava, Ferragamo and other brands. Later that day, another ShopShops team member would go to Century 21, pick up the purchased products and ship them to China. 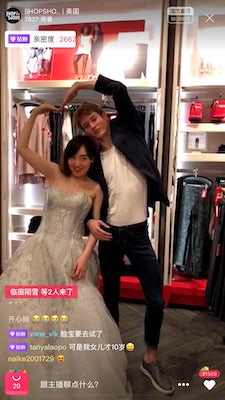 A live stream on ShopShops. | Courtesy

Live streaming is a wildly popular way to shop in China. But the technology is starting to catch on in the US too, and not only with Chinese shoppers looking to snag deals in American stores. A slew of start-ups offer platforms for influencers and regular users to take a spin pitching products live from shops or their own bedrooms. Some already boast millions of American users, mainly teenagers too young to remember the glory days of QVC.

There’s no guarantee live streaming will take off in the US as it has in China, however. The concept flopped when Amazon tried it in 2016, and though home-shopping giants QVC and HSN have had some success with online streaming, it tends to be the same middle-aged and older consumers who watch their television broadcasts.

But with influencers and stores getting involved, live streaming tech could very well hit its stride.

“Live streamers in China are real salespeople and incredibly educated about the products they are selling, but they still leave room for audience interaction so it feels real,” said Lauren Hallanan, an expert on social media in China. “HSN and QVC don’t have that feel because it’s very prepared and they are talking at you. Live streaming tech could be as successful [in the West] if it feels raw to younger customers.”

Taobao, the Alibaba-owned Chinese shopping site, launched live streaming shopping content in 2015. It was an immediate hit in a country where many consumers preferred to buy products based on personal recommendations.

Live streamers in China are real salespeople and incredibly educated about the products they are selling, but they still leave room for audience interaction.

Kuaishou, a live streaming social media platform with investment from WeChat parent Tencent, expects to make $4 billion in revenue this year. Momo, a Chinese dating app that has live stream shopping, made $2 billion in 2018 while Yizhibo, a live-streaming platform popular with Millennials, has nearly 60 million registered users. Mogu, another Tencent-backed live-streaming platform, listed shares on the New York Stock Exchange in December (though the stock’s price has fallen more than 80 percent since).

ShopShops started in 2016 and has $20 million in funding from venture capital firms like Forerunner Ventures, Union Square Ventures and TCG Capital. It currently has 300,000 Chinese-speaking users — a much smaller user base than competitors like Taobao. But it works directly with 350 stores that Chinese customers couldn’t access otherwise, including Opening Ceremony, T.J. Maxx, Everlane and Stadium Goods, with the company taking about a 25 percent commission.

Pano Anthos, the managing director of XRC Labs and an early investor in ShopShops, predicts live stream shopping will explode in the West, particularly with Gen Z-ers who grew up watching YouTubers show off their shopping hauls. Young shoppers are already used to following the style advice of influencers, he pointed out, and so buying from apps where they can buy products directly from an internet personality feels like the natural next step.

ShopShops plans to roll out an English-language version of its streaming service later this year, said Liyia Wu, co-founder and chief executive of ShopShops. It will join other start-ups hoping to take live streams into the mainstream in the West.

The format is not easy to master, though, particularly in the US where conventional e-commerce is more entrenched. In 2016, Amazon launched a live-streaming show called “Style Code Live,” which it cancelled a year later. A second attempt, Amazon Live, debuted in February. Its shopping shows feature brightly-lit sets and talking heads with perfect blowouts.

Qurate Retail Group, which owns QVC and HSN, reported revenue of over $14 billion last year. Though best known for their television channels, 62 percent of Qurate’s US revenue last year came from online streams. However, the age range of a typical Qurate shopper is 35 to 64 years old.

Dote, a social e-commerce app popular with teens, earlier this year introduced Shopping Parties, where users can host 15-minute live shopping events. A split-screen shows influencers talking via their phone’s camera while browsing Dote. Hosts earn credits they can cash out or use to shop in the app, which stocks Gen Z favourites like Brandy Melville, Lime Crime and Aerie.

Lauren Farleigh, who started Dote in 2014, said she began developing Shopping Parties after realising the best-performing content was being created by Youtube vloggers like Summer Mckeen and Emma Chamberlain. She noted that Twitch, the Amazon-owned live streaming platform for gamers, had built an enormous audience, and figured Dote could too.

“The gaming world has caught on to use live stream as a form of entertainment and monetised it, but this hadn’t really been adapted for shopping,” she said.

Dote currently has 10 million active users, according to analytics platform App Annie. (The company came under fire in May when it hosted an influencer trip to Coachella and reportedly separated the influencers’ housing by race, and gave white influencers better accommodations. Dote said in a statement to BoF that it “absolutely did not separate our guests by race at any point during any of our trips.”)

Jasmin Corley, a 19-year-old influencer from San Francisco, says for shopping, she prefers it to Instagram because on that platform her followers can’t purchase directly from the app.

“On Instagram, I always get comments that people like my outfit, and want to buy it or whatever, but on Dote, I can actually be shopping with my audiences,” she said.

Hero, a start-up launched in 2015, connects online customers to store associates via livestream. Shoppers can chat with employees about price and fit, or ask to be shown around a store. Levi’s, Nike, Harvey Nichols, John Hardy, Chloe and Berluti are among the retailers to have signed onto the service.

“About half the week, stores are idle while there are tons of customers who need help,” said founder Adam Levene.“We’re solving a global issue because stores are underutilised.”

The company recently raised $10 million in a Series A funding round and has driven over $50 million in sales for its brand partners this year (the company makes commission off of products sold through the app).

Gap-owned luxury fashion boutique Intermix is using Hero in six boutiques. Customers who use Hero are 16 times more likely to make a purchase, said Intermix President Jyothi Rao. Customers who ask about an item’s fit are also less likely to return their purchase, she said.

In the sneaker world, NTWRK, a live streaming app with shoppable shows for sneakers, gadgets and streetwear, sells limited-edition products à la the drop model. It live streams about five times a week, with celebrities like DJ Khaled, Billie Eilish and Odell Beckham Jr. occasionally hosting. The app has about 500,000 active users.

“It seemed like a natural marriage,” NTWRK Chief Executive Aaron Levant said. “We’re creating urgency around a selling point, and the sneaker community is hyper passionate so they want to watch someone talk about the product.”

The gaming world has caught on to use live stream as a form of entertainment and monetised it, but this hadn’t really been adapted for shopping.

US live-stream shopping apps haven’t quite developed the same ecosystem of superstar influencers as their Chinese equivalents.

Yang has been live streaming her shopping adventures on ShopShops for over a year and has developed a loyal following that tune in for her shopping sprees.

As Yang worked the camera at Century 21 — dramatically smelling her hands after smothering them with Ahava lotion — two assistants worked the backend of the app, uploading product images and monitoring the livestream for questions and comments Yang could address.

“The audience really like my eye for stylish clothing and designer brands, and they also really like my commentary,” she said. “But mostly, they are here for the discounts,” she added with a laugh.

E-Commerce Is Boring. A Jeff Bezos-Backed Start-Up Wants to Change That.