Luxury’s Supply Chain in the Spotlight

This week, Bernard Arnault and Donald Trump inaugurated a new Louis Vuitton factory in Texas. More efficiently meeting local demand, the politics of ‘Made in the USA’ and the threat of future tariffs on European goods were likely key factors in the decision. But the fanfare also underscored on how luxury’s supply chain is coming under greater scrutiny and who’s best positioned to come out ahead.

Luxury’s Supply Chain in the Spotlight

This week, Bernard Arnault and Donald Trump inaugurated a new Louis Vuitton factory in Texas. More efficiently meeting local demand, the politics of ‘Made in the USA’ and the threat of future tariffs on European goods were likely key factors in the decision. But the fanfare also underscored on how luxury’s supply chain is coming under greater scrutiny and who’s best positioned to come out ahead.

Vuitton has quietly operated factories in the United States for decades. But the fanfare surrounding the inauguration, including a ribbon-cutting ceremony led by LVMH Chairman and Chief Executive Bernard Arnault and US President Donald Trump, put the moment — from the grazing cows to the awkward exchanges between the two leaders — in the spotlight for all to see.

More efficiently meeting growing demand from North American consumers, the politics of  ‘Made in the USA’ and the threat of future tariffs on European goods were likely the most important factors in the decision to open Rochambeau Ranch. But Vuitton’s Texas moment also underscored just how much luxury’s supply chain is coming under greater scrutiny — and not just for politicians focused on the symbolism of growing local manufacturing jobs.

Louis Vuitton began selling Texas-made bags from temporary facilities in 2017 and a report in the Wall Street Journal this week quoted a former employee who described working conditions there as “literally a sweatshop,” while some consumers have taken to social media to wonder whether US-made bags would be as desirable as those made at Vuitton facilities in France.

How and where luxury goods are made has always been a crucial part of brand storytelling. And major luxury houses like Vuitton, Chanel and Hermès have long traded on the cultural cache and perceived quality that accompanies products made by European artisans. But the rise of social media has put these practices under the microscope and allowed consumers to more easily see and discuss whether the behind-the-scenes reality matches the marketing narrative.

As a result, brands are being forced to share long-hidden details about their supply chains and ensure they stand up to scrutiny. This is especially true as sustainability and worker conditions — not just craftsmanship and country of origin — become bigger consumer concerns.

“There is instead a lot to be done to make the upstream processes more presentable,” said the Bernstein note. “Consumers are bound to be more interested, more knowledgeable and better informed in the future.”

As pressure grows, vertically integrated luxury brands, such as Louis Vuitton and Hermès, have a big advantage. The problem, according to Solca, is not when brands owns their factories, but when they don’t, as is common along the complex luxury supply chain.

“Many luxury companies only directly manage product development — all the processes that lead from the artistic sketch to a prototype and its technical specifications — while they outsource much of the actual manufacturing to third parties,” he explained.

Outsourcing is risky because brands have less control over operations at factories they don’t own. For example, the press is full of damaging reports of Chinese workers being mistreated at third-party factories in Italy where big-brand luxury goods are made, while some luxury brands continue to hide the true provenance of their products, assembling them in Asia and shipping them to Italy for finishing so that they can stamp “Made in Italy” on the label, practices that are risky in a world of increased digital transparency.

To solve the issue and make good on the promises they’ve increasingly made to both consumers and shareholders, luxury brands will need to move their manufacturing operations further upstream. But for many this is easier said than done. Some simply don’t have the capital to invest in their own factories. Plus, major players have spent the last few years scooping up European workshops. Of course, those with the finances can build their own factories from scratch, but they still require specialised workers, who are increasingly difficult to source.

Ultimately, increased transparency along the supply chain could spell better conditions for workers and higher quality products for end consumers. But it’s also another reason why that the large-scale companies that dominate the sector will keep getting richer — because they can afford to throw money at the problem. 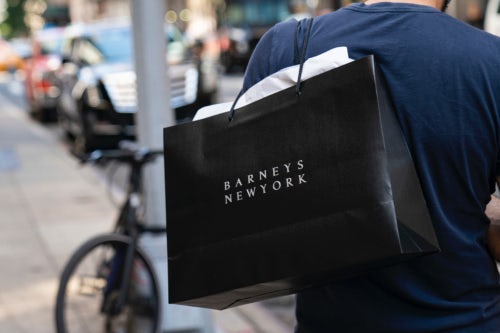 Authentic Brands Group bids $271 million for Barneys and plans to close all seven stores. The licensing group is the preferred bidder in an auction that runs until October 22. If the bid succeeds, liquidation could start soon after. Barneys filed for bankruptcy in August, after years of lagging sales. The primary cause of its bankruptcy, however, is the 72 percent rent hike at its nine-story Madison Avenue store, from $16.2 million annually to $27.9 million, which went into effect in January.

EU and UK reach agreement on Brexit. Northern Ireland’s DUP said it still can’t support the deal, but Boris Johnson needs the backing of the House of Commons to deliver Brexit on October 31. For the fashion industry, a no-deal Brexit is a worst-case scenario many hope to avoid. According to the British Fashion Council, a no-deal Brexit could cost the industry nearly £1 billion ($1.28 billion) because of tariffs. Other expenses could raise that figure even higher.

Dior apologises to China over map excluding Taiwan. The French luxury brand apologised after an online video clip showed a student questioning the map at a recruitment event in China. Dior is the latest of several Western organisations — including the NBA and Dolce & Gabbana — to come under fire for perceived slights to Beijing’s One China policy. These companies are having to tread carefully not to alienate consumers in one of their biggest markets, which is estimated to account for a third of current luxury sales.

Sportswear firm Li Ning's shares surge 200 percent. The Chinese brand, founded by former Olympic gymnast Li Ning, has more than tripled in Hong Kong trading this year. The company is benefiting from the growing popularity of sports fashion in China, according to Morgan Stanley, which raised its rating on the stock to overweight last week and lifted its share price target by 33 percent.

Hong Kong retail rents fall sharply. The July to September period has seen the sharpest quarterly decline since the Asian financial crisis in 1998. High street retail rents fell by 10.5 percent and overall high street rents are likely to decline by another 5 to 10 percent over the remainder of 2019, according to property consultancy CBRE. As protests continue, the government has urged landlords to offer rent subsidies to retailers and food and beverage businesses.

UK retail sales growth softens as department stores disappoint. Growth in retail spending is at its weakest in more than three years, raising concerns about the health of the economy in the run-up to Brexit. Sales in the 'non-specialised stores' category — which includes department stores — dropped by an annual 2.0 percent in the third quarter, the biggest decline since the first three months of 2009 when Britain was mired in recession.

US retail sales post first decline in seven months. Sales dropped 0.3 percent in September as households cut back spending on several categories including online purchases and hobbies. Signs of a deceleration in consumer spending, coming on the heels of data showing a moderation in hiring and services sector industry activity in September, could stoke financial market fears of a sharper slowdown in economic growth. 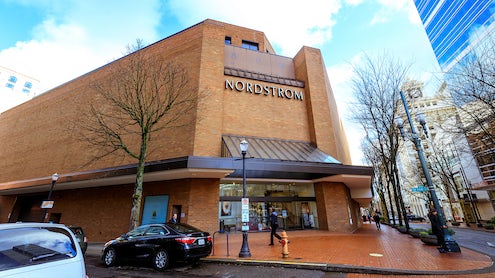 Nordstrom’s New York flagship bets on beauty. The new flagship, which opens October 24, covers two levels, one of which is dedicated to 110 services like Botox and LED facial treatments. Featured branded services, like Facegym spa treatments and Anastasia Beverly Hills brow services, will also be available. Retailers are increasingly leaning on beauty services to drive customers into shops as an increasing number of department stores struggle to stay in business.

Deciem plots next steps. After a tumultuous year, Chief Executive Nicola Kilner is gearing up to open a 70,000-square-foot Toronto headquarters, production facility and store. Deciem launched in 2013 as a multi-brand personal-care concept and now produces eight different skin-care, grooming, beauty, and supplement brands. The latest store will be stocked with its full product lineup. 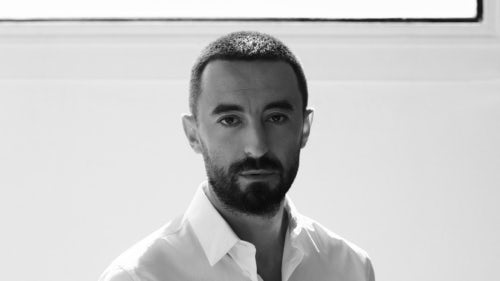 Designer Sophia Kokosalaki dies, aged 47. The Greek designer graduated from Central Saint Martins College and was known for her elegant take on drapery. She attracted a long list of celebrity clientele including Chloë Sevigny and Alexa Chung. In 2001, Kokosalaki collaborated with Topshop and, in 2002, she was enlisted to design the costumes and uniforms at the Olympic Games in Athens 2004. Her cause of death has not yet been disclosed.

Laura Ashley CFO exits after two decades. Sagar Mavani, who joined the company as group financial controller last year, will replace Seán Anglim as CFO, while the company struggles with a decline in online sales. The company swung to a full-year pretax loss of almost £10 million ($12.57 million) earlier this year. Anglim, who is also joint chief operating officer of the company, will step down by the end of the year.

Asos profits slump 68 percent on warehouse problems. The online fashion retailer's shares have also fallen 49 percent over the last year. Asos, which issued its latest profit warning in July, said it made a pretax profit of £33.1 million ($42.2 million) in the year to August 31 — in line with July's guidance of £30 million to £35 million but down from £102 million made in 2017 to 2018.

Snap launches dynamic ads to draw more advertisers. The tech company's new advertising strategy will help it compete for digital ad dollars in a market dominated by Google and Facebook. Snap's campaigns will initially reach only US Snapchat users, with a global rollout scheduled later. Snap remains a small player in the global digital ad market with 0.5 percent revenue share, compared with Google at 32 percent and Facebook at 21 percent.

Nike acquires Russell Wilson’s start-up TraceMe. The move indicates that the multibillion-dollar sports giant is extending its brand into digital media. TraceMe, which was an app that let fans engage with sports stars before turning into a full-blown service called Tally, is Nike’s most recent venture into the world of tech. Although the sportswear brand has collaborated with Apple in the past, the acquisition of TraceMe marks a new direction for Nike’s digital presence.