The designer celebrated Gucci’s centenary with a collection that was all about rebirth. 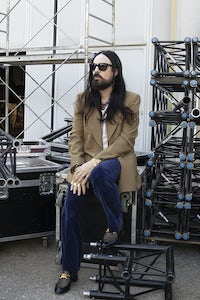 The designer celebrated Gucci’s centenary with a collection that was all about rebirth.

The most recent Lyst Index, a quarterly ranking of fashion’s hottest brands, had Gucci in the top spot again. Alessandro Michele wouldn’t have known that when he was designing his new collection, but the power of popularity was on his mind. It’s Gucci’s 100th anniversary and what should have been a year of celebration has been driven indoors by the global pandemic. But still, Michele was determined to throw a party to celebrate the brand’s enduring popularity, or pop, in his shorthand. So, working with director Floria Sigismondi, whose video resumé runs from David Bowie to Dua Lipa, he made his version of a pop video. “Like a music video in the Nineties, like George Michael, all those beautiful and crazy fashion things.”

The result, “Aria” debuted online Thursday afternoon. “An aria is the moment when the best singers start to sing at the heart of the opera,” Michele explained. “Everyone knows the aria even if they don’t know the opera. It’s the most popular bit of the story. So, this is my pop aria.” In which light, you could almost consider the collection Gucci’s Greatest Bits for the way it recognised some of the most memorable particulars of the brand, starting with Look 1, the red velvet tuxedo designed by Tom Ford and worn by Gwyneth Paltrow at the MTV Music Awards in 1996. “I just changed a little bit the shape of the shoulder,” Michele said. “I’m Italian and there are a few little obsessions in the way you stitch and construct.”

It seems necessary in pop culture now that everything has to be a “journey,” so “Aria” took us on one, very subtly, metaphorically, through Gucci’s first century, starting with entry to a nightclub. It was called the Savoy, a reference to London’s Savoy Hotel. From the beginning, Gucci, though Italian, was international in outlook. Its early customers would undoubtedly have been guests at the Savoy. Once inside the club, there was a barrage of paparazzi, all of them carrying vintage cameras, reflecting the sway Gucci held over the jet set in the mid-20th century. Next, the models traversed a long tunnel illuminated with thousands of lights, like a catwalk, echoing the Tom Ford Years. Then, everyone congregated in a dark room, heavy with sexual suggestion, pregnant with expectation. Finally, a door was pushed open and the models entered a fantastical garden to commune with sunlit nature: The Alessandro Michele Era.

The whole thing was set to a soundtrack of songs that featured the word “Gucci” in the lyrics. “I wanted to speak a very specific language about being popular, and Gucci is popular. That’s why I went back through all the crazy songs with the name,” said Michele. They eventually had a list of over twenty thousand lyrics. Lil Pump’s “Gucci Gang” and Rick Ross’ “Green Gucci Suit” were probably the most popular, but “Gucci Coochie,” Die Antwoord’s anthem for influencers, had the fiercest lyric: “She gets everything she wants / She gets everything for free…” Ford’s overhaul of the brand in the Nineties was an obvious touchstone for Michele. “Tom was the first one to understand all the symbols, all the powerfully attractive things that belong to Gucci,” he claimed. But there was also a comprehensive re-vision of Gucci’s equestrian heritage. The iconic horsebit ballooned into a breastplate. The hat, the harness, the boots, the riding switch and whip were key accessories. Michele acknowledged the strong fetish element. “Moving from an aristocratic equestrian world to a dark fetish club where people make love with sacred objects of fashion” was his own contribution.

Maybe people will come back to that when they’ve had time to reflect, because right now, social media has been on its hind legs all week about the Balenciaga “collaboration.” Except the whistleblower got it wrong. There was no collab. Reflecting on what he called “Gucci’s million rebirths” as he approached the centenary, Michele was very taken by the notion of inducing another one by conducting what he called “the most forbidden experiment in fashion”: having a conversation with another atelier, a storied French couture house to boot. In one of his rare forays into another designer’s world, he’d been in the audience for Demna Gvasalia’s debut at Balenciaga. “I wanted to go back to the things I loved in Balenciaga and let fashion speak the same language,” Michele said. “We need to speak with everybody, there should be no boundaries.” He added that he felt a distinct kinship with Gvasalia. “We’re both thieves of everything, in different ways but it belongs to both of us.” So he called him in Zürich to propose another affectionate act of thievery, and Gvasalia was delighted. But it wasn’t a collaboration, though Michele showed him the work in progress.

We need to speak with everybody, there should be no boundaries.

Michele was drawn to the idea of anatomy that Gvasalia inherited from Cristobal Balenciaga. “Close to the anatomy of a horse, rigid but also very attractive,” he clarified (sort of). You could see it in the hip action on some of the Gucci-monogrammed jackets and coats, more identifiably on the obviously logo-fied pieces. The most striking was the typically Gvasalia head-to-toe (jacket, skirt, leggings, shoes) that stamped Gucci’s signature Flora print with the Balenciaga logo. Runner-up? The co-branded shoulder-shrug parka that was the big hit of Gvasalia’s Balenciaga debut. It was wonderful, and I wish there could be more such hook-ups in the oh-so-precious world of fashion, even if Gvasalia’s role was more enthusiastic onlooker than active participant. (The Dries/Lacroix union is still the benchmark.)

Given that Balenciaga was second on the Lyst, I imagine there might be those who accuse Michele of currying cool favour. That would naturally follow on from the murmurings about Gucci losing its momentum, especially over the last year. “I love to listen to everybody,” Michele countered. “I always find the comments interesting, but there is nothing I have to protect. And I don’t need to be protected from anything. Creativity is such an incredible territory. You can go wherever you want. I feel myself in this job more than ever, I had so much fun with Floria and with the people of the studio, going through the most crazy things. The result may be more slick than ever, but it’s in my personal way. Going pop is Gucci, but I don’t want to replicate anything. That’s far from the idea I was building in my mind.” 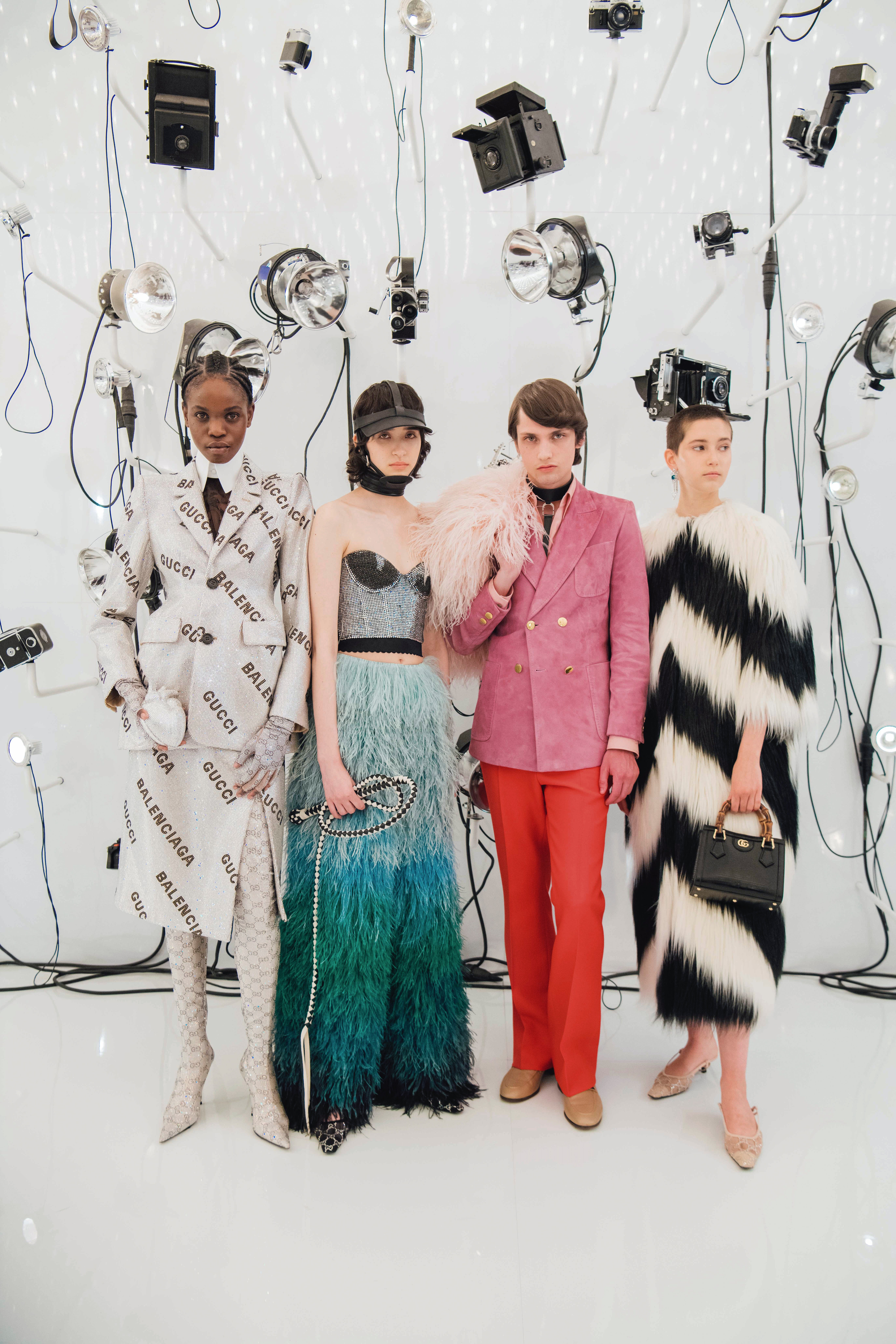 Still, Michele acknowledged that after six years, he had to look at something different. “I don’t want to repeat myself a million times, I don’t want to be bored by myself.” That slickness he mentioned was a distinct signpost for this collection. Its most obvious manifestation was in the casting of his 94 models. If the past was about Michele’s obsession with what he referred to as “strange, unexpected beauty,” the faces of “Aria” were “ordinary beauty you come across in the street, the most beautiful guy or girl in your school, the one you didn’t look at before.” Bluntly stated, eccentricity versus accessibility. “You go far from the things you’re obsessed with,” Michele mused, “otherwise you’re going to replicate things that are always the same. It’s a mission. I need to experiment. Also, I was thinking to go pop means to go for everybody.”

I don’t want to repeat myself a million times.

The clothes followed accessible suit. There was a directness, a sexiness, a glamour that distilled decades of Gucci. The fabulous tailoring, the party dresses, the seductive mesh of colours (the lilac suede jacket with vermilion trousers and ice pink feather stole ran close second to the green suede jacket with lavender rollneck and salmon pink pants), the ostrich, sequins, sparkle and glitter for any time of the day or night… Michele compared it to the spirit of a world after war, with people wanting to celebrate survival. “Put on a beautiful dress and go to the vegetable garden,” he enthused. “I love the countryside and my friends laugh because I always put on beautiful shiny things to go walking in the wildness of the forest. Shine is me, it’s Gucci, its everybody. People go crazy with things that shine.” The ugly/beautiful ambiguity that was the unsettling spice of Michele’s Gucci seemed quieted. “There’s still something ambiguous,” he insisted, “but it’s the kind of ambiguity that everyone can understand.” And if this wasn’t exactly a collection for “everyone,” I knew what he meant, because at the end of it all, we headed out into the garden, where nature was waiting.

“I’m thinking that I’ve spent six years deep in the mythology, in the subconscious of the brand,” Michele said. “Now, I’m ready to go outside into life, to feel the light.” He and Sigismondi agreed they wanted that light to be morning “with everything starting again.” So, when his models stepped into the garden, it was into a mote-speckled glow. White horses and peacocks roamed in a new Eden. 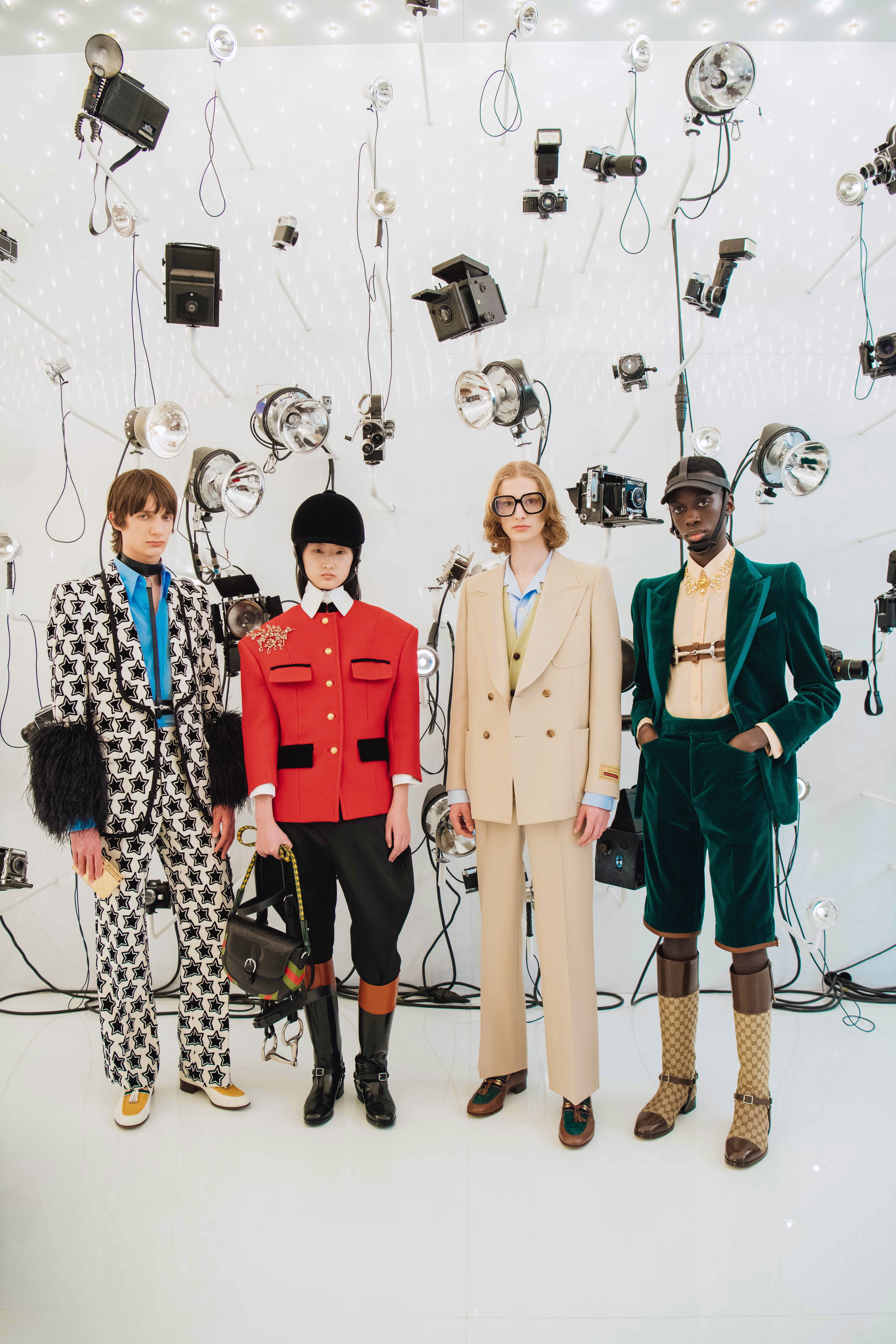 Throughout “Aria,” models carried a crystal minaudière modelled on a human heart. Michele imagined it as the shining pop grail of Gucci, passed down the decades to each designer. At the very end of the film, a young woman dressed in gold lamé pleats modelled after one of Marilyn Monroe’s most iconic looks, cast the heart heavenwards. “Giving it back to the universe,” said Michele.

He calls himself a medium. I won’t dispute that.

Editor’s Note: This article was revised on 16 April 2021. A previous version of this article said the collection contained Marabou and was set to a soundtrack whittled down from a song list that stretched beyond 2,000. This is incorrect. The collection contained ostrich feathers and the soundtrack was based on songs that feature the word Gucci, with the list of lyrics stretching to more than 20,000.

The State of Gucci

Why Gucci’s Alessandro Michele Is Shaking Up the Fashion Calendar