LONDON, United Kingdom — Earlier this year, H&M announced its aim to be 100 percent circular and renewable by 2030. The ability to recycle this quantity without degradation would mean endless yet sustainable fast fashion. But is it really feasible for one of the world’s largest fast fashion retailers — which reported revenues of over $2 billion in 2016 — to "close the loop" in a little over a decade?

By 2030 it is predicted that we will be using two Earths worth of resources and the demand for clothing is expected to have risen by 63 percent according to the Copenhagen Fashion Summit's recent Pulse of The Fashion Industry report written in collaboration with the Boston Consulting Group. As we hurtle along this trajectory, can we afford to put all our bets on being able to make current rates of fashion consumption sustainable?

Though improving recyclability is commendable and necessary, the circular economy is being marketed as bite-size incremental change rather than the systemic overhaul it is in reality. Consequently, steps towards a circular system made at a self-elected pace are in danger of becoming a method of guilt-free acceleration of consumerism. Closing the loop isn’t a reality yet, so shouldn’t we be reaching for the brakes instead of the accelerator?

The performance economy (otherwise known as the functional service economy) is a worthy alternative. Though an essential component of the circular economy, it is often sidelined for its seemingly disruptive nature.  Its pioneer, Walter Stahel, explains that in retaining goods and selling performance, rather than goods themselves (in other words, access over ownership business models), companies can incentivise a shift from linear to circular business models.

In a performance economy, consumers pay only for the value they extract from a good (the performance) as and when they use it, incentivising companies to refocus on what benefits the customer actually wants. The Ellen MacArthur foundation outlines several case studies, one example being a project initiated by architect Thomas Rau that purchased light as a service from Philips.

For the project, the use of artificial light was minimised by design: lighting was positioned closer to where it was needed; sensors were fitted so that artificial light was responsive to the fluctuation in natural light; and the building was designed to maximise natural light. Philips retained ownership of the parts so that they could be maintained efficiently and Rau had the option to upgrade the system with Philips recovering the parts that were no longer needed. Overall, Philips increased profits by providing long-term performance using fewer resources and Rau received more affordable light.

The focus on performance encourages innovation around fashion as an experience.

But what would the future of fashion look like within a performance economy? First, we must get to grips with what high performance means for fashion. It’s not just about keeping us covered and warm, but about experience, creative expression, novelty, quality and craft. In a performance economy, businesses are motivated to invest in creating not just physical durability but also emotional durability — lasting desirability. Through providing shared wardrobe access, much greater choice and curation can be provided at a lower cost. From a consumer perspective, Rent The Runway is the most prominent example of the post-ownership wardrobe. Having reached EBITDA profitability at the end of 2016 and over £100 million in revenue thanks to their "Unlimited" wardrobe service, Rent The Runway has validated this business model.

There are multiple challenges in adopting a performance economy. A wardrobe service must work with multiple designers to provide a curated choice of clothing. For a true performance economy, these creators should retain their creations and earn when they are in use so that they gain the monetary incentive for longevity. This means a new system of collaboration that could take an array of forms. Businesses involved will need to be agile as well as being able to afford the upfront costs of retained ownership

Additionally, a number of innovations conducive to a performance economy are currently unexplored by fashion rental companies. Design for post-ownership is underdeveloped. This could involve high performance recyclable materials, pre-empting damage, design-led methods of repair, and a design processes involving continuous modification. It could also involve technologies such as blockchain to track goods and importantly, measurement and feedback systems to continuously improve performance.

Though economically viable, the performance economy requires a shift from manufacturing to labour intensive, localised, processing, caring and mending, posing a problem in developed countries where labour is expensive. Stahel says sustainable taxation could be used to accelerate the change to a performance economy and create jobs. He proposes that renewable resources are not taxed but non-renewables are, and that labour, which is increasingly abundant due to population growth, is treated as a non-renewable. As the Paris Agreement comes into action, to curb emissions, more sustainable oriented taxation and legislation are likely to come into action and businesses should be prepared.

In a performance economy, at the end of their consumer life, goods would still be recycled and made into new clothes. Though customers’ use of garments would likely have to adhere to terms of use and can be penalised for misuse, the creator of the clothes would remain responsible for prevention of damage, washing and mending. Crucially, the focus on performance encourages innovation around fashion as an experience, which could even end up moving consumers away from the current materiality of clothing.

However, if virgin resource extraction remains unrestrained, resources will become increasingly scarce, resulting in price surges and volatility. Companies that sell electrical appliances must now, by European law, provide a free take-back service when they sell a new version of the same product, or join the Distributor Takeback Scheme. This type of legislation could be applied to many other industries.

The shift towards a performance economy may seem idealistic, but on the demand side, the post-ownership movement is growing strong with 58 percent of millennials in London interested in renting clothes, according to a study conducted by Australian mall operator Westfield. As with cars, Gen-Y and Gen-Z are happy to be rid of the burdens of ownership. For millennials, experience over ownership is the new norm, and with far less spending power, as with homes, clothes ownership may soon be seen as an unnecessary luxury of their parents’ generation. The post-ownership movement also ties nicely into the wellness trend, as these cohorts tend to seek enriching experiences rather than materialism.

Access over ownership could become the new reality and fashion brands and retailers should consider what it would mean for their businesses. The performance economy has the potential to increase profits but the sharing economy presents risk. A peer-to-peer rental or resale platform could be significantly disruptive to fashion brands and retailers if successfully scaled.

But why is the performance economy so superior to selling goods with a more circular approach? The crux of the matter is that through retaining ownership, creators remain accountable for the goods they create, avoiding an unreliable general public. The efficiencies gained throughout the lifespan of the goods and beyond becomes profit, incentivising responsibility from creators.

Unreliable consumers and the limitations of recycling

Additionally, our technological ability to achieve full recyclability is also questionable. H&M is a leader in textile recycling but there is still a mountain to climb. The complexity of the mix of materials used in certain garments is a major challenge but this could mostly be overcome by changing the way that garments are designed. In 2016, 25 percent of their materials were from recycled or sustainable sources.

The more pressing challenge is the degradation of fibres, ease of the recycling process and eventual biodegradability. Currently only 0.1 percent of clothing that is donated by consumers as part of its much-publicised collection drives is actually recycled. That is why H&M is investing into new solutions: fabrics made from manure, citrus and grape waste. But to scale these ideas will take time.

Even if we do manage to close the loop, we are letting resources be abused. Consumers are generally unable to measure efficiency gains and afford the upfront costs of buying for long-term value. Despite the best instructions, it’s difficult to use, maintain and repair with best practice for longevity as it simply isn’t the average person’s priority. The Fashion Revolution organisation says consumers wear items an average of just four times before discarding them. A recent study by UK supermarket and clothing retailer Sainsbury’s found that 75 percent of consumers in the UK discard clothes as domestic waste even though 95 percent of these items can be reused or recycled.

We need to accept that non-biodegradable resources are here to stay but that an item of clothing doesn’t have to be life-long love affair by a single owner. We should instead be designing a system that caters for dynamic rather than static wardrobes. Static wardrobes lead to idle capacity — the clothes that are sitting in our wardrobes. However good our recycling processes get, the problem of exclusive ownership over extensive wardrobes would remain unsolved.

We need a drastic overhaul of the system and improved recycling doesn’t cut it. Neither does the unrealistic mantra of more conscious ownership: buy less and cherish forever. Ultimately we need to understand that consumerism is not the only option to sustain an economy and alternatives are not just necessary but have the potential to provide a better option for all. 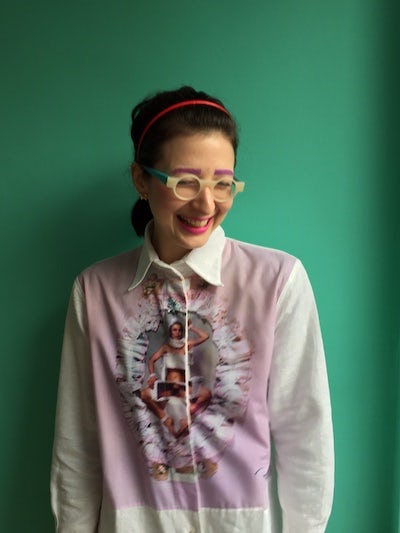 On the surface, my start up, HIGHER, rents clothes, but the motivation has always been to practice an alternative to consumerism that can cultivate creativity in a more responsible way. With mass extinction and climate change under way, over-consumption is the underlying factor we must tackle, especially within fashion.

Until now, I haven’t had the chance to fully explain my point of view. Working with Robin Mellery-Pratt from the BoF editorial team to formalise my thoughts and present them to the global fashion community was invaluable. This is an opportunity to raise awareness of the reasoning behind what I’m doing and enter a dialogue with like-minded people. It is a call for guidance and support to progress these ideas as well as to encourage others to follow. I would like to be part of a collaborative ecosystem shaping a more creative and sustainable fashion future.

The opportunity to voice opinions shouldn’t just be for established professionals but also for emerging talent paving their way with bold ideas. Initiatives such as Future VOICES are imperative for the industry to nurture innovation and embrace change.