How can the jewellery industry engage with the UN’s 17 Sustainable Development Goals? BoF hosted a panel discussion in partnership with Chopard to investigate, featuring Cherie Blair, the UN’s Lene Wendland and Phillipe Fornier, general secretary of the Swiss Better Gold Association, among other esteemed peers.

BASEL, Switzerland — With a complex and opaque supply chain — which often involves the shipment of gemstones in and out of numerous countries as they are mined, cut, processed and polished — the $148 billion jewellery industry is notoriously difficult to regulate. As a result, the UN estimates that over 5 million women and children are employed illegally in mines. There are also severe ecological ramifications. Over 20,000 tonnes of mercury are estimated to be released illegally into the environment every year within the global artisanal and small-scale mining eco-system.

To raise awareness of these issues and stimulate a dialogue on sustainability within the jewellery industry, in partnership with Chopard, BoF hosted a panel discussion on how the industry can adopt the United Nations’ 17 sustainable development goals (SDGs), with Julianne Moore, Colin Firth, Arizona Muse and Chinese singer and actor Roy Wang at the Baselworld watches and jewellery fair.

The ambassadors were in attendance to celebrate Chopard’s market leading announcement that it will only use ethically sourced gold in its supply chains from July 2018. “We have to spread the message that it is possible to do our business in a different way. Because if the consumers begin to ask more, then the companies are obliged to do it and the countries are obliged to follow,” said Chopard co-president Caroline Scheufele.

Introduced by Scheufele and Eco-Age’s Livia Firth, the panel discussion was moderated by Imran Amed, founder and CEO of The Business of Fashion. The esteemed experts included: Lene Wendland, the advisor on business and human rights in the office of the United Nations’ high commissioner for human rights; Pamela Gillies, president and vice chancellor of the Glasgow Caledonian University; Cherie Blair, a leading human rights lawyer and campaigner for gender equality; Phillipe Fornier, general secretary of the Swiss Better Gold Association and Nöella Coursaris, the founder and chief executive of Malaika, a foundation focused on educating and empowering girls in the Congo.

Involving Businesses in the SDGs

“The SDGs are the UN’s global agenda for sustainability, it is a plan of action for people, planet and posterity. There are 17 goals and the core message is: leave no one behind,” explained Wendland. Designed to tackle systemic human rights exploitation, ecological depravation and global inequality, the SDGs are ambitious. However, in contrast to their predecessors, the Millennium Development goals which expired in 2015, the SDGs have been praised for their inclusivity towards global business.

This is a timely development, as cash strapped western governments reduce the amount of money they dedicate to international aid, and consumers show signs that they increasingly expect the brands they buy from to be ethically conscious, the changing funding environment around NGOs will make the role of businesses in achieving the goals fundamental. 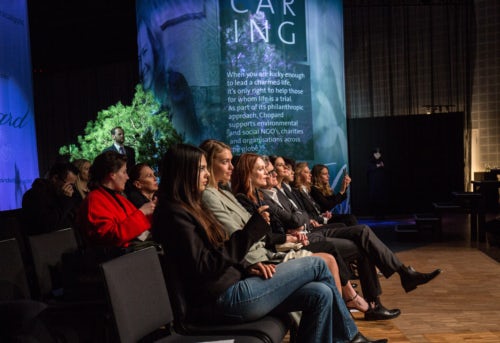 “There has been a huge shift in the perception of the role of business since 2000, when the Millennium Goals were adopted… which led into a much more active participation [by business] in the development of the SDGs than was the case 15 years earlier,” continued Wendland.

Due to the 169 targets that collectively make up the 17 SDGs, progress can also now be much more effectively measured. “What I love about the SDGs is there are intermediary things that we can measure. We now have evidence that we can share with businesses, that shows them that if they don’t engage with the goals then their profitability and their productivity will suffer,” says Pamela Gillies. “Paying more to employees on the ground, and creating educational and health opportunities, can impact productivity by 4.2 percent. Measurement is critical, it’s the evidence base that can actually shape a new future — even for the recalcitrant companies,” she continued.

Sustainable leaders in their industry, co-presidents of Chopard, Scheufele and her brother Karl Friedrich are far from recalcitrant. Their family’s jewellery company began its journey towards sustainability following a collaboration with the World Wildlife Foundation in 2013, where they became aware of the potential impact of their business practices. “We have much more to do for our planet, especially from our industry,” says Scheufele. “A rough diamond has sometimes been under the ground for 1.5 billion years and we have a responsibility to work with it in the best way,” she continued.

Over five years, Chopard has entered into strategic partnerships with Gemfields to sustainably source emeralds, fair-mined gold association ARM, and co-operative mines in Colombia and Bolivia. “Every year at Cannes for the green carpet collection my aim is to add another gemstone, one more facet of the industry,” said Scheufele. Although the adoption of more sustainable business practices has not been without challenges, she believes sustainability makes business as well as moral sense.

"As one of the panellist explained, this can really be an opportunity and you can actually be more profitable if you do it differently. There are some examples that have been set and I think the companies that start earlier are probably going to have a head start because one of these days there will be more law,” said Scheufele.

“I really applaud what Chopard announced today,” said Cherie Blair. “There are so many beautiful things here… but if you know that beautiful thing is created on the back of someone who is exploited in the mines where the gold comes from, or where the diamonds are being polished, or in the factories that make the boxes, then they lose their lustre.”

Both the panel and Chopard’s celebrity ambassadors acknowledged the growing role of customers in getting companies to play a role in the sustainable goals. “There is definitely a social movement today. Customers, especially young customers are really interested in sustainability,” said Gillies, whose sentiments were shared by actress Julianne Moore.

“I am global citizen, we all are, and I believe we have a responsibility to everyone in the world," the actress told BoF. "I am no different from any other citizen who is engaged with these issues, I just have a public platform. What is happening today in the world is that we are demanding transparency kind of everywhere: certainly in my business, with salaries and behaviour and ethics in general. So if I have the opportunity to use that platform for things that I care about, then why not?”

The lawyer also sees signs of stricter regulation and growing global transparency. “It is about getting ahead of the curve [for businesses]. Because I don’t think we are going to see the end of [higher obligations to report business practices]. I think we are going to see governments taking more interest in this. There is a European directive coming in, and the scrutiny that that will lead to is a challenge, but it is also an opportunity,” she explained.

Expanding and strengthening the effective regulatory environment will be critical to the SDG’s success. This is especially relevant to the jewellery and mining industries, as many of the raw materials originate in countries with poor human rights records and a lax adherence to the rule of law. Panelist Phillipe Fornier is acutely aware of the challenges in implementing the international standards in many of the relevant geographies and shared his experiences.

“We have to start in the places where there is good governance, like Peru, or Colombia and Bolivia where the authorities are supporting us. We realised the reality on the ground and the standards expected by trade certification schemes… the gap is far too big most of the time, and that has been a big obstacle in scaling up,” Fornier explained. Given the scale of the issues the SDGs are designed to tackle, iterative solutions capable of being implemented on the ground and eventually progressing to higher standards are most effective. “We created a ‘minimum criteria’ to act as a bridge towards those schemes. This way we can give miners access to the international markets at an earlier stage, where they will see the benefits and improve their practices much faster.”

Noella Coursaris believes companies should invest more in the communities and countries where the raw materials are located. “Mining companies must listen to the communities on the ground, listen to what they want and what they need. They want to work in good conditions, they want to make a good living. The young generation make up 60 percent of the population in Africa, and they do not want to be the beggars of the mining industry and global supply chain. More than 7 million children do not go to school in the Congo… They want solutions. They want to be educated.”

Watch the full discussion above and get involved in the discussion in the comments section.