Ready for Action at Proenza Schouler

“We wanted to represent New Yorkers getting out there and saying something meaningful,” said the designers of their cult-like presentation. “It’s time to be strong.” 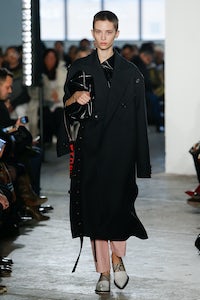 Ready for Action at Proenza Schouler

“We wanted to represent New Yorkers getting out there and saying something meaningful,” said the designers of their cult-like presentation. “It’s time to be strong.”

NEW YORK, United States —  The way people took to the streets all over the world this past month was a inspiring glimpse of galvanised communities turning action into activism. It certainly had a huge impact on Lazaro Hernandez and Jack McCollough. “We wanted to represent the energy of New Yorkers getting out there and saying something meaningful,” said Hernandez, eyes glistening with fervour, after a fierce Proenza Schouler show on Monday afternoon.

The duo’s collections are usually a celebration of American craft in some (often arcane) form or another, but here, there was a hard-edged, tight-belted urgency that cut through the flimflam. If not quite dressed for the barricades, at least ready for action. The asymmetry, the cutaways suggested clothes pulled sideways by a fearsome forward momentum. It was underscored by another fantastic, empathetic soundtrack from Michel Gaubert and Ryan Aguilar, which alchemised anger into Sonic Youth’s beautiful noise.

It wasn’t a beautiful collection by any conventional measure. Take the shiny leather the designers used in wrapped dresses and forbidding coats. It looked like repurposed trash bags. Toecaps were bound in tape. “Refuse as beauty,” Hernandez called the effect. “It’s definitely not about sitting round in a bathrobe and slippers at home.”

In a string of striking effects, one that stood out was a lattice of latex-coated guipure lace. Another was a sheath of baby blue sequins (industrial, not couture) veiled in a sheer knit overlay. The queasiness of that was matched by a leather wrap dress in a shade of dead salmon pink. Confrontation was king (or queen).

“It’s time to be strong,” said Hernandez. The intensity of the presentation was almost cult-like. The designer acknowledged that as a reference point. “But cults are a utopian community,” he added. Then someone else raised Proenza Schouler’s upcoming re-location to Paris, suggesting they'd be leaving behind the idealistic ardor that had shaped this new collection. “This is us giving New York some love before we do that,” Hernandez said. But something tells me that'll be the love that keeps on giving, for the next four years at least.